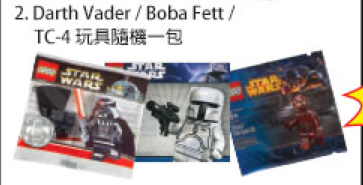 Bkctsang on Eurobricks has reported that the Hong Kong Toys R Us is having a promotion for the first 150 customers who spend more than HK$1200. Those lucky customers will be randomly given a LEGO Star Wars polybag which includes a choice from the Chrome Darth Vader, the White Boba Fett, and a new TC-4 minifigure. The TC-4 is a very obscure character in the Star Wars universe who was owned by Senator Palpatine. It was only mentioned in books and was even cut from Episode I. We’ll see in a few months if the TC-4 polybag is this year’s May the Fourth LEGO promotion or not.