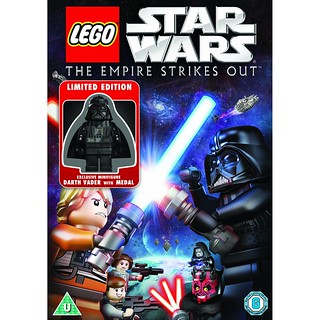 The box art and exclusive minifigure for the LEGO Star Wars: The Empire Strikes Out DVD is now available for everyone to see. As we’ve speculated before, the minifigure included with the DVD is Darth Vader wearing a medal much like the Luke Skywalker and Han Solo minifigures from the DK LEGO Star Wars Encyclopedias. The 22-minute animated film will be released on March 26, 2013 and can be pre-ordered at Walmart

. It will be available in the UK on March 18 and France on April 3. 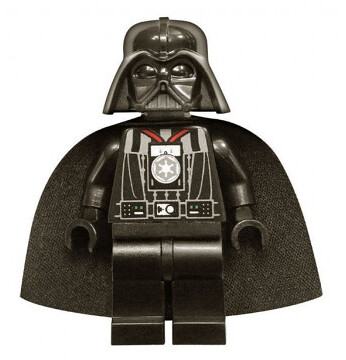 Packed with Humor, Action and Fun – and an Exclusive Darth Vader LEGO Minifigure!

HOLD ON TO YOUR BRICKS….FOR AN ALL-NEW ANIMATED ADVENTURE!

Your favorite characters are back to save the galaxy in LEGO® Star Wars®: The Empire Strikes Out™. The heroes of the Rebel Alliance including heroic Luke Skywalker, swaggering Han Solo and steadfast Princess Leia have no time to celebrate their victory over the Empire as a new Imperial threat arises. But as Jedi-in training Luke embarks on this next mission, he discovers that his celebrity status as a “Death-Star-Blower-Upper” can be a double-edged lightsaber when he’s constantly mobbed by crazed fans. So much for secret missions! Meanwhile, Darth Vader and Darth Maul are locked in a hilarious “Sith-ling” rivalry as they compete for the Emperor’s approval. It’s an action-packed comic adventure that’s out of this world!