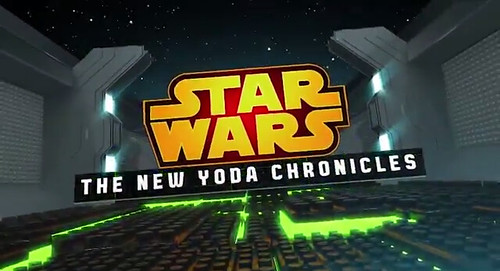 Last year, we were introduced to the LEGO Star Wars: The Yoda Chronicles which was a four part animated series on Cartoon Network. We were also introduced to a new character named Jek-14 who as a Force-sensitive Sith clone created by Count Dooku.

There is now a new Disney series that is renamed to LEGO Star Wars: The New Yoda Chronicles which is set to air this Saturday on Disney Channel at 9pm ET/PT and Sunday on Disney XD at 7pm ET/PT. Watch Disney XD users will get a first look at the episode tomorrow, Friday May 2nd. The New Yoda Chronicles has the same kind humor as previous LEGO Star Wars shows. The first episode is titled “Escape from the Jedi Temple.”

As seen in the trailer, the Emperor debuts his new theme — “The Imperial March” — and doesn’t react well at its lukewarm reception. Han, Chewie, Luke, Leia, Yoda, and the entire gang (including a blaster-toting C-3PO) are back, ready to take on Darth Vader and the Empire.