A few weeks ago, we reported that the LEGO The Hobbit Lake-Town Guard Polybag (30216) was seen at Toys R Us stores. They were also online but everywhere I checked, they it was sold out or wasn’t even available yet. Yesterday, I decided to take a trip to my local TRU since it was in the neighborhood and lo and behold, there was a whole rack full of them. I picked up a couple and here’s the review of it. The polybag contains of 31 pieces and has been selling for $4.99 each. The set contains two small builds and a Lake-Town Guard minifigure. 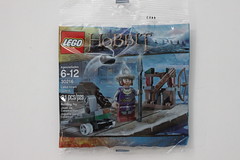 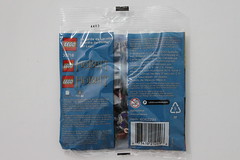 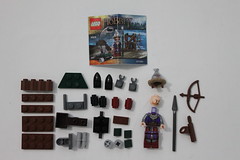 . He wears a purple outfit with printing on both sides of the torso. That printing also goes down halfway on the legs which includes some chain mail printing and the rest is solid dark red. He has a single-sided head with a goatee printing. The hat/helmet is one solid piece which has a fish tail shape at the top. In the middle of the hat is some fur lining with ear flaps similar to a ushanka. The Guard has a variety of weapons including a bow and arrow and a spear. 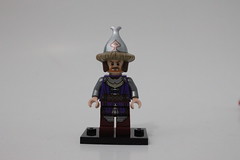 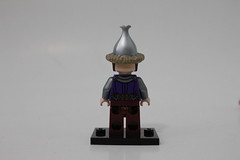 As I mentioned before, there are two parts to the build. One is a small weapons rack/post and the other is a catapult. The weapons post is a simple structure that holds all of the Guard’s weapons. The catapult is able to launch 1×1 round bricks and can simulate being pushed with the modified 1×2 brick with handles in the back. 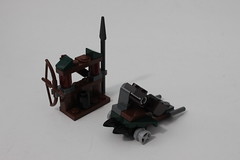 Overall, the Lake-Town Guard polybag is a pretty nice set especially if you’re trying to build a whole army of the Guards. Again, the polybags are found at select Toys R Us stores for $5 which is cheaper than on Bricklink particularly if you’re just looking for the minifigure themselves. They were also found on TRU’s website for a short time before selling out. You may want to sign up to be notified when they are back in stock. 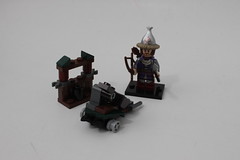