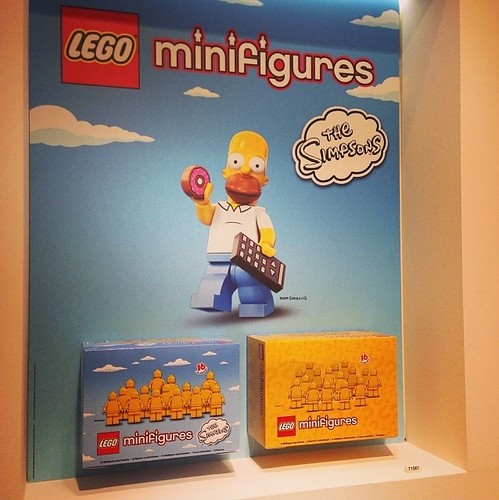 Amazon.uk may have given us a clue of which characters are included in the LEGO The Simpsons Collectible Minifigures (71005).

Woo-hoo! It’s The Simpsons! The LEGO Minifigures series continues with this great collection of 16 of your favorite characters from TV’s longest-running comedy. There’s Homer, Marge, Bart, Lisa, and Maggie Simpson, as well as Grampa, Ned Flanders, Ralph Wiggum, Nelson Muntz, Apu Nahasapeemapetilon, Chief Wiggum, Krusty the Clown, Itchy & Scratchy, Mr. Burns and Milhouse. Each The Simpsons minifigure comes in a sealed ‘mystery’ bag with its own special accessories, display plate and collector’s leaflet. Buy a bag, open it up and see which one you get!

One thing to note about the list above is that some of the characters are different from what was reported last year from Nerdly.co.uk. They listed Moe as one of the minifigures but he isn’t on the list above so we’ll have to see which one is correct. I’m guess he won’t be cause of the job that he has as a bartender which isn’t really suitable for children.