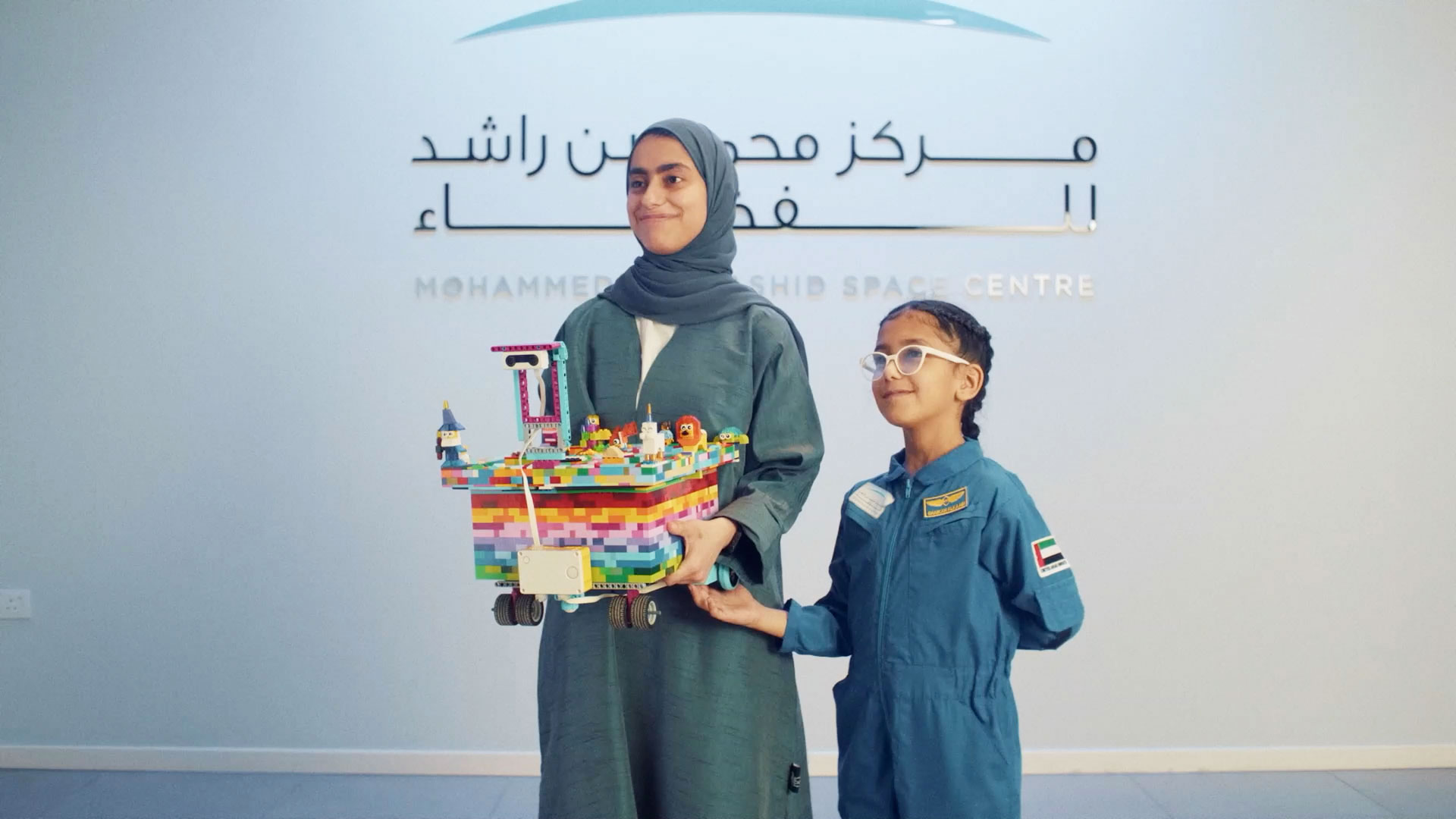 Yesterday was the United Nations International Day of the Girl and LEGO has announced that they are committed to making LEGO play more inclusive and ensuring that children’s creative ambitions are not limited by gender stereotypes. This also marks the launch of a new LEGO campaign called Ready for Girls which celebrates girls who rebuild the world through creative problem solving. There have been articles put yesterday that are misconstruing what the campaign is about and say that this is the end of the LEGO Friends line. LEGO has released a statement about that on the Ambassador Network.

LEGO Friends isn’t going anywhere. Next year’s LEGO Friends portfolio will have the most male figures we have had in our assortment to date. As well as gender, we are also increasing the variety in our LEGO Friends characters with more older and younger characters (including the microdoll).

We are also looking into representation for our Minifigures. Currently we have a larger proportion of male minifigures across the portfolio, but we remain committed to increase the number of female characters as we’re fully aware of how important it is to ensure children are able to reflect themselves in the toys they play with.

The LEGO Friends line celebrates their 10th year anniversary next year which is one of the few original IPs in LEGO’s evergreen portfolio. I’m sure LEGO will be doing something to celebrate that while keeping with their promise of making LEGO play more inclusive.

Billund, October 11th: New research commissioned by the LEGO Group reveals that girls today feel increasingly confident to engage in all types of play and creative activities, but remain held back by society’s ingrained gender stereotypes as they grow older. The study was carried out by the Geena Davis Institute in recognition of the UN’s International Day of the Girl and to mark the launch of a new LEGO® campaign, ‘Ready for Girls’, which celebrates girls who rebuild the world through creative problem solving.

The research, which surveyed nearly 7,000 parents and children aged 6-14 years old in China, Czech Republic, Japan, Poland, Russia, UK and USA highlights the need for society to rebuild perceptions, actions and words to support the creative empowerment of all children.

The research findings show that girls are ready for the world but society isn’t quite ready to support their growth through play. Girls feel less restrained by and are less supportive of typical gender biases than boys when it comes to creative play (74% of boys vs. 62% of girls believe that some activities are just meant for girls, while others are meant for boys), and they are more open towards different types of creative play compared to what their parents and society typically encourage. For example, 82% of girls believe it’s OK for girls to play football and boys to practice ballet, compared to only 71% of boys. However, despite the progress made in girls brushing off prejudice at an early age, general attitudes surrounding play and creative careers remain unequal and restrictive, according to this research:

For most creative professions, parents who answered the survey imagine a man, regardless of whether they have a son, daughter, or both. They are almost six times as likely to think of scientists and athletes as men than women (85% vs. 15%) and over eight times as likely to think of engineers as men than women (89% vs. 11%). The children surveyed in this research share these same impressions except girls are much more likely than boys to consider a wider range of professions to be for both women and men.

Our insights further indicate that girls are typically encouraged into activities that are more cognitive, artistic and related to performance compared to boys who are more likely to be pushed into physical and STEM-like activities (digital, science, building, tools). Parents from this study are almost five times as likely to encourage girls over boys to engage in dance (81% vs. 19%) and dress-up (83% vs. 17%) activities, and over three times as likely to do the same for cooking/baking (80% vs. 20%). Adversely, they are almost four times as likely to encourage boys over girls to engage in program games (80% vs. 20%) and sports (76% vs. 24%) and over twice as likely to do the same when it comes to coding toys (71% vs. 29%)

On International Day of The Girl, the LEGO Group is calling on parents and children to champion inclusive play. To help, they have developed a fun 10-step guide and invite parents to share photos of their child’s LEGO creations against a pre-defined AR backdrop featuring the words ‘Get the World Ready for Me’.

In addition, the LEGO Group has made short films celebrating inspiring and entrepreneurial girls from the United Arab Emirates, United States and Japan, each of which are already rebuilding the world through creativity.

Fatima & Shaika (18 and 8, UAE) Fatima is the UAE’s youngest inventor. Her sister Shaika loves space and wants to be the first woman on the Moon.

Chelsea (11, USA) is the founder of Chelsea’s Charity, where she gives away free art supplies to children in need so they can creatively express their emotions and overcome challenging times.

Mahiru (11, Japan) is a key member of SEEDS+, a school marching band that exists to bring joy through music and creativity and rebuild how her city is portrayed after the difficult time it’s been through.

The campaign will be further amplified through local partnerships and activity in several locations.

“As a Mom of three children, I have long admired the LEGO Group and I’m heartened by their global commitment to this study to inform how we can dramatically inspire creativity in girls through play and storytelling,” said Geena Davis, Founder of Geena Davies Institute on Gender in Media. “We also know that showing girls unique and unstereotyped activities can lead to an expanded viewpoint of possibilities and opportunities.”

The role of LEGO play

The LEGO Group believes in the value of learning through play and that the development of 21st century skills from LEGO play are equally relevant to all children.

While many parents perceive the LEGO brand as a good example of an inclusive toy brand, LEGO play is still considered more relevant to boys than girls, with 59% of parents saying they encourage their sons to build with LEGO bricks compared to 48% who say they encourage it with their daughters. This view became more pronounced when parents were asked to complete an implicit bias assessment and 76% said they would encourage LEGO play to a son vs. 24% who would recommend it to a daughter.

“The benefits of creative play such as building confidence, creativity and communication skills are felt by all children and yet we still experience age-old stereotypes that label activities as only being suitable for one specific gender. At the LEGO Group we know we have a role to play in putting this right, and this campaign is one of several initiatives we are putting in place to raise awareness of the issue and ensure we make LEGO play as inclusive as possible. All children should be able to reach their true creative potential,” says Julia Goldin, CMO LEGO Group.

The ‘Ready for Girls’ campaign aims to help girls rebuild the story and welcome more girls to LEGO building, ensuring they aren’t losing out on the benefits of LEGO play due to societal expectations. The company will ensure any child, regardless of gender identify, feels they can build anything they like, playing in a way that will help them develop and realize their unique talent.

Ensuring more inclusive play and raising the debate around gender norms is critical, not just for girls but for any child. The LEGO Group knows that boys are also battling prejudice when it comes to creative play and playing with toys that are traditionally seen as being for the opposite sex. 71% of boys vs. 42% of girls say they worry about being made fun of if they play with a toy typically associated for the other gender.

The company is committed to making LEGO play more inclusive and ensuring that children’s creative ambitions – both now in the future – are not limited by gender stereotypes. We know there is work to do which is why from 2021, we will work closely with the Geena Davis Institute on Gender in Media and UNICEF to ensure LEGO products and marketing are accessible to all and free of gender bias and harmful stereotypes.