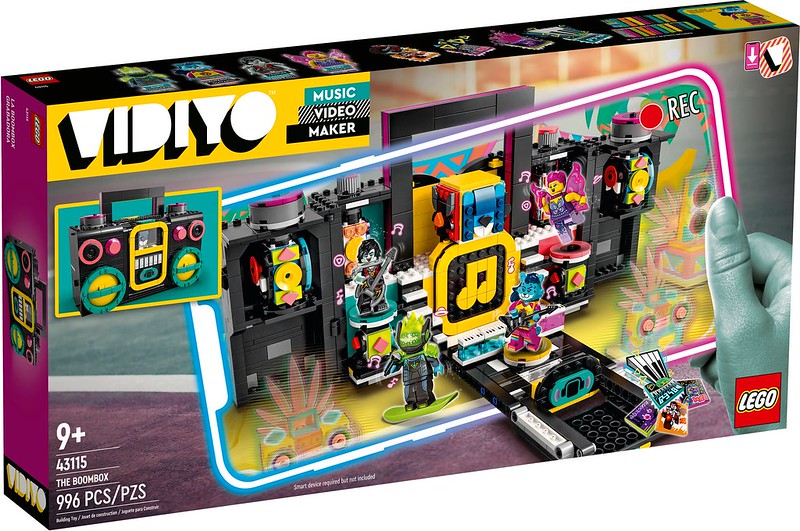 Launched in January 2021, LEGO® VIDIYO™ is a playful music video maker experience designed to help children unleash their creativity. A brand-new AR enabled play theme that allows children to dream big by directing, producing and sharing their own music videos, using tracks from UMG’s unrivalled artists across the globe.

Adding to the excitement of today’s announcement are five stage models that accompany various BeatBox genres: a Candy Castle Stage, Robo HipHop Car, K-Pawp Concert, Punk Pirate Ship and last but not least The Boombox that opens up to reveal a stage setup that’s perfect for flashy performances and on-the-go fun as any classic boombox. Each stage Model not only gives kids a brick built background but unlocks exciting digital backgrounds and speakers that you can customise in your music videos’

Speaking about these sets, LEGO Design Manager Ross Christopher Haynes says: “We’re thrilled to be unveiling these fantastic stage models as part of the LEGO VIDIYO line-up because they demonstrate the harmony between physical LEGO building and digital play. Not only are they fun to build and play with, with the minifigure band members, but they also serve as ideal backgrounds to add extra flair to kids’ videos!”

With this second drop, fans are introduced to two new BeatBoxes – Metal Dragon and Folk Fairy – each of which contains a minifigure representing the musical genre, a scanning-stage, two special BeatBits (which are unique to the specific BeatBox) and 14 randomly-assigned BeatBits.

Not only can children create exciting new music videos with the new BeatBoxes, but they can also add the characters into their existing bands or create new bands with any combination of characters from the eight BeatBoxes – who says you can’t have a Monster Metal band with a Pirate Punk guitarist and Fairy Folk singers? Everything is possible with a little imagination, and the new BeatBoxes open up even more opportunities to get creative with a wider range of outfits and styling, album covers, audio-visual effects, and dance moves!
Lifestyle image showcasing the LEGO VIDIYO music maker AR experience
Funky Bandmates

Also joining the line-up are twelve fun and funky new Bandmates, each of which comes with one unique BeatBit as well as two randomly selected BeatBits. Each BeatBit offers a new way for kids to customize their videos by adding surprising and unique twists – from Alien Plants to Acoustic Guitar sounds and even some Dancing Flamingos. The possibilities are endless, and no two videos will end up the same!

With the addition of these Stage Models, BeatBoxes and Bandmates there are now 134 unique BeatBit effects that kids can add to their collection in order to make the most epic music videos they can imagine and dream up.

The full list of BeatBoxes, Bandmates, and Stage Models introduced to the world today include:

LEGO VIDIYO pulls together physical LEGO® elements, music tracks and augmented reality to expand children’s creativity through play and music. Each product is designed to be played with alongside the free VIDIYO app, giving kids the tools to direct, produce and star in their own music videos. The initial launch offered six BeatBoxes covering a range of musical genres and 12 Bandmates with a variety of BeatBit effects. This latest product news introduces even more opportunities for kids to unlock their creativity with VIDIYO’s totally interchangeable system that now boasts a total of eight unique BeatBoxes, 18 Bandmates and 46 unique VIDIYO characters that kids can bring to life with the smashing selection of 134 BeatBit effects – Horse Carousel, Monster Organ, Magic Spell and Trapped in Jelly to name just some of the new BeatBits.

In February, Universal Music Group’s Astralwerks label and the LEGO Group teamed up to introduce L.L.A.M.A to the world. L.L.A.M.A, whose name is an acronym for Love, Laughter And Music Always, is the first artist to release a song via VIDIYO, the infectious “Shake,” which features three-time GRAMMY® winner NE-YO and newcomer Carmen DeLeon.

Along with the new products being announced today, UMG continuously updates and adds tracks, featuring its unrivalled artists across the globe, to the VIDIYO app. Each song has been programmed to work intuitively with all the BeatBits ensuring they link harmoniously, including special music effects that match the beat of the track, giving children an incredible level of creative audio customization.

It has been a busy spring for L.L.A.M.A, having featured on Spotify’s ‘New Music Friday’ in 20 countries and Apple’s ‘New Music Daily’ in 41 countries and appeared in Rolling Stone, Paper Mag and People, the DJ followed up with his television debut on both The Voice in the UK and Nickelodeon’s Teen Choice Awards in the US. He finished the month dancing on the steps of the Sydney Opera House with INXS and Baker Boy, filming a video for the band’s global hit single, “New Sensation.” 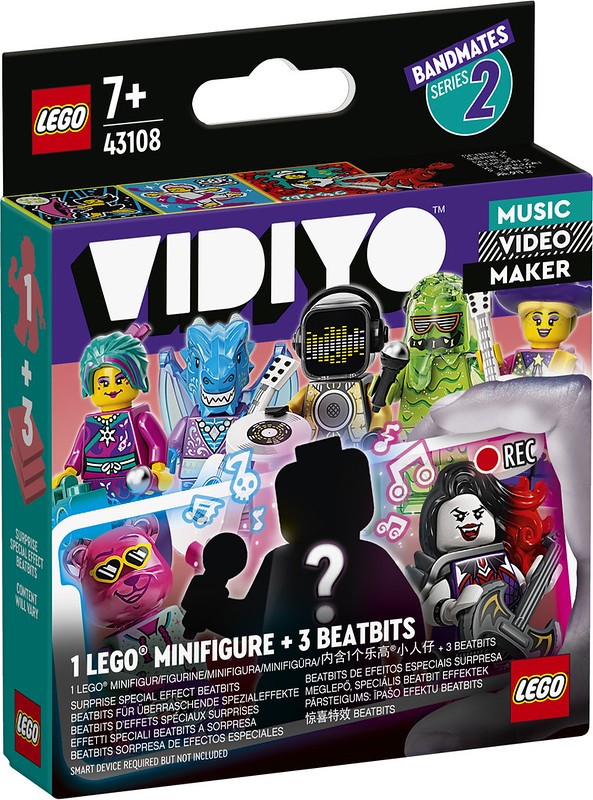 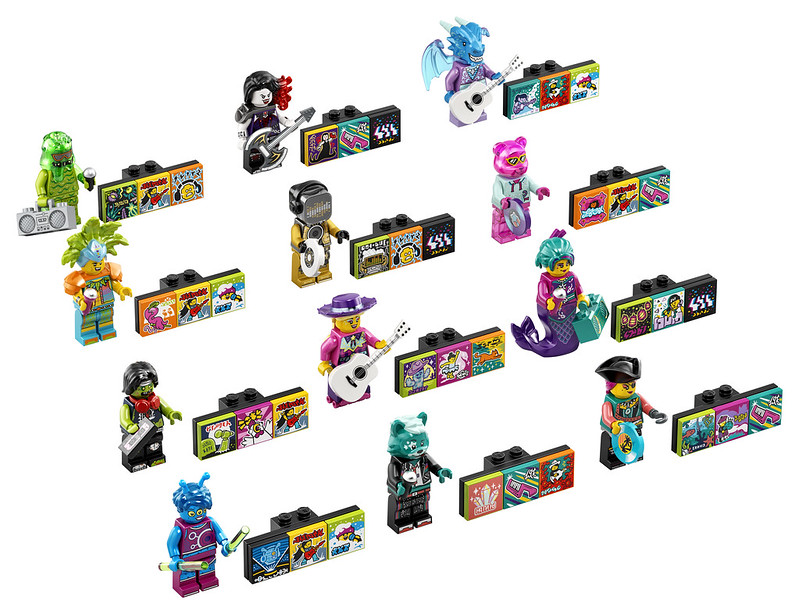 Includes a dragon singer minifigure, 14 random BeatBits and 2 special BeatBits (Monster Organ sound and burning Lava effects). The BeatBox is portable for fun on the move and can be decorated using the LEGO pieces. Styles include a castle, dragon head and microphone – or any design of own choice! Special effect BeatBits like the rock opera sound effect and exciting fire visuals come alive once scaneed in the app, just like in a real heavy metal concert. Measures over 8 cm high, 7 cm long and 11 cm wide. 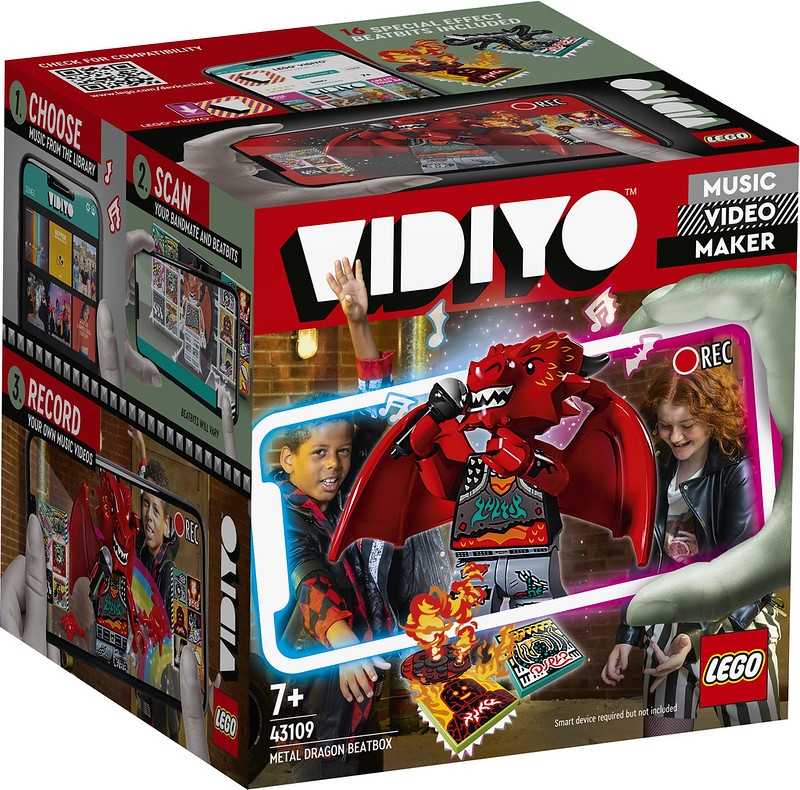 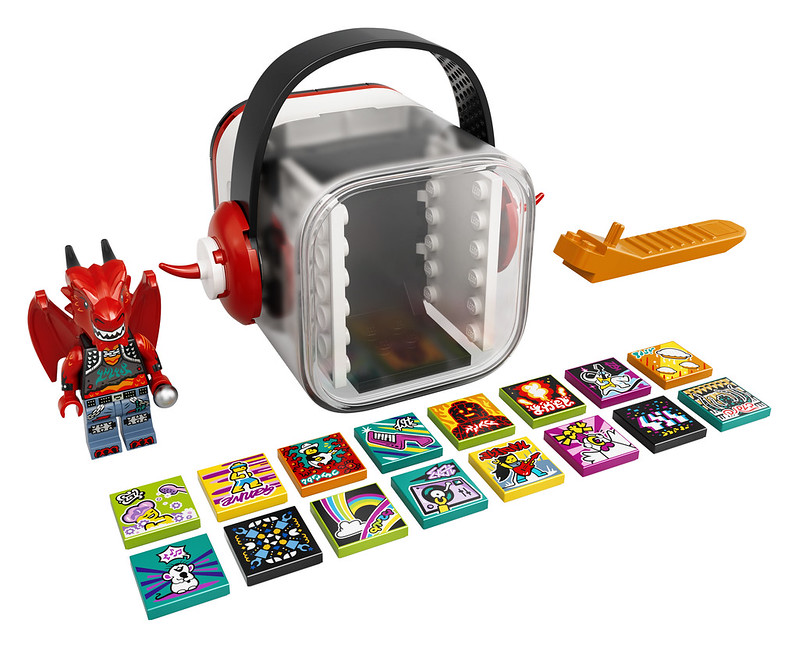 Includes a fairy minifigure, 14 random BeatBits and 2 special BeatBits (a magic spell Beatbit effect that transforms bandmates into random objects and magic forest scene BeatBit). The BeatBox is portable for fun on the move and can be decorated using the LEGO pieces. Styles include fairy wings, a flower, or violin design – or any design of own choice! Special effect BeatBits include a magic spell which changes items into random objects and a fantasy world effect to make a magic forest appear in the scene. Measures over 8 cm high, 7 cm long and 9 cm wide. 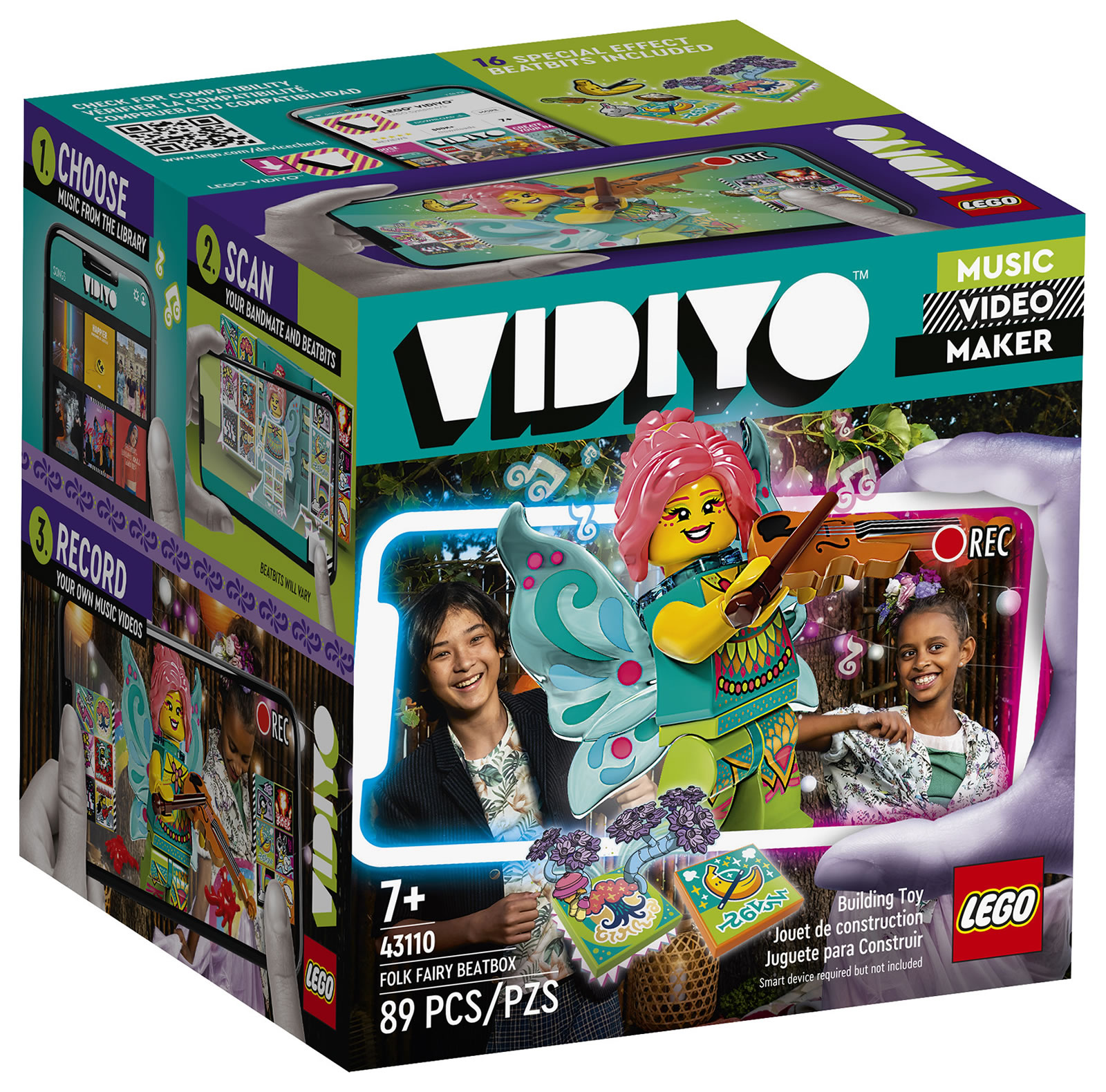 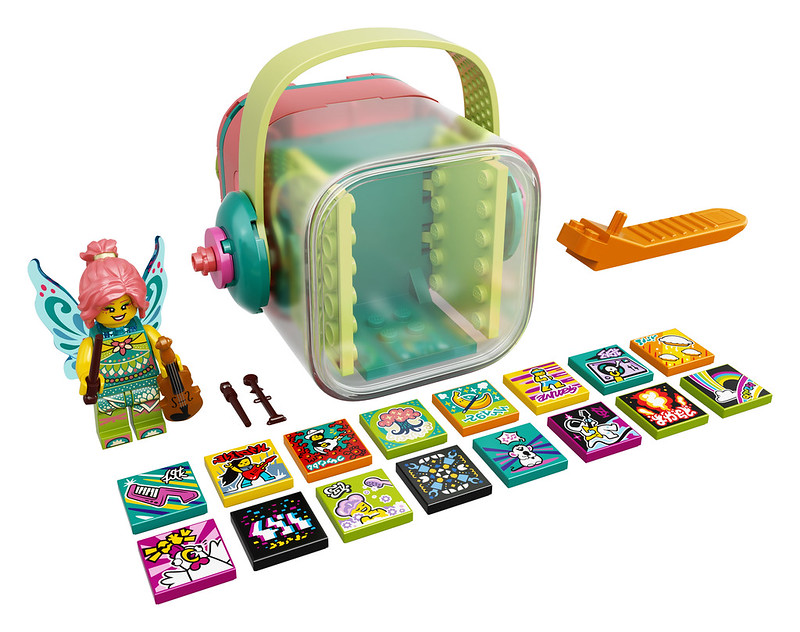 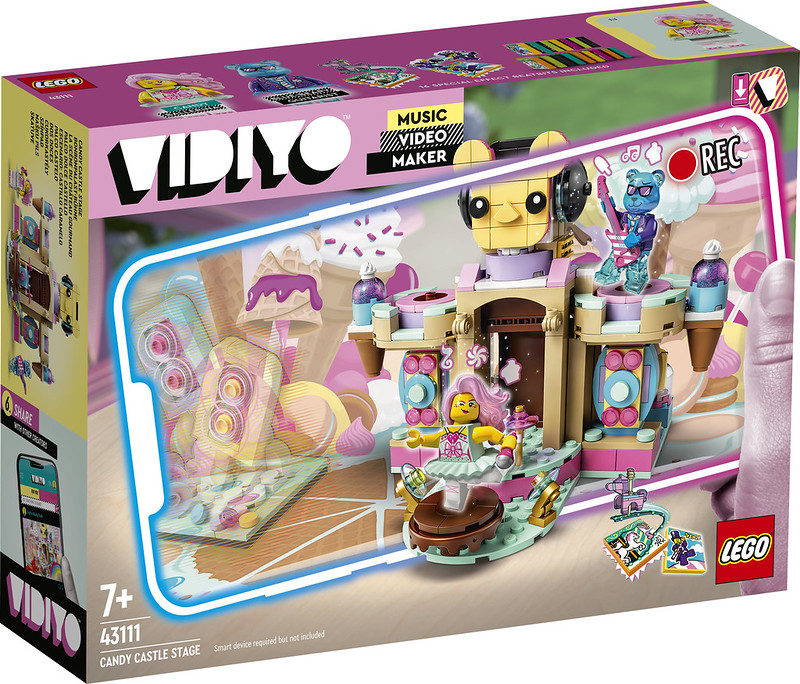 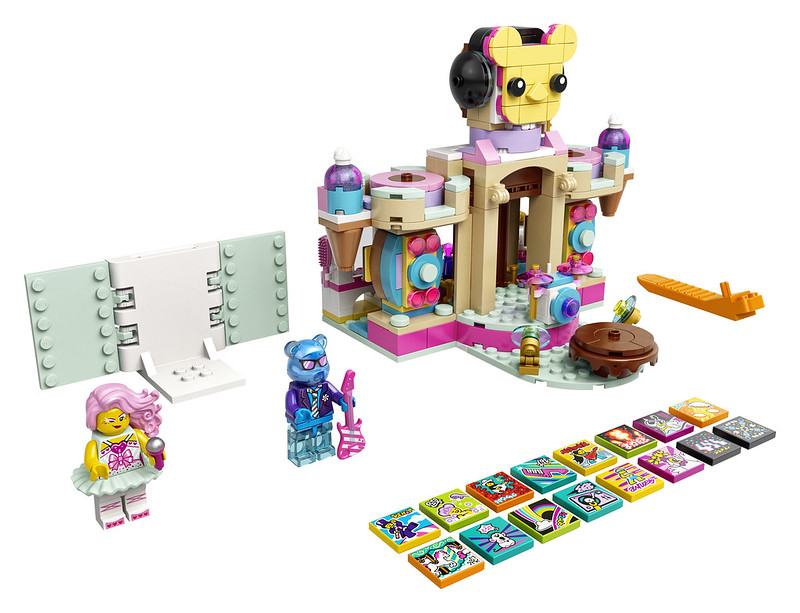 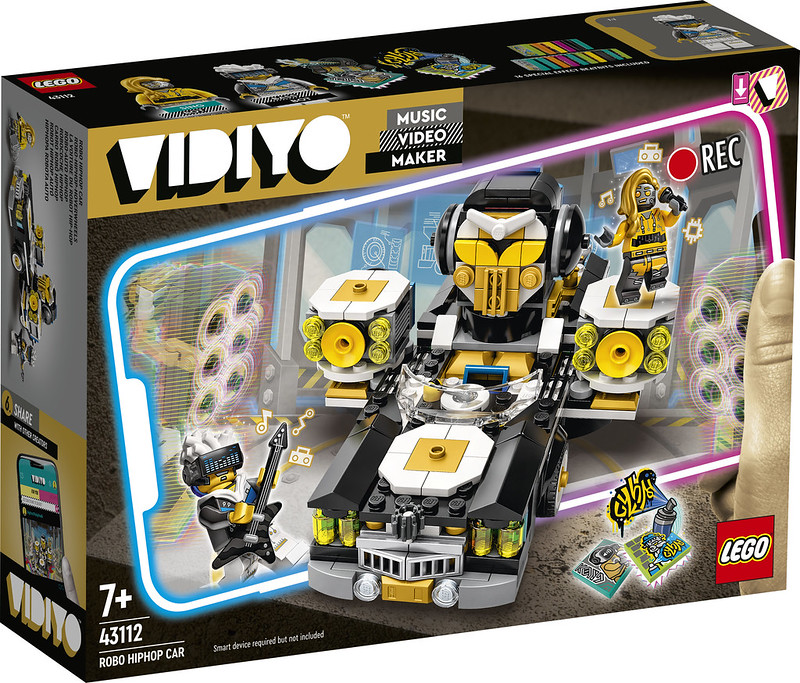 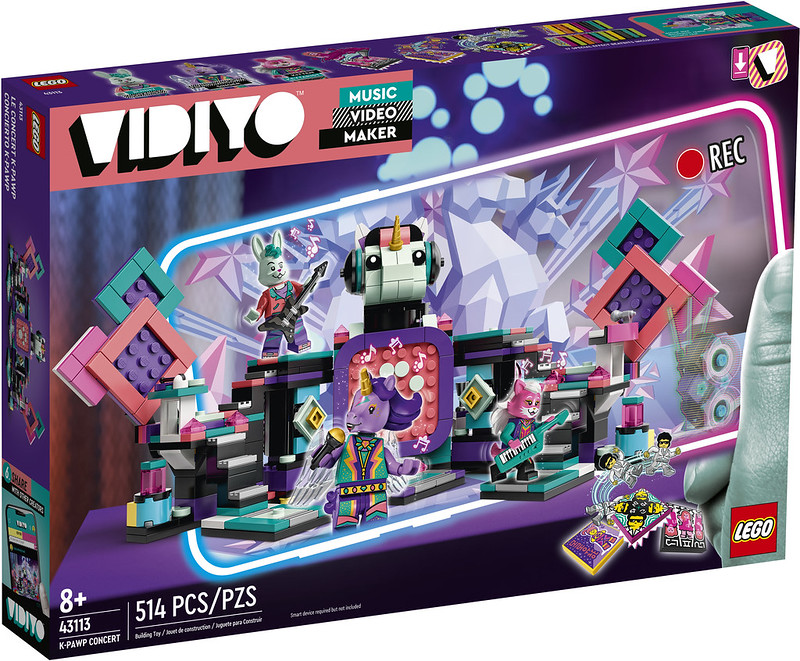 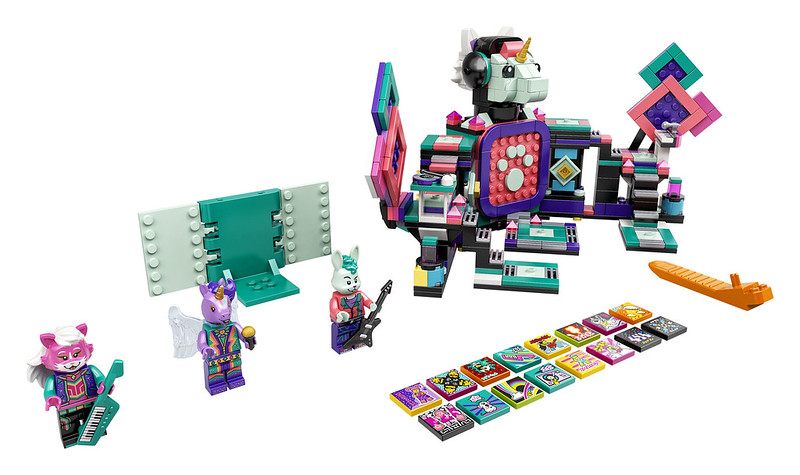 3 minifigures Squid Drummer, Shark Guitarist and Mermaid Violinist with musical accessories, 14 random BeatBits and 3 special BeatBits (surf on a shark, cannon salute and pirate dancing). Make changes to the real-life LEGO model to change the scenery in your VIDIYO music videos – like swapping the skull head for a shark head or changing the treasure chest speakers to cannons. Measures over 19 cm high, 24 cm long and 18 cm wide. 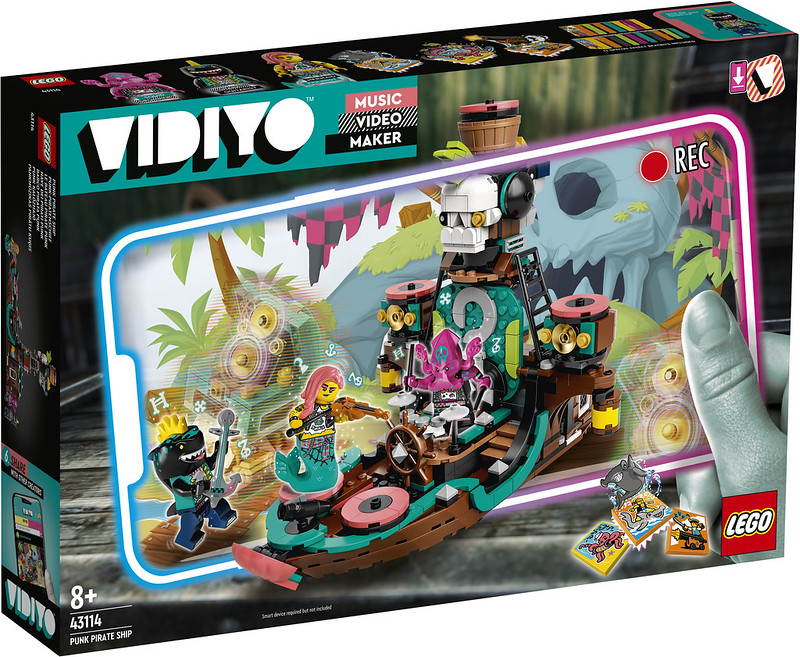 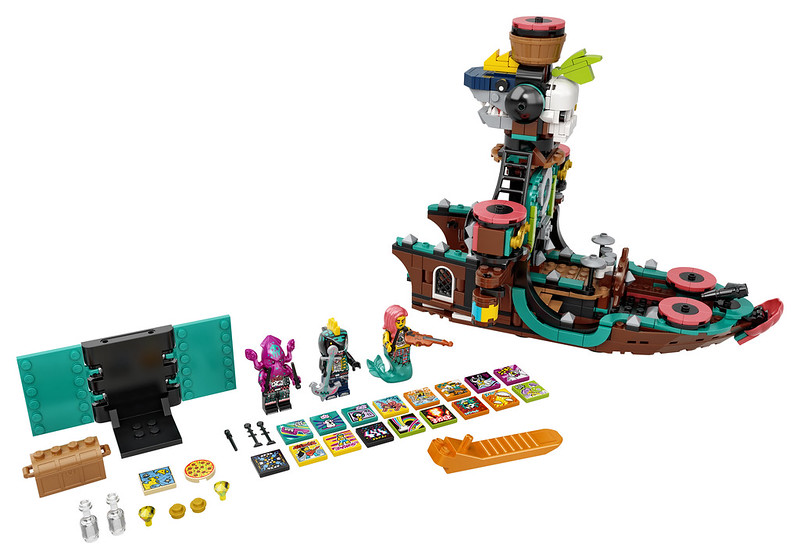 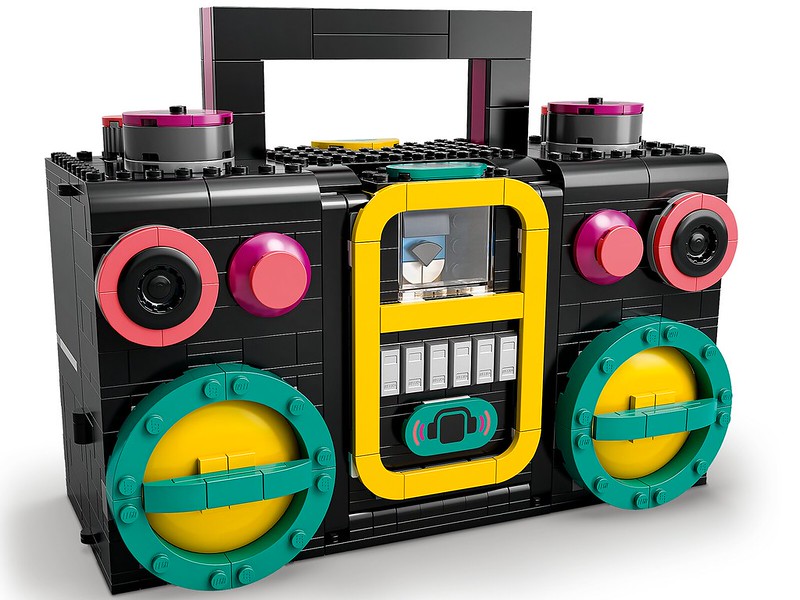