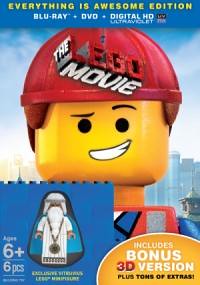 There is a image on NeoGAF of what could be the box art for The LEGO Movie “Everything is Awesome Edition” Blu-Ray. The box shows Emmet on the cover as well as a image of what the exclusive LEGO Vitruvius minifigure looks like. This version of the Blu-Ray also includes DVD, Digital HD Ultraviolet, as well as the bonus 3D version and has tons of extras. This image seems to go along with the information we got yesterday of which version the Blu-Ray the Vitruvius minifig will be in.

could be the retailer that will be stocking the “Everything is Awesome Edition.” The page lists the Blu-Ray as well as the LEGO Minifigure. The retail price is $45.99 but they have a pre-order for $41.38. Will the price dissuade you from picking up the movie with the minifig?