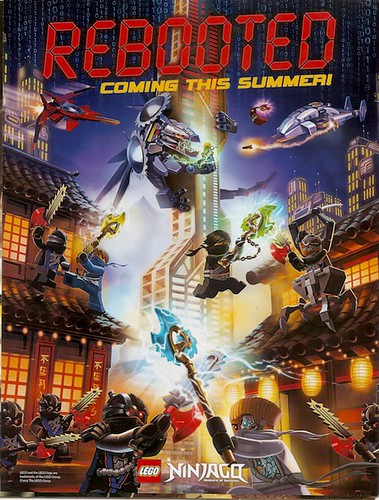 Delta 38 over on Eurobricks has posted an image of a new LEGO Ninjago Rebooted poster which came from the Australian LEGO Club Magazine. It also states “Coming This Summer” which probably means that the animated cartoon TV series will be back sometime in December since it will be summer then in Australia. (Thanks to J-Lu in comments for clarification.) The image features all of the Ninjas fighting the Nindroids and also gives us a clue about one of the upcoming sets. In the middle of the image, you can see what appears to be the Nindroid MechDragon (70725). To the left of it is the Kai Fighter (70721) and to the right of the MechDragon is a mysterious aircraft. My guess is that is could be the Hover Hunter (70720) but there’s speculation that it is the NinjaCopter (70724). I’m gonna stick with the Hover Hunter since it doesn’t look like a Copter at all. Overall, I really dig the artwork and am totally looking forward to the Nindroid MechDragon set.