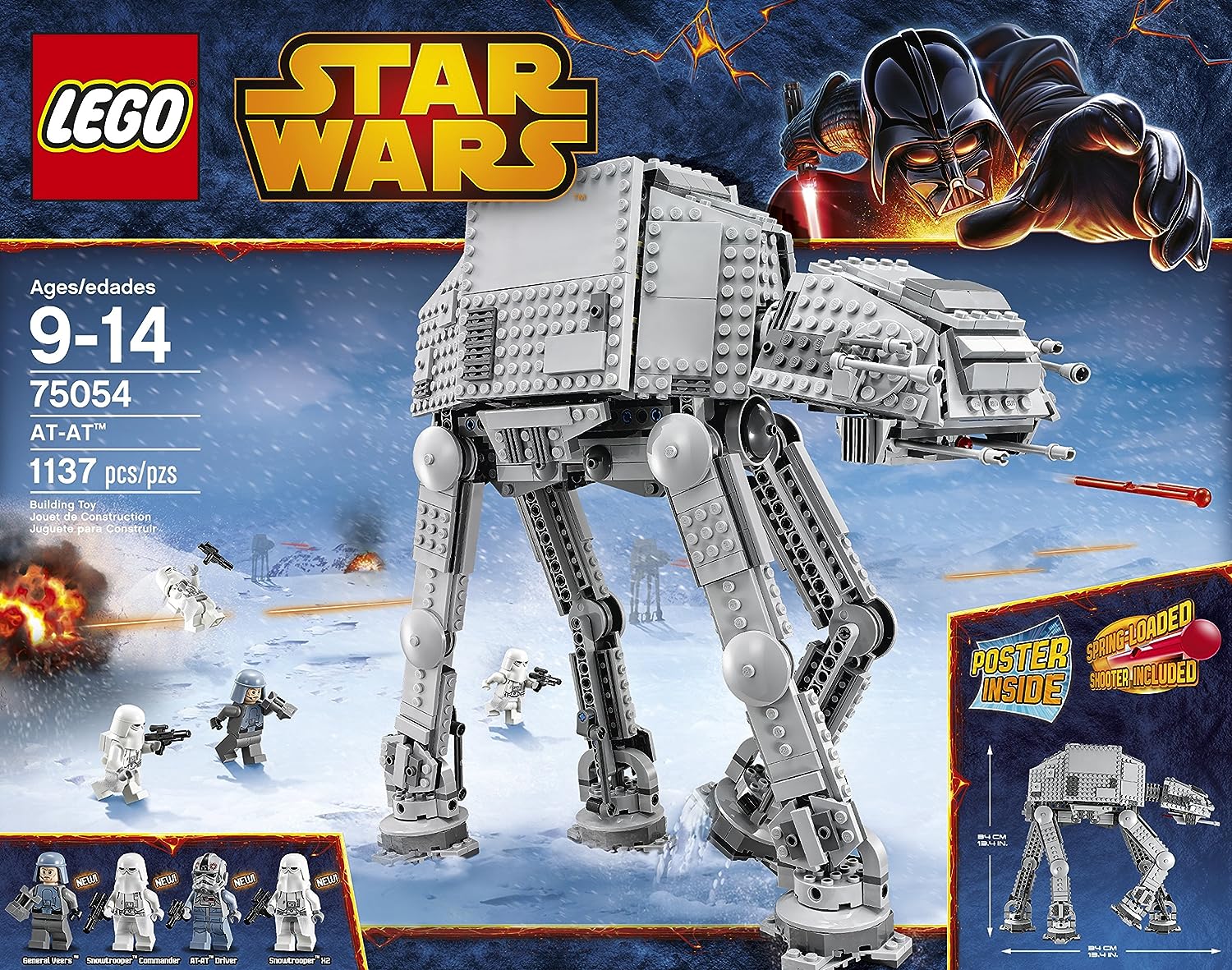 for $89.91 which is more than $20 (18%) off the retail price of $109.99. The set is also eligible for free shipping with Amazon Prime. Christmas is coming real soon so this is a great set to get early at a very nice price as you probably won’t it this low again for a while when the deal expires.

Continuing along with the reveal of official set images today, here we have the summer wave of the LEGO Star Wars sets courtesy of Amazon.

Lead Rogue Squadron with Luke Skywalker in the streamlined Snowspeeder! Place him and gunner Dak Ralter in the dual cockpit with their weapons and attack with the spring-loaded shooters hidden under each wing. Target the Imperial Snowtrooper with the rear stud blaster or convert it to fire the harpoon hook and take down the 75054 AT-AT (sold separately). Then take the action to the ground with the tripod gun. Recreate the classic Battle of Hoth from Star Wars: Episode V The Empire Strikes Back! Includes 3 minifigures with assorted weapons: Luke Skywalker, Dak Ralter and a Snowtrooper.

Play out epic scenes from Star Wars: Episode VI Return of the Jedi and other thrilling space battles with the B-wing! Rotate the cockpit so the pilot always has a clear view ahead. Rev up the 4 huge engines to power through the galaxy and fire the spring-loaded shooters to repel Imperial attacks. Adjust the wings from the iconic cross shape for flight or landing mode. Includes 3 minifigures with assorted weapons and an accessory: Ten Numb, Gray Squadron Pilot and General Airen Cracken.

Protect the vital Holocrons from the dark side with Jek-14 and his streamlined Jedi Scout Fighter. Lift the rear hatch to stash the containers of Holocrons and lightsabers. Place clone trooper Jek-14 and his co-pilot in the dual cockpit that opens two

There are some new details of the new Summer 2014 LEGO Star Wars sets courtesy of LEGO retailer Kiddiwinks. There are no images but they do have a release month of June.

Fly The Phantom into battle against the evil Empire!

Zoom into battle with Luke Skywalker™ in the Snowspeeder™ with dual cockpit, stud blasters, harpoon, 2 spring-loaded shooters and more.

Battle the Imperial Forces with the super-sleek Snowspeeder™!

Lead Rogue Squadron with Luke Skywalker™ in the streamlined Snowspeeder™! Place him and gunner Dak Ralter™ in the dual cockpit with their weapons and attack with the spring-loaded shooters hidden under each wing. Target the Imperial Snowtrooper™ with the Battle the Imperial Forces with the super-sleek Snowspeeder™!

Play out epic scenes from Star Wars: Episode VI Return of the Jedi and other thrilling space battles with the B-wing™! Rotate the cockpit so

It was only yesterday that we reported on some of the new LEGO Star Wars 2014 Summer sets. Members over on Eurobricks have already found some preliminary images of a couple of the sets from a retailer catalog. The images originated from a user on Instagram below are some details of what I saw.

Contains 4 minifigures: Jek-14, unnamed Ithorian Jedi Master, RA-7 Protocal Droid, unnamed Astromech Droid. The set could be another one based on The Yoda Chronicles.

Looks to have 7 minifigures: Luke Skywalker, Han Solo, Greedo, Sandtrooper, and 3 Bith musicians of the Cantina Band who have Squidward’s head. Hopefully the heads are only temporary. Set also includes the Dewback who we saw in the 2013 Advent Calendar bonus video. The image also shows part of Luke’s Landspeeder in the shot but not sure if it’s included in the set. Considering the 8092 version only had 163 pieces and the Cantina itself is slightly larger than the 4501 version, LEGO could combine the two sets since the new set has 615 pieces. Again, these are preliminary shots so anything can change.

Contains 6 minifigures: Darth Vader, Imperial Officer, Imperial Crew, Stormtroopers x2, some other guy I can’t make out. Looks similar to previous Imperial Destroyers but with some slight changes. It looks like the … Continue