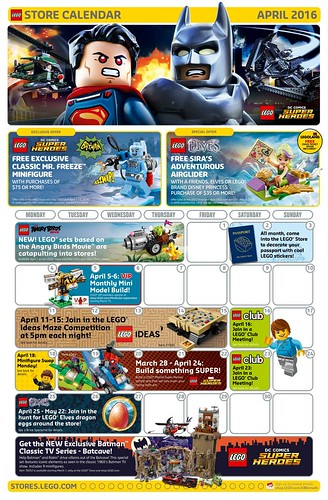 The April 2016 LEGO Store Calendar is now available and there are some cool things happening for the month.

, your decision now is to wait for Double VIP points in March or for the Mr. Freeze polybag in April.

April 25-May 8: You can get a FREE LEGO Elves Sira’s Adventurous Airglider (30375) polybag with purchases of $35 or more on Friends, Elves, and Disney Princess sets.

April 5-6: The VIP Monthly Mini Build will be a Bumblebee.

April 11-15: There will be a LEGO Maze Competition at 5pm using the LEGO Ideas Maze (21305). Here we can also get a good look at the set which should be announced very shortly, probably at LEGO World Copenhagen.

April 18: LEGO Brand Stores will have a Minifigure Swap day.

New sets that will be available on April 1 include the LEGO Angry Birds, Juniors, Super Herores, Elves, and Minecraft. There will be bonus VIP points on purchasing the LEGO Elves The Starlight Inn (41174) and the Fire Dragon’s Lava Cave (41175). 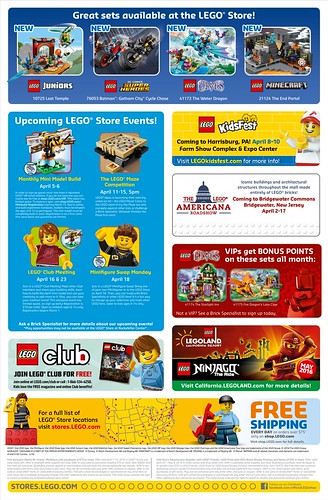