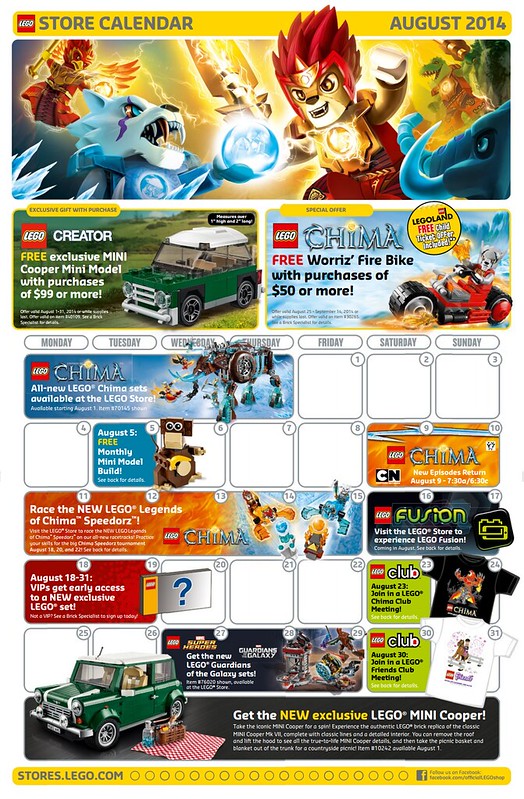 For the freebies for August, the LEGO Creator MINI Cooper MK VII Polybag (40109) will be available with purchases of $99 or more and the offer lasts for the whole month or while supplies last.

From August 25th – September 14th, you can get a free LEGO Legends of Chima Worriz’ Fire Bike Polybag (30265) with purchases of $50 or more. This offer overlaps with the MINI Cooper (40109) polybag promotion so if the Cooper polybags are still available by then, you can possibly get both polybags with a single purchase.

In other related Chima news, the Summer 2014 wave sets will be available starting in the beginning of the month. There are reports that the Ultrabuilds sets will not be available in North America so that is a disappointment.

From August 4th – September 15th, visit your store to race the new Speedorz sets on a new racetrack. Get your practicing in before the Speedorz tournament later on in the month (below).

On August 9th, new episodes of LEGO Legends of Chima will be on Cartoon Network at 7:30a/6:30c.

On August 18th, 20th, and 22nd at 5pm, the LEGO Stores will be holding a LEGO Chima Speedorz Tournament and all participants will receive an official LEGO Chima Certificate and tournament winners will get a LEGO Legends of Chima Speedor. There’s not mentioning of which Speedor you … Continue