There’s some interesting details coming out of the Twitterverse today. Goggleblox noticed something new on the back of the new LEGO Club Magazine. It must be different from the US version because my copy does not show the image. The image shows what appears to be a person in a Unicorn costume. Could this be one of the characters in the Series 13 LEGO Collectible Minifigures (71008)?

As you may have known, costumed characters have always been a staple in the the LEGO Collectible Minifigures line and this looks like proof that another one will be in the upcoming series. The Unicorn that is pictured shows a female in a costume with some star printing on the torso and some hoof printing on the feet. The head is a horse head with a horn piece attached to the top. She is also shown holding some 1×1 round plates which could represent some snow. I’m not sure if they will be included with the minifigure or not.

What do you guys think of having an Unicorn as one of the Series 13 LEGO Collectible Minifigures (71008)?

Update: Andrew on our 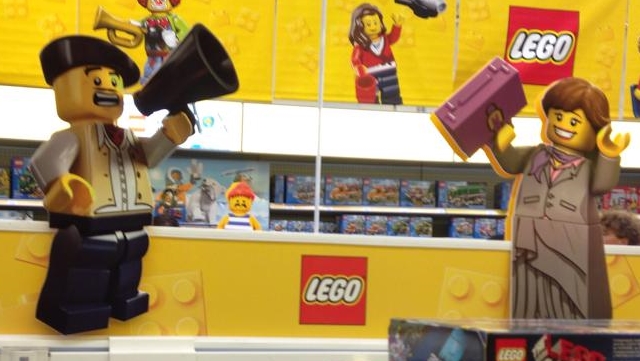 When you make a purchase or, sometimes, carry out some other action as direct result of clicking on a link at The Brick Fan, we will receive a small

LEGO The Simpsons Series 13 Collectible Minifigures Confirmed For May 2014

As we reported last month, there was a rumor that the Series 13 of the LEGO Collectible Minifigures line could be based on The Simpsons characters. Today, Nerdly.co.uk has confirmed that rumor to be true. In May 2014, Series 13 of the Collectible Minifigures line will be based on 16 Simpsons characters including Homer, Marge, Bart, Lisa, Apu, Chief Wiggum, Moe, Itchy and Scratchy, and a few more of the animated TV show’s characters will be released. Nerdly also reports that the only LEGO system set to be released in the first quarter of 2014 will be the Simpsons House on 742 Evergreen Terrace which will be available direct-to-consumers at LEGO brand stores and on [email protected] in April 2014. Finally in May 2014, there will be a special LEGO Simpsons TV episode, very similar to LEGO Star Wars: The Padawan Menace and The Empire Strikes Out. The Simpsons’ director David Silverman has also confirmed the news via Twitter:

Okay, NOW I can tweet about the upcoming Simpsons Lego Show! http://t.co/mDiVO04tC1

A couple of weeks ago, we reported that The Simpsons were indeed confirmed for release sometime in the future. Today, All About Bricks is reporting that the Series 13 of the LEGO Collectible Minifigures line will be based on The Simpsons and future Collectible Minifigures releases will be licensed characters. They have also noted that the there will be no sets but just minifigures to commemorate the 25th anniversary of the show. This news is a total opposite of the rumored sets that was supposedly being released this winter.

Let’s think about this for a minute here. If this is true, it will be a dramatic change from LEGO especially for a new theme. I’m not sure if it will be profitable with only minifigures because people most likely will not be looking for multiples of the same character. We don’t need an army of Bart minifigures, do we? It was already announced that Series 12 will be based on The LEGO Movie but that is to coincide with the huge movie event. For the company to create just a line of minifigures for a new theme is unheard of, aside from the Collectible Minifigure series.

Although these are just rumors, All About Bricks have been correct on many other things so we will see if this whole Simpsons thing is true. Stay tuned for more Simpsons news as they come.

Update: The rumors are now confirmed. Read more about it here.

When you make a purchase or, sometimes, carry out some