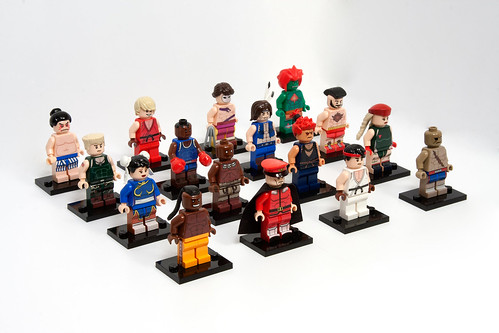 A couple of months ago, Julian Fong, aka levork, posted images of his custom LEGO Street Fighter minifigures on his Flickr account as well on LEGO CUUSOO. Unfortunately, LEGO quickly rejected the project due to the content not being appropriate for children, but now you can own these same minifigures as he is selling them. Julian has put the minifigures on eBay and all the proceeds will be going to the Child’s Play Charity. If you’ve wanted these Street Fighter minifigs, bid on them to help a great charity, which is a win-win situation. There is about 4 days 12 hours left on the listing as of this posting so please help out Julian and Child’s Play. Below is a brief description of the listing:

For sale is a full set of custom Street Fighter 2 Lego minifigs, entirely created by me. These are non-official, customized minifigs representing the entire cast of Capcom’s video game Super Street Fighter 2. That’s a grand total of seventeen minifigs: Ryu, Ken, Chun Li, Akuma, M. Bison, E. Honda, T. Hawk, Fei Long, Dee Jay, Guile, Blanka, Zangief, Vega, Balrog, Sagat, Dhalsim, and Cammy. Water-slide decals were designed and printed by me and applied to new Lego parts, then sealed with polyurethane for a durable finish. Custom hair elements were fashioned either from a combination of other Lego parts, and/or incorporate epoxy sculpts or paper elements. These figures are meant for display or very light play: the decals are fairly durable, but some of the epoxy sculpts are fragile

A couple of days ago, there were some Street Fighter 2 minifigures posted by Julian Fong, aka levork, that showed up on Kotaku. The 16 minfigure project was a year and a half in the making for Julian. He submitted his project to LEGO CUUSOO to see if it could get 10000 supporters. Unfortunately, the project did not even get off the launching pad. Back in March, LEGO CUUSOO started refining projects that are submitted which means LEGO weeds out projects that are deemed inappropriate for children.

Your project refers to a brand or licensed property that contains content or themes that do not fit the LEGO Group’s standards for appropriate content. For details, please see the Acceptable Project Content section of the Project Guidelines and House Rules (lego.cuusoo.com/guidelines).
LEGO CUUSOO will not accept a project submission based on this brand or licensed property. Decisions about how a property fits our standards are made at the sole discretion of the LEGO Group.

Remember that LEGO is a toy company, so we’re careful to only produce products we deem appropriate for children. Projects related to the below topics are not allowed. We will decide how a project fits these standards at our discretion. 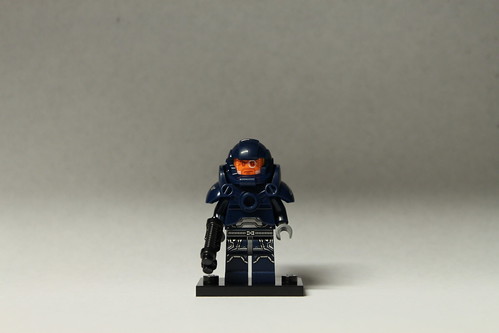 LEGO® Minifigures are the inhabitants of an unimaginable number of spectacular creations put together by both kids and grown-ups over the past several decades. Whether it is a knight in shining armor, a brave firefighter or just an oddball in a gorilla suit, these figures breath life into elaborately constructed cities, castles and even space stations around the world. The LEGO