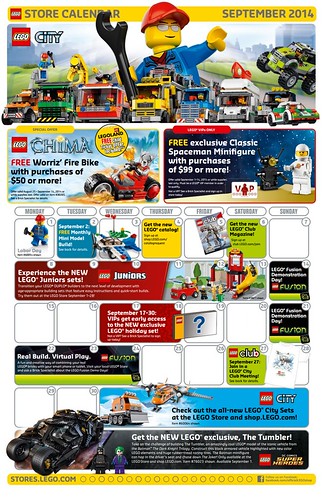 Today is the start of August and that means that the September 2014 LEGO Store Calendar is now available. This also means that there are some new promos that will be going on at the LEGO Stores and on [email protected] The biggest thing that will be happening is the FREE exclusive Classic Spaceman Minifigure for VIP members with purchases of $99 or more from September 1-14. We first revealed this little set back in June and was hoping that it would show up in the States later this year.

The other promo is the continuation of the FREE LEGO Legends of Chima Worriz’ Fire Bike (30265) with purchases of $50 or more until September 14th.

The FREE Monly Mini Model is a small Racing Plane.

will be available for the general public on September 1st while VIP members get it starting August 18th.

From September 17-30, LEGO VIP members again get early access to a new exclusive LEGO holiday set. This set will probably be the 2014 LEGO Winter Village Santa’s Workshop (10245). The set should be revealed very soon, hopefully at BrickFair VA this weekend.

On September 14 & 21, there will be a LEGO Fusion Demonstration Day at the stores.

FInally on September 27th, the LEGO Club Meeting will be City-themed and the t-shirt will feature a polar bear from the Arctic sets.

Overall, September is an okay month with the big promo for the Classic Spaceman Minifigure set for VIPs. It looks like I’ll … Continue