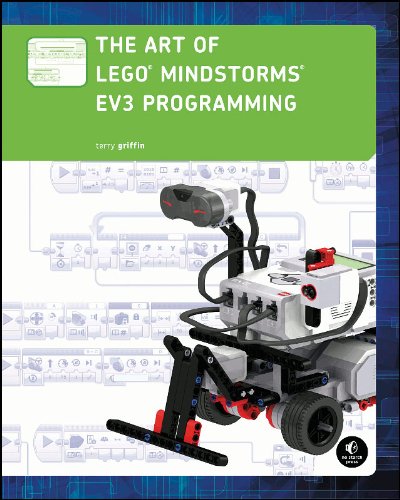 Earlier today, No Starch Press sent us a press release for The Art of LEGO MINDSTORMS EV3 Programming. You can also pre-order the book on Amazon

. Check out the press release below:

San Francisco, CA, August 26, 2014—The LEGO MINDSTORMS EV3 system makes it easy for anyone to build and control robots. LEGO’s block-based and colorful EV3 programming language is great for first-timers, but it has more powerful features than its user-friendly interface might suggest.

In the upcoming book The Art of LEGO® MINDSTORMS® EV3 Programming (No Starch Press, $34.95, 276 pp., Sept 2014, ISBN 9781593275686), software engineer Terry Griffin offers a beginner-friendly, in-depth guide to the EV3 language. An update to Griffin’s highly regarded Art of LEGO MINDSTORMS NXT-G Programming, this new book teaches readers the basic building blocks and then launches into more sophisticated programs. Readers begin by writing functions that control their robots’ movement, sensors, and sounds and then move on to programming more complex behaviors that allow their robots to follow lines, detect objects, and navigate mazes.
According to No Starch Press founder Bill Pollock, “The EV3 programming language is remarkably approachable but also surprisingly deep. Griffin’s new book will show any serious EV3 programmer how to unlock the real power of EV3. Competitive MINDSTORMERs will love this book.”

In The Art of LEGO MINDSTORMS EV3 Programming, readers learn how to:

Program robots to navigate through a maze by following its walls

Control robots with dials and sensors

Create devices like a sound generator and a sketchpad

About the Author
Terry Griffin has been a software engineer for over 20 years and has spent most of that time creating software to control various types of machines. He works for Carl Zeiss SMT on the ORION Helium Ion Microscope, programming the user interface and high-level control software.
View Terry Griffin’s full profile page.