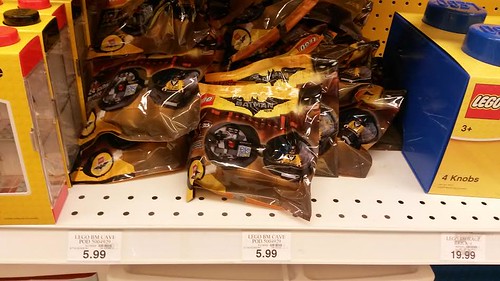 It finally looks like the US will be getting The LEGO Batman Movie Batman Battle Pod (5004929) in a wider release. A reader has sent in an image of the polybag set out in a New Jersey Toys R Us. We’re still not sure of the official release date of it at TRU as they had to key it in but it rang up for $5.99 each.

If you remember from earlier this week, LEGOLAND California also has a promotion going for the Batman Battle Pod so it appears that LEGO will be finally releasing it here in the US. The item number 740399 and the SKU is 673419269292.

There’s still no word on whether TRU will be the only retailer having it available or if [email protected] or other outlets will have them as well. Be on the lookout at your local Toys R Us to see if they have it at your store. Thanks to Todd for emailing this in.

Update: I’ve been told that it will officially be available at TRU starting on Sunday. We’ll see what sort of promo it goes with when the weekly ad comes out in a few days. Thanks to Peter for this info.