Earlier this morning, the much-anticipated teaser trailer for The LEGO Batman Movie was released and if you didn’t watch it a few times or closely enough, there were plenty of Easter eggs that you may have missed.

Fortunately, some hardcore LEGO fans like Just2Good, have picked apart the teaser and has pointed out some cool stuff like Batman’s suit collection where there was plenty to look at like the Pirate/Buccaneer Batman which we’ll be getting in the LEGO DC Comics Super Heroes Character Encyclopedia, Batman Beyond, and Knightmare Batman from Batman v Superman: Dawn of Justice.

Another thing that was pointed out was the villains in the movie like Scarecrow, a Bigfig Bane, Killer Croc, Catwoman, and Captain Boomerang. Check out J2G’s video below to see all the Easter eggs in The LEGO Batman Movie. 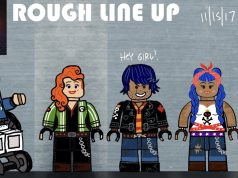