Amazon UK has revealed two new LEGO Overwatch sets that will be coming out later this year and I’m super hyped about them. The first set is called Wrecking Ball (75976) and it features Hammond along with his mech in his default skin.

The other set is called Junkrat & Roadhog (75977) and it features a Junkrat minifigure and a Roadhog bigfig that’s a brand new mold along with their motorcycle. This set is an interesting choice since the bike isn’t actually useable in the game but just as part of the Junkertown map. 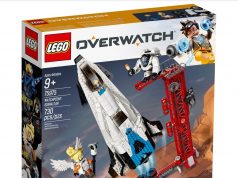