Walmart has revealed two more LEGO Jurassic World: Fallen Kingdom sets including one for the 25th anniversary of Jurassic Park. For the JW:FK set, it’s called the Dilophosaurus Outpost Attack (75931) and it confirms that the famous Dilophosaurus will be making a return to the movie.

As for the original Jurassic Park set, it’s called the Jurassic Park Velociraptor Chase (75932). This set shows the scene from Jurassic Park where Alan, Ellie, Lex, and Tim are in the control room with the velociraptor breaking in. If you look closely at the images, there are lots of easter eggs thrown in like the Dennis Nedry magic word screen and the cold storage room with the embryos.

Brace the hunters for a fierce Dilophosaurus Outpost Attack in this fun play set inspired by Jurassic World. Step down from the lookout tower and crane, featuring exploding gate and wall functions, crate and baby Dilophosaurus, and use the tranquilizer gun to stop the Dilophosaurus breaking through the fences. This dinosaur set includes 3 minifigures and 2 dinosaur figures.

-Features an outpost fence with a watchtower, movable crane and exploding gate and wall functions.

-Activate the exploding gate and wall functions to stage a dinosaur breakthrough!

-Accessory elements include 2 crates, a dinosaur egg and binoculars.

-This dinosaur set is suitable for ages 7-12.

Recreate a classic scene from the original Jurassic Park movie with this fun LEGO set that celebrates the 25th anniversary of the original blockbuster movie. Open the kitchen cabinet to hide Lex and Tim Murphy from the prowling Velociraptor, use the locking door function to keep the dinosaur out of the computer control room, then push it through the breakable window to continue the chase. This dinosaur set includes 4 minifigures and a Velociraptor figure.

-Features a computer control room with lab, and a kitchen area.

-Accessory elements include 8 dinosaur embryos, walkie-talkie, umbrella, wrench and a shaving foam can.

-Push the lever to activate the locking door!

-Hide the children in the kitchen cabinet to escape the Velociraptor.

-This dinosaur set is suitable for ages 7-12. 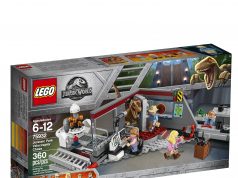