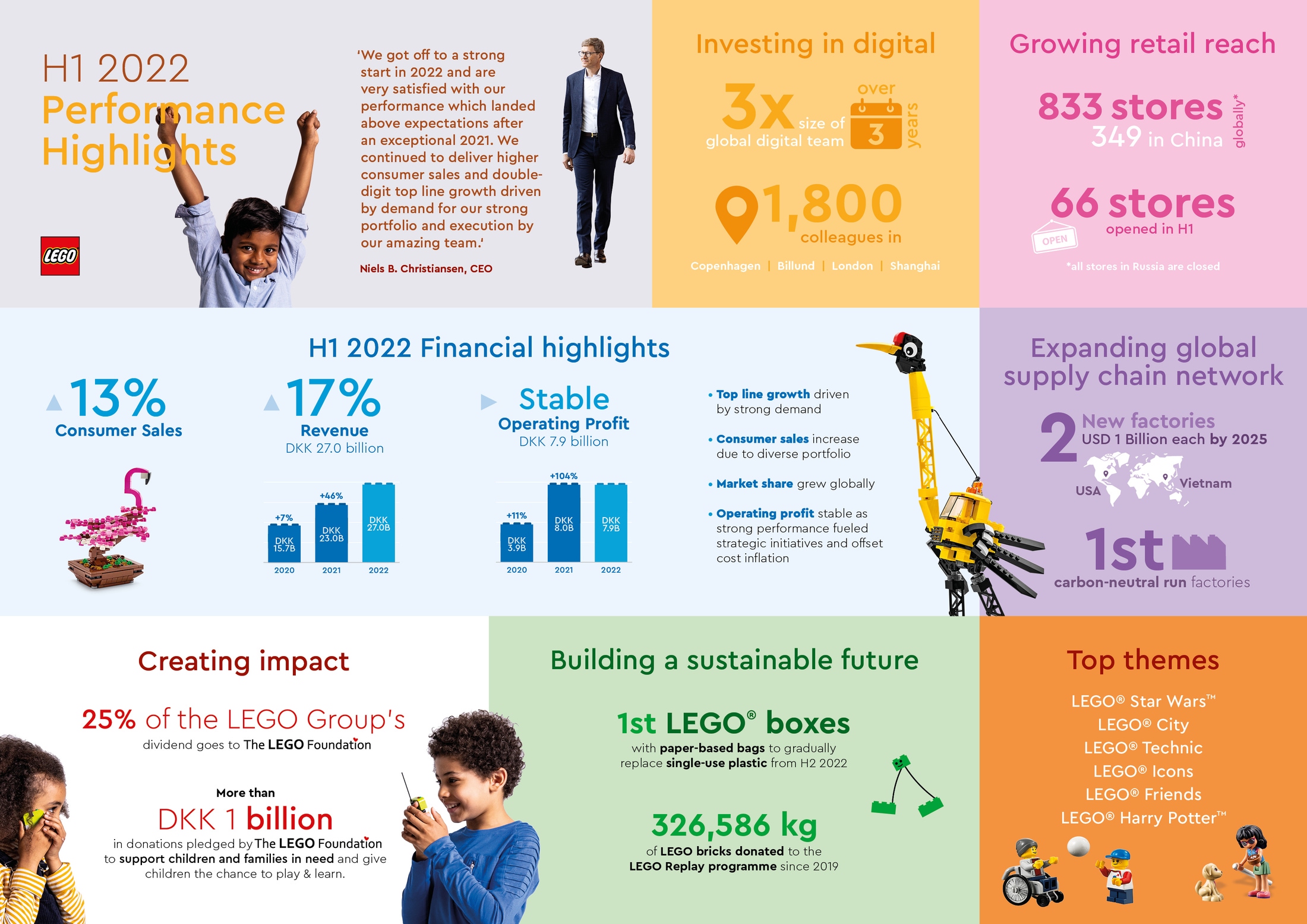 LEGO has released their financial results for the first half of 2022 and their performance was above expectations. Revenue was up 17% while sales increased by 13% however inflation costs on raw materials, energy, and fright has cut into profits. The best selling themes so far this year include LEGO Star Wars, LEGO Technic, LEGO Icons, LEGO City, LEGO Harry Potter, and LEGO Friends.

As the company celebrates its 90th anniversary, strong demand drives double-digit top line growth while it reinvests in the business to accelerate long-term growth initiatives during first half of 2022.

• The LEGO Foundation continues pledge to support families in need and children’s development through playful learning.

The LEGO Group CEO, Niels B. Christiansen said: “We got off to a strong start in 2022 and are very satisfied with our performance which landed above expectations after an exceptional 2021. Despite global uncertainties, we continued to deliver higher consumer sales and double-digit top line growth driven by demand for our strong portfolio and execution by our amazing team.

“Across the world, we celebrated our 90th anniversary and are grateful that after nearly a century LEGO® play remains relevant and continues to inspire families and children.”

In the first half of 2022, the LEGO Group focused on expanding manufacturing capacity and building healthier inventory levels while increasing productivity following an extended period of exceptional growth rates and maxed out capacity in 2021. Due to these accelerated investments, free cash flow was DKK 3.8 billion, compared to DKK 5.8 billion in the same period last year. Net profit stayed solid at DKK 6.2 billion matching the extraordinary result in the same period last year.

Christiansen said: “For the second half of 2022, we continue to see strong demand for our products. Longer-term we expect top line growth to normalise to more sustainable levels. We will also continue to reinvest in our business and accelerate initiatives such as product innovation, digitalisation, production capacity, our retail network and sustainability to maintain momentum and deliver sustainable growth in the long-term. These significant investments will position us well in the future to bring learning through play to more children around the world.”

Strong portfolio appeals to fans of all ages and interests

During the first six months of 2022, consumer sales grew in all market groups, with especially strong performances in the Americas, Western Europe and Asia Pacific. The growth was driven by the continued demand for the company’s extensive and diverse product portfolio. Top themes in the first half included LEGO® Star Wars™, LEGO® Technic, LEGO® Icons (formerly Creator Expert), LEGO® City, LEGO® Harry Potter™ and LEGO® Friends.

This year’s portfolio is the largest on record and caters for builders of all skill levels and ages. It includes LEGO products that reflect a wide range of interests and hobbies our builders are passionate about from art and design and cars to music, sport and space exploration.

In April, the LEGO Group announced a long-term partnership with Epic Games which will see the two companies join forces to create fun, safe digital experiences for kids in the metaverse and inspired by the endless possibility of the LEGO brick.

The company expanded its global store network in the first six months, opening 66 new LEGO stores, 46 of which were in China. This takes the number of stores globally to 833. The company also strengthened e-commerce capabilities across its own and its partners’ online platforms.

In June, the LEGO Group officially opened a digital office in Copenhagen while growing the global digital team nearly 40 percent in the first six months of 2022. Over a three-year period, it is committed to triple the size to 1,800 colleagues globally while strengthening e-commerce, upgrading digital infrastructure and driving an enterprise-wide digital transformation.

The LEGO Group made progress against its ambition to make its packaging from sustainably sourced materials by the end of 2025. In the second half of 2022, it will begin to roll out paper-based packaging in LEGO boxes in Europe.

In June, the company announced plans to open its second carbon-neutral run factory in Virginia, United States, in addition to the factory announced in Vietnam late last year. Both sites’ energy requirements will be matched by energy from onsite renewable sources.

Creating impact for children and families

The LEGO Foundation, which receives 25 percent of the LEGO Group’s dividends, pledged more than DKK 1 billion in donations in the first half of 2022 to support families in need and children’s development. Some of the programmes funded included a global competition aimed at giving children the best start in life; support for neurodivergent children; and support for children and families impacted by the war in Ukraine.

Christiansen said: “We are fortunate that our strong financial performance allows us to make a positive contribution to society and invest in the company’s future so we can bring learning through play to children everywhere.”