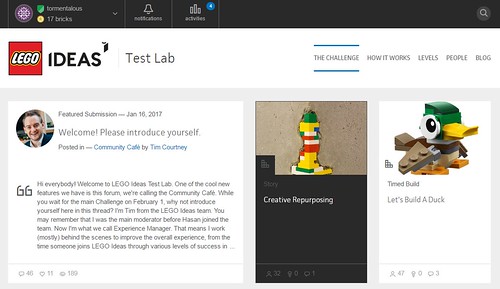 Hasan over on the LEGO Ideas blog, has announced that they have rolled out a new software platform called the LEGO Ideas Test Lab. From January through April, this new instance of the LEGO Ideas software allows LEGO to test out a new platform which includes some new stuff like contests called Challenges as well as a new reward system.

Participation on the LEGO Ideas Test Lab will earn you Bricks which gives your more privileges within the community. You can earn more Bricks by submitting entries as well as doing a variety of tasks in the community.

Starting February 1, there’s an exclusive Fourth Build Challenge where you design an alternate build for LEGO Creator 3-in-1 sets. There will be some prizes up for grabs as well as having your creation being featured in the LEGO Life Magazine.

LEGO has already sent out invitations to join the LEGO Ideas Test Lab to top contributors on LEGO Ideas and LEGO Rebrick but if you didn’t get one, you can also join by signing up in the link above. If you want to try it, sign up quickly as there is a limit of 7,500 participants.