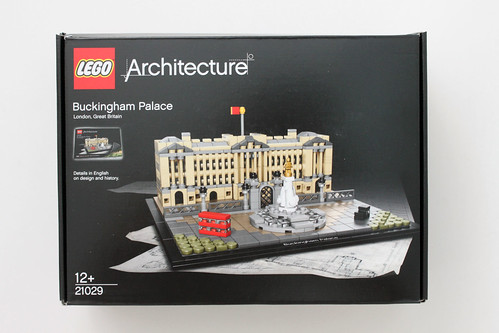 Following after my review of the LEGO Architecture United States Capitol Building (21030), I have the other summer 2016 release set with the Buckingham Palace (21029). Coming in at 780 pieces while retailing for $49.99, it has a $0.06/piece ratio but that may be a little misleading which I’ll get to a little later. The contents of the box include five un-numbered bags, three loose 8×16 plates, and the instruction booklet. 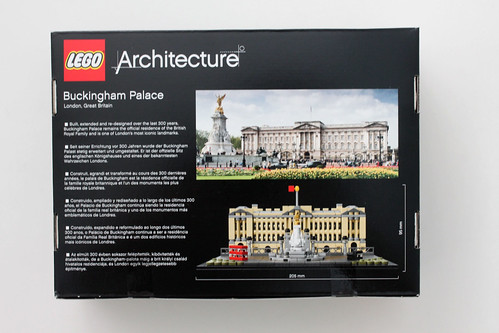 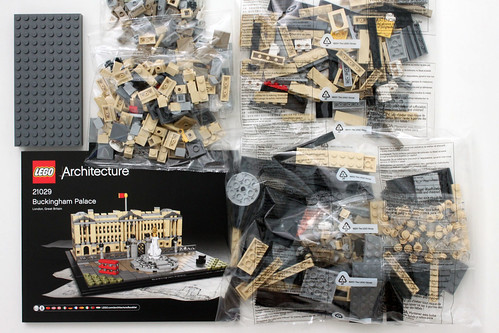 Like other LEGO Architecture instructions, the one for the Buckingham Palace gives you some background history of the famous building including the architects. Throughout various parts of the build, there are also fact snippets on the upper-right corner of the pages.

Because the bags are not numbered as I mentioned before, you’ll most likely have to dump all the bags out. Seasoned builders will probably have all the bags dumped out in to their respective piles since there are a lot of small pieces included with the set.

The build begins with the base which is typical of the LEGO Architecture sets. When completed, the base measures at 26×24 studs. The outer edge is complete with black tiles with the center front one having “Buckingham Palace” printed on it. Towards the back, you have a lot of dark tan jumper plates which is used for the Palace itself later on. In the front, you have some olive green 1×1 round tiles and 1×1 plates to represent the gardens that are in front of the Palace. 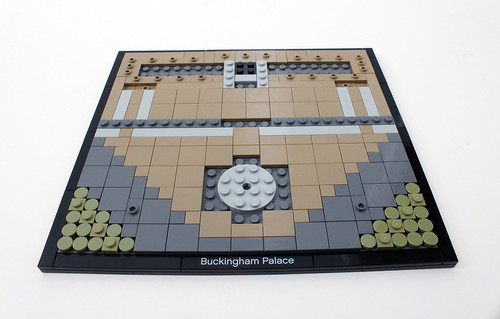 The next steps will begin the construction of the Palace itself. It starts will the back wall which has some nice detailing with the use of bricks and plates. On either side of the back wall, there are 1×1 headlight bricks with conjunction with 1×2 bricks with studs on the side and they’re covered up with 2×4 tiles to give it the smooth feel.

On the left and right walls, there’s some more 1×1 headlight bricks to represent some windows. On top of those window, there’s a build for the window section with it stacking 1×4 plates, 1×1 studs, and 1×1 clear plates which may get a little repetitive. The sections are turned 90 degrees and are attached sideways to give the SNOT look. All of the clear plates and studs comprise of a decent amount of parts so the number of overall pieces in set could be inflated because of this. 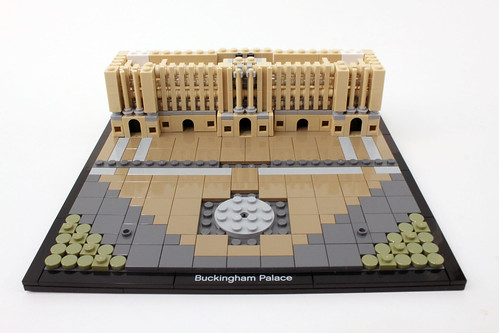 During this part of the build, the front of the Palace is also built in conjunction. It uses more of the headlight bricks as well as some 1x2x2 arch pieces for the doorways. There are also some 4L bars that on attached to clips to represent the columns of the building. 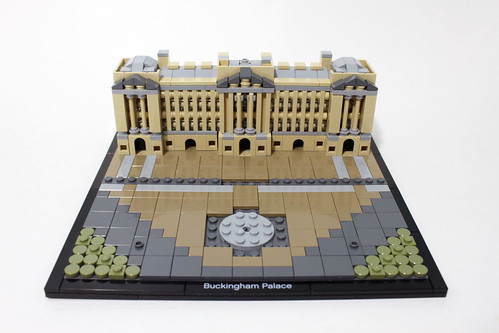 For the roof of the Palace, there are five separate sections that are built. Dark bluish gray cheese slopes are used to create the pediments above the columns in the center and on the sides while a variety of tan and light bluish gray parts are used to fill out the back. 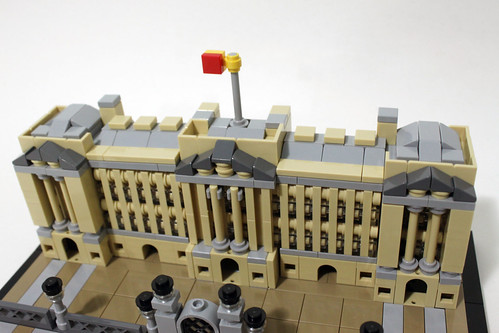 Finally we have the outer area of Buckingham Palace. Here we have some fencing and light posts in front of the building. Further out, there’s also the Victoria Memorial with a pearl gold minifigure statue to represent Victoria. This particular piece has only been seen in one other set. On either side of the memorial is a miniature red double-decker bus and a black taxi cab. The last thing to put on the set is the Royal Standard flag. 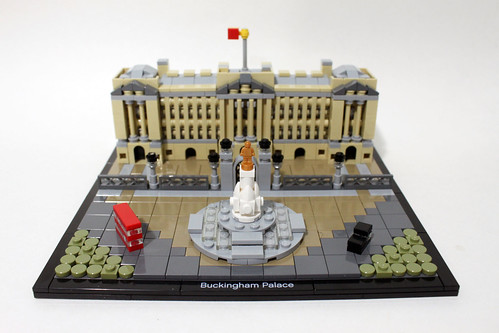 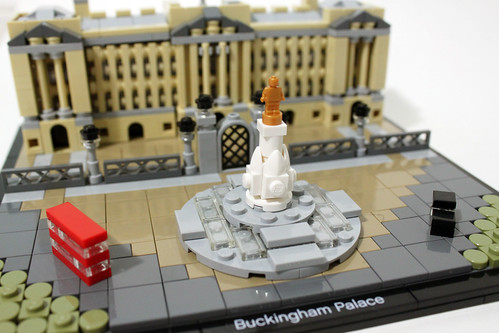 Overall, the LEGO Architecture Buckingham Palace (21029) is a pretty decent set. The build time was very long but it does incorporate a lot of the details of the Palace. One thing that separates this set from other Architecture sets is the other area. We normally don’t see these minor details but the fountain and miniature vehicles are a nice addition. 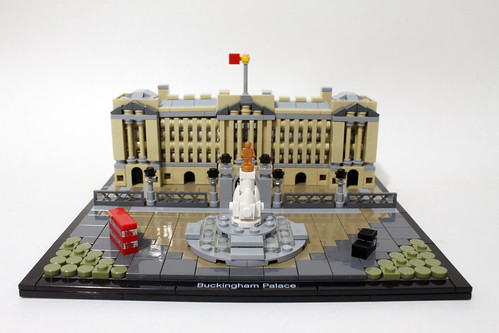