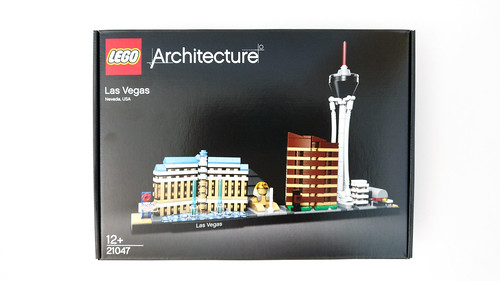 Earlier this year, it was revealed that there was going to be a LEGO Architecture Las Vegas (21047) set but as we know by now, it was delayed due to the tragedy late last year at one of the original hotels in the set. Fast forward eight months and LEGO decided to swap out one of the hotels as well as changing out the box printing and a few pages out of the instruction booklet. There’s no details of the price but counting the parts in the back of the booklet, there are 501 pieces unless I calculated wrong. The contents of the box include five unnumbered bags and the instruction booklet. 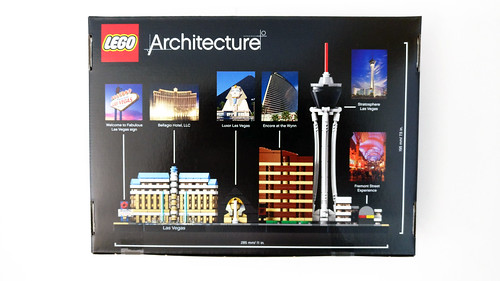 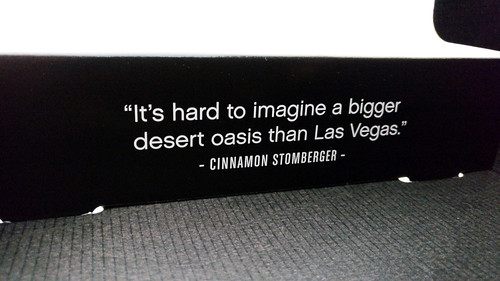 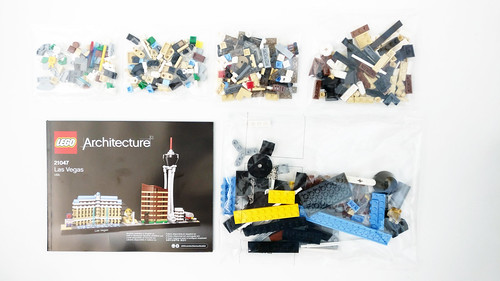 Like with all of the other LEGO Architecture sets, the first few pages talk about the city and the particular buildings that are in the set. Surprisingly, there isn’t that many facts as I would have thought.

As with a majority of the LEGO Architecture sets, the build starts off wih the base of the Las Vegas skyline. There really isn’t much going on here except for the blue which represents the lake for the Bellagio and also the printed 1×8 Las Vegas tile. 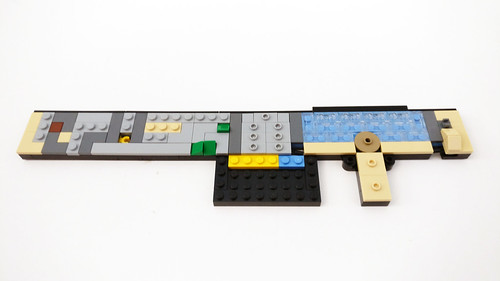 What’s interesting about the build is that it goes from the right to the left starting at the Fremont Street Experience. The barrel vault canopy in the middle is just a bowed roof ridge with some trans-red and trans-orange 1×1 plates. Surrounding the canopy are some hotels which has you stacking plates. You’ll be doing a lot for the majority of this set. 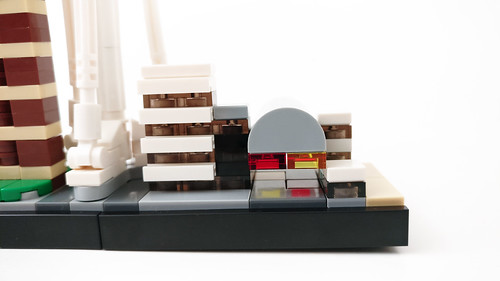 Next up is the Stratosphere and it is stabilized in the middle with some Technic axles and cross axles and the three pillars using some flex rods. The top of the tower is made of an inverted cone that goes around a couple of 2×2 round bricks. Unfortunately there are no details here like the rotating restaurant or the thrill rides. 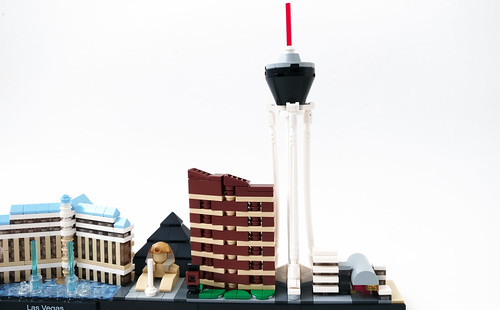 Following that is the Encore at the Wynn and I will say that his is probably the most boring build out of the whole set. It is made up of basically some 1×3 plates, 1×1 plates, and 1×1 round plates that are rotated between brown and tan bricks. There is a slight curve in the building and I do like how LEGO made this work. 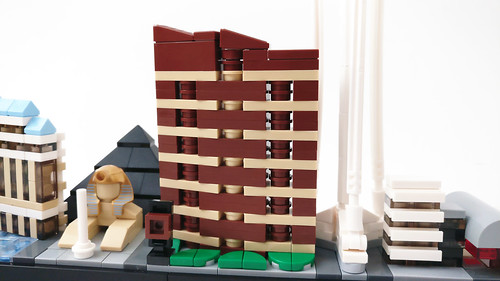 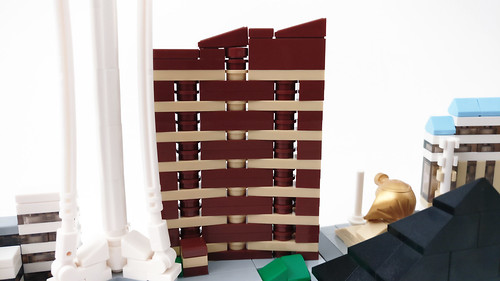 The Luxor is probably the most recognizable building in this set. The signature black pyramid hotel in the back uses various black roof pieces while the Great Sphinx of Giza uses the pharaoh headdress but with new coloring. I have a feeling that this piece will be highly sought after. Note that the pyramid is only half of it and the backside is flattened out. 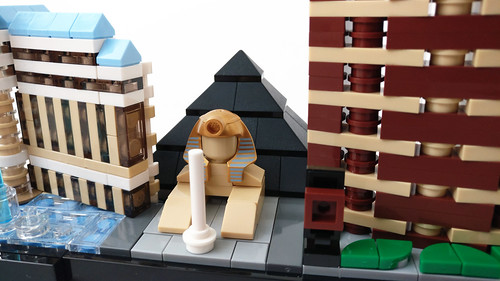 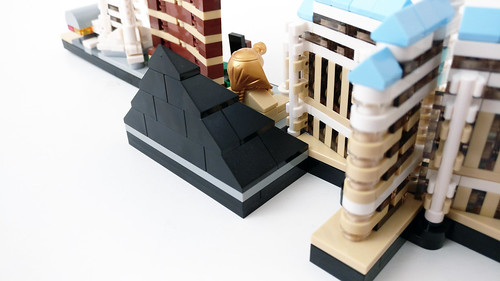 The Bellagio is the most colorful build in the set and it is made using the SNOT technique. The front of the hotel requires you to again stack a number of plates while the back has you stacking some Technic blades with 1×2 plates and 1×2 rounded plates. I do like the little detail in the lake of the fountain show. 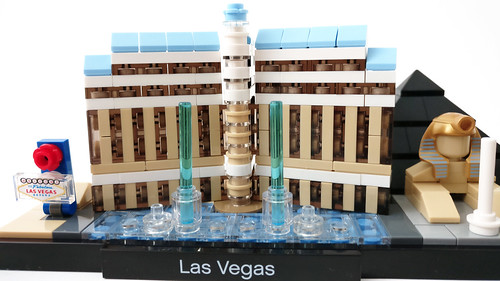 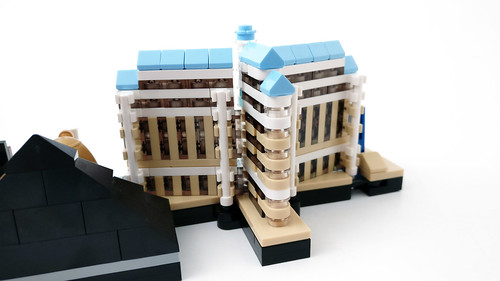 Finally we have the Welcome to Fabulous Las Vegas Nevada sign. It is a printed 1×2 tile and it rests on a hinge along with a red flower. 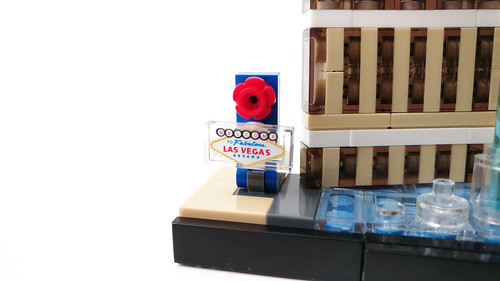 Overall, the LEGO Architecture Las Vegas (21047) is an above-average set for me personally. I do like some of the building techniques used like the curvature of the Wynn and the SNOT for the Bellagio but I don’t like the amount of stacking of elements for the two hotels. It seems like a cop-out but I guess there’s not many ways to create them in a scale this size. 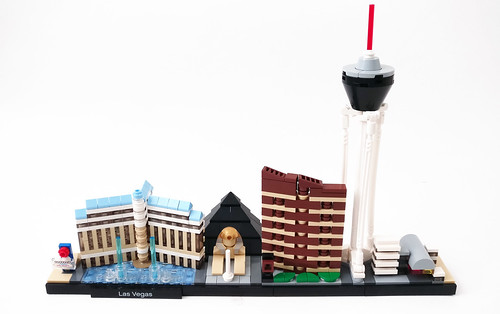 Also since LEGO had to replace the Mandalay Bay with the Bellagio with a fairly quick turnaround, the hotel is out of order on the Strip and it may bother some people which is understandable since this is one of the sets that should be in order. I’m sure some builders will take it into their hands and rearrange the buildings in the right order.

Nevertheless, if you’ve been collecting the Architecture sets up to now, this is a set that you’ll want to add to your collection. 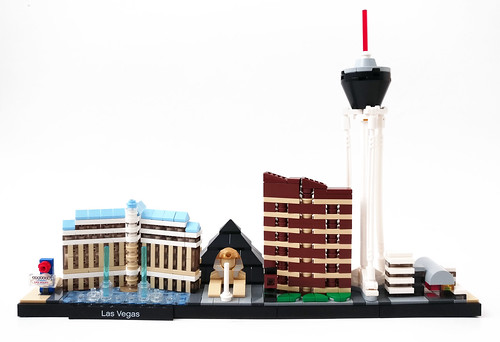