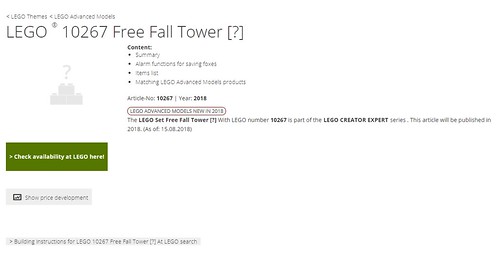 Here’s something interesting that was just sent my way earlier today. According to Brickmerge.de, there’s another LEGO Creator amusement park set that is supposedly coming out this year with the Free Fall Tower (10267). It interesting because we’ve already gotten an amusement park set this summer with the Roller Coaster (10261) and they usually release once a year so twice a year will be really surprising. If it is a legit listing, we probably won’t see it until summer of next year but LEGO could drop a bombshell on us.

Another thing to note is that LEGO usually calms down on the direct-to-consumer set announcements from October to December, at least from the past few years, so it’ll be really surprising to see another larger set coming out this year. The next D2C sets that are rumored to be releasing this year are in September with the LEGO Star Wars Cloud City set and the LEGO Creator Winter Village set.

What do you guys think of a Free Fall Tower set that is listed to be released this year? Do you think it’s a bit too much since we’ve already gotten the Roller Coaster not too long ago? Personally, I don’t think it’s anything verifiable at this time since this is the first I’ve heard of it.