The LEGO BIONICLE Facebook Page has revealed the grand prize for the Battle for the Gold Mask competition. It was previous thought that it could’ve been one of the gold masks that was shown off at New York Comic Con 2014 but today it was announced that there was an eighth gold mask that wasn’t shown at the convention and it is a 14 carat gold Skull Spider mask which is worth about $2,000.

The gold Skull Spider mask is part of a multi-site building competition and you can read more about how you can enter here. 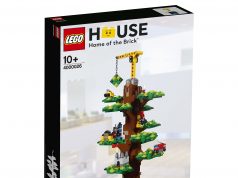