Since today is Thursday, I decided to do a Throwback Thursday review of a fairly older set. It’s something that close to me since technically I’m currently working for the company part-time. This set is the licensed LEGO City Toy R Us Truck (7848) which was first released back in 2010. The set was a Toys R Us exclusive and sold for $44.99 but I managed to get it at a pretty decent price and I couldn’t pass it up. The set contains 356 pieces and comes with two instruction booklets. 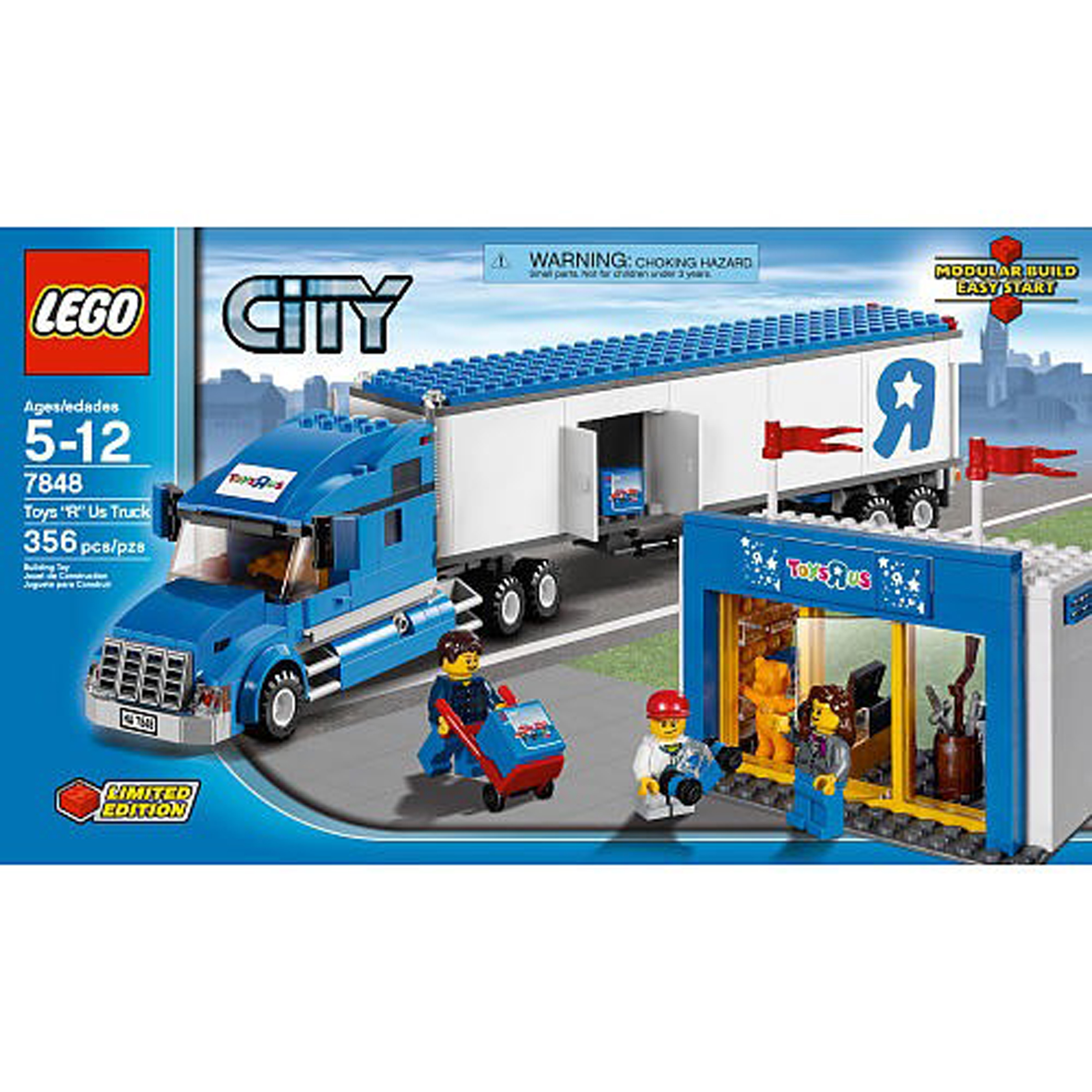 There are three minifigures to the set, the truck driver, a sales girl, and a young boy. The truck driver is a normal-looking minifigure who has a dark blue flannel shirt with printing only on the front with plain blue legs. He has a smiling expression with short brown hair. 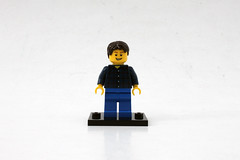 The sales girl, as LEGO’s description for the set, wears a dark grey jacket with a fuchsia colored scarf. She also has plain blue legs. 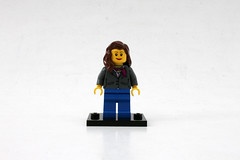 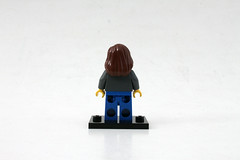 Finally, the young boy wears a mostly white hoodie with short grey legs. Unlike the adult minifigures, he has some printing on the back of the tosto as well. He has a smirking expression and wears a red cap. 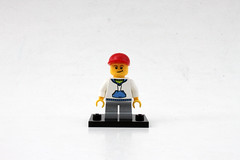 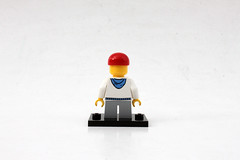 There are two parts to the build, the Toys R Us store itself and the main part of the set, the Toys R Us truck. The store is a pretty simple build and is just a small part of the retail store which is on a 8×16 baseplate. The outside has some small stickers of the Toys R Us logo with a couple of red flags on the top. Inside the store, you get a cash register on a counter. There are also some miniature LEGO sets that are stickered on one side of the shelf and a toy car and hovercraft on the other side of the wall. Next to the door is a barrel with a toy musket, cutlass, and sword. Finally, there’s a yellowish-orange Belville teddy bear that’s wheeled out on a red handcart/dolly. 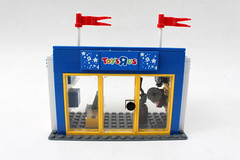 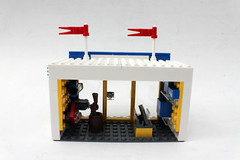 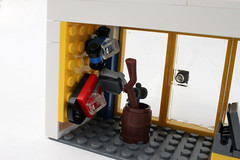 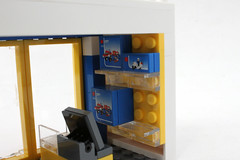 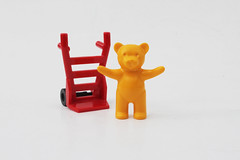 For the Toys R Us truck, it is similar to the LEGO Truck (3221) in terms of build. The only difference is that this one is mostly white and blue with the Toys R Us sticker logos on the front, back, and sides of the truck. It has your typical Peterbilt look which is nice. The top of the cab is able to open up to show a pretty roomy space for the driver. 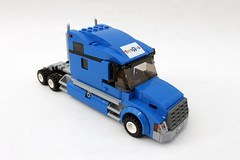 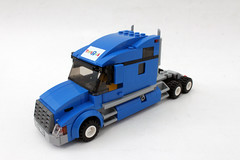 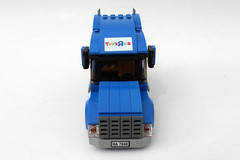 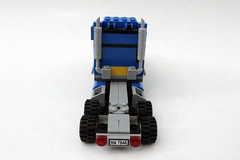 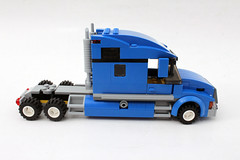 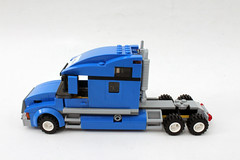 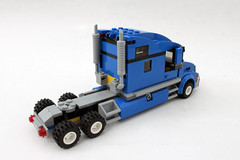 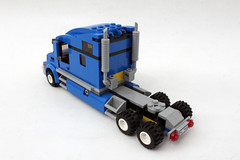 For the trailer, it’s your standard box trailer and it is 32 studs long by 6 studs wide so it’s pretty long, in terms of LEGO builds. Like the truck, it’s mostly white with some blue on the roof. Near the front are some landing gears which is on a hinge piece with some lightsaber pieces. The four wheels on the back of the trailer are on a 4×4 plate which is attached by a modified piece with a pin on top. The end result gives the wheels a flimsy feel to it when you pick up the trailer but it fits fine. There are some double doors on both sides of the trailer as well as one on the back. 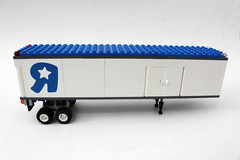 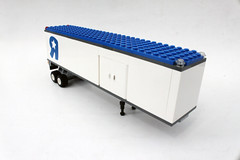 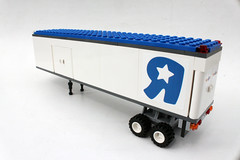 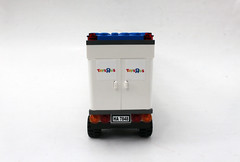 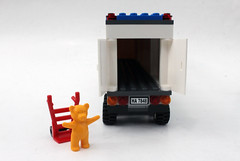 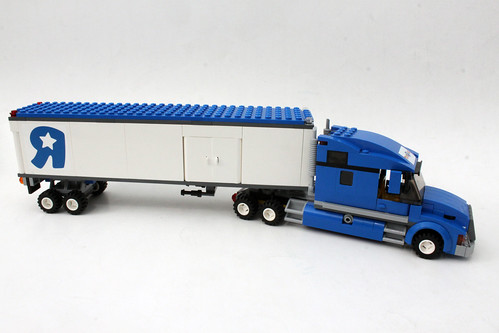 Overall, I really like this set. I had my eye on it for a while now but it wasn’t until I went to Philly Brick Fest and I saw it up close on Brick4Chris’ layout that I decided I wanted it for sure. The small Toys R Us store was a nice addition since the main feature is the truck itself. As for the truck, I like the general look of it as far as trucks go. I’m not sure how much accuracy LEGO was going with the trailer but as far as I know from experience working in the trailers, there are no side doors that are able to open. Other than that, I really don’t have any issues with the LEGO City Toys R Us Truck (7848).

Sadly as cool as the set is, it has already been retired. Luckily the set isn’t as exclusive as you may think because you can still get it at a reasonable price on BrickLink and eBay 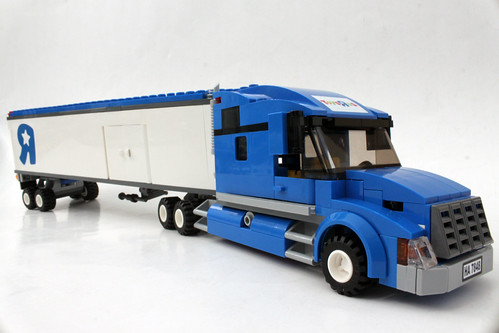 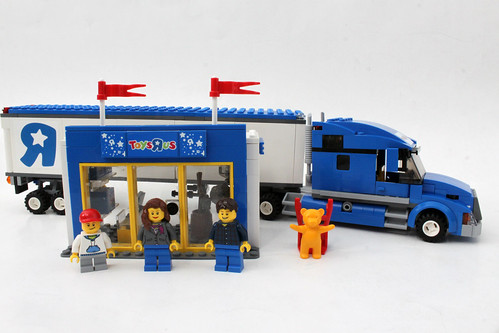