Over in the UK, the new Argos catalog is available and Brickset has found an image of the new LEGO Collectible Minifigures Series 14 (71010) – Monsters. The picture shows off the Mad Scientist minifigure which makes him the fifth one we’ve officially seen with the others being the Rocker Monster, Crazy Witch, Skeleton, and Lady Vampire. I also like the look of the Monsters logo. It gives it a wacky feel which I think Series 14 will be bringing to the table.

The rest of the minifigures on the list that have yet be seen are The Fly, Gargoyle, Grim Reaper, Specter/Ghost/Phantom/Spirit, Bigfoot, Tiger Woman, Werewolf, Zombie Pirate Captain, Zombie Cheerleader, Zombie Businessman, and Plant Monster/Man-eating Plant. The ad shows Series 14 will be available in September so we’ll probably see LEGO officially revealing all of them in the next few weeks or so. 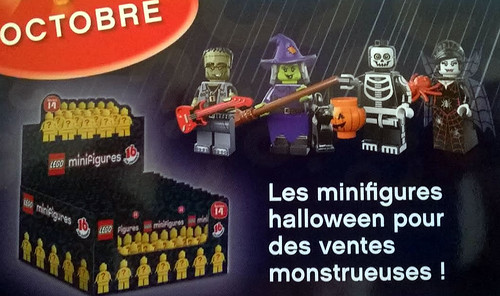