The first of the many minifigures in Series 7 that I really wanted was the Galaxy Patrol. He looks similar to the Space Marine in the Starcraft series with the dark blue color scheme. He has a double-sided face with one side having the normal face and the other with his visor on. His accessories include a jetpack armor with the Classic Space symbol on both sides of the shoulderpads as well as blaster gun. The printing on the torso looks amazing although only the front is printed. The legs also have some printing. Overall, the Galaxy Patrol is one of the best minifigs in Series 7 and is one in the series where you would want an army of. To find this figure in the pack, you’ll find that it’s kind of bulky which is the armor piece. Confirm this by feeling for the gun as well. 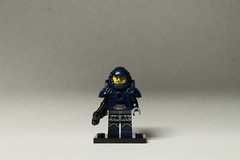 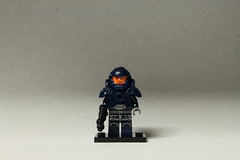