The Ocean King resembles Neptune from Roman mythology or Poseidon from Greek mythology. The main feature of him is his green, scaly Merman tail. His crown is attached to his white hair. He also has the same white beard as Sensei Wu from the Ninjago series. His accessory is the mighty trident which the God of the Sea is known to carry. If you have any the Atlantis set, you can possibly use the Ocean King as their deity. To locate him, feel for the bulky tail piece and the trident. 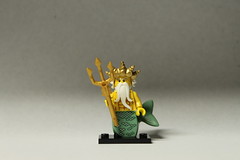