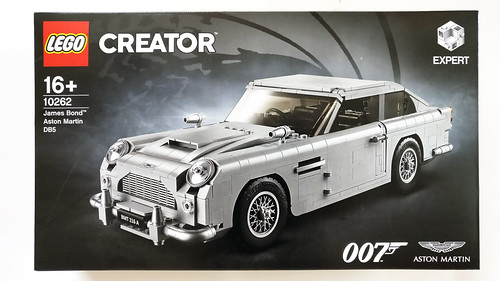 For the past month or so, LEGO has been teasing of a new LEGO Creator set and it was announced that the set would be the James Bond Aston Martin DB5 (10262). The famous car from the 007 franchise has 1,290 pieces and retails for $149.99 and is now available for purchase on [email protected]

The box has a very James Bond feel to it with the dark setting and the gun barrel in the background. The bottom right corner shows the 007 and Aston Martin brands.

The back of the box shows some of the included features of the DB5 such as the hidden machine guns, rear-window bulletproof screen, and even the famous passenger ejector seat. 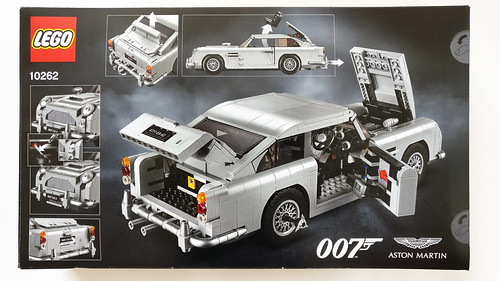 Inside the box are twelved numbered bags in four sets, the instruction booklet, and a small sticker sheet. The sticker sheet has 17 stickers with a majority of them going towards the rotating license plates. 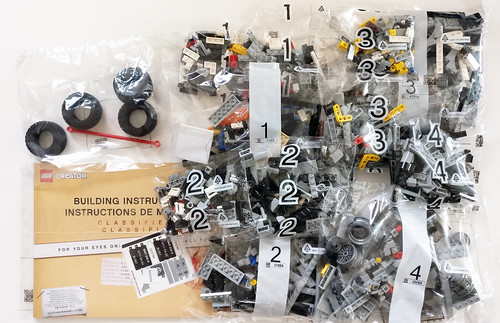 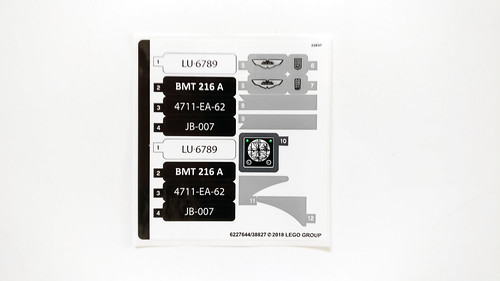 The instructions booklet isn’t like your typical LEGO instructions as it does not show the product on the front page but instead it has a design of a manila folder that shows “For Your Eyes Only.” The first few pages tells you some of the play features of the Aston Martin DB5 as well as a timeline of which movies the car has appeared in with the latest movie being Spectre from 2015. 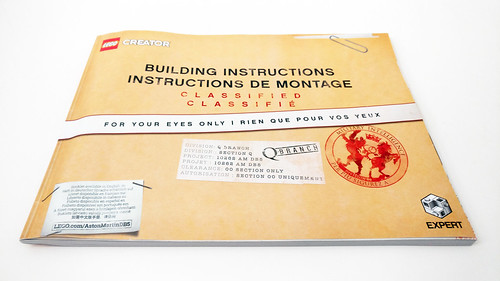 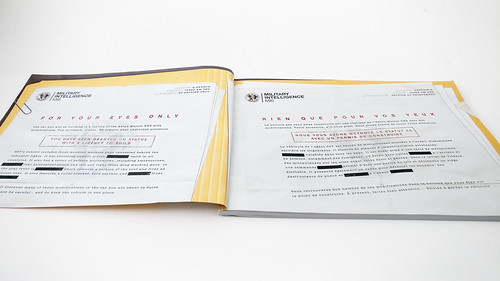 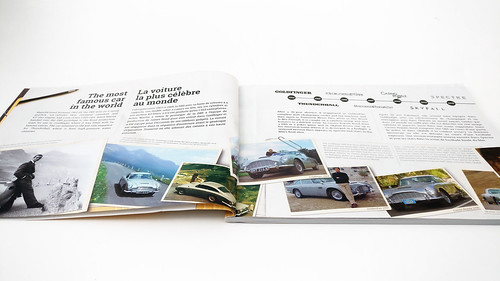 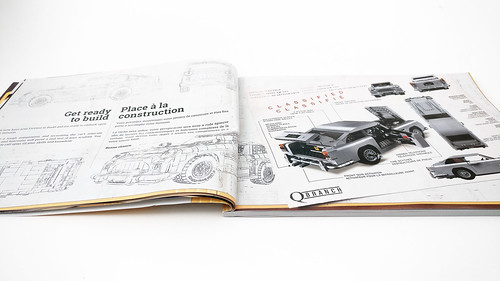 The building starts off with the chassis that uses mostly Technic pieces. Early on, there’s a long red rod that is connected to the gear shift which will be used as a play feature later on. 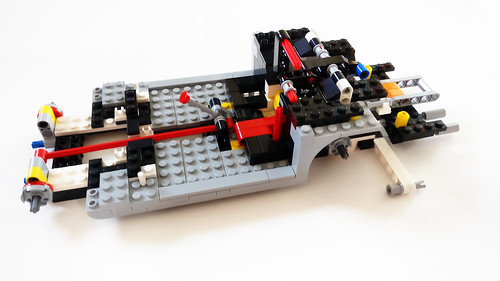 Throughout the build, the booklet will show you a page of a x-ray of a play feature on the Aston Martin DB5 that you will be building and the first one is the ejector seat. This section makes use of rubber bands to launch the seat. 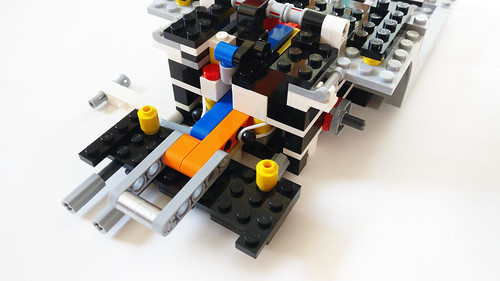 The second set of bags are used to create the exterior of the car. I do like how the doors use some steering knuckle arms as the door hinges and they fit in perfectly on the inside. Furthermore, the driver’s seat door has a secret opening for a telephone. 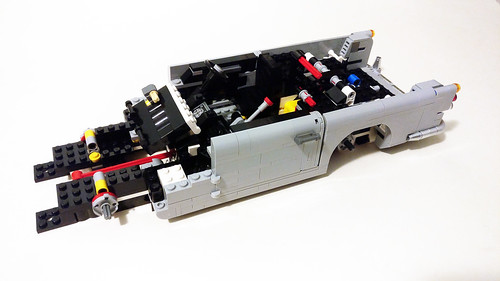 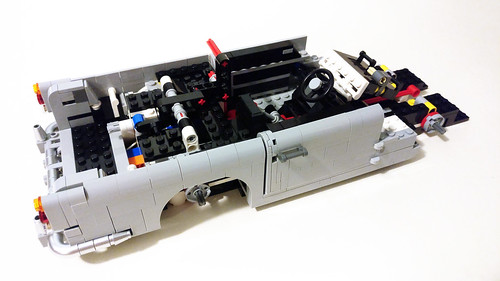 The dashboard is another interesting section of the car. It is connected at an angle using clips near the steering wheen and at the bottom. 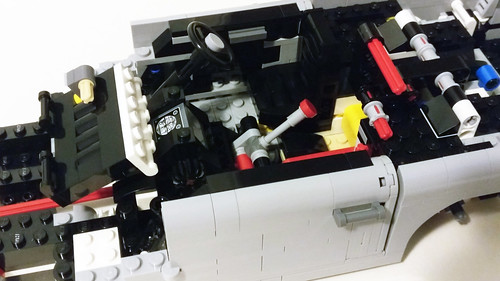 For the third set of bags, the parts are mostly used to build the exterior of the DB5. The red rod at the beginning that is connected to the gear shift is now connected to the front headlights which also doubles up as the machine guns. The front rotating license plates are just some stickers on a 1x1x3 brick that turns using a 1×1 plate with shaft. 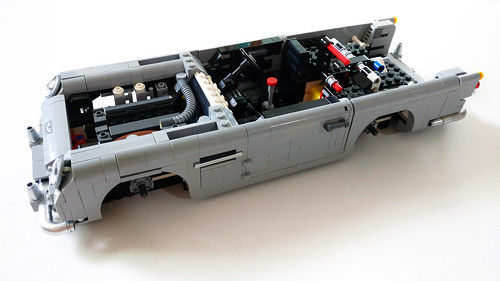 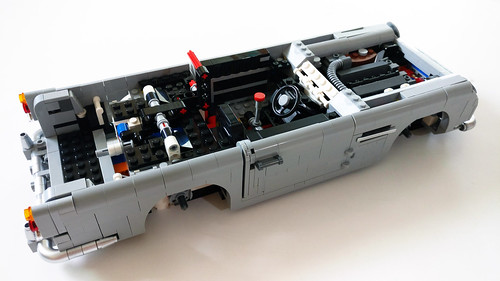 The engine uses a number of various parts that you wouldn’t think would go together. It mainly uses some 1×1 bricks with handle with a white stud for the individual throttle bodies and pistols for the manifold. The front radiator grill uses some printed 1×2 tiles that goes between some 1×3 arches. 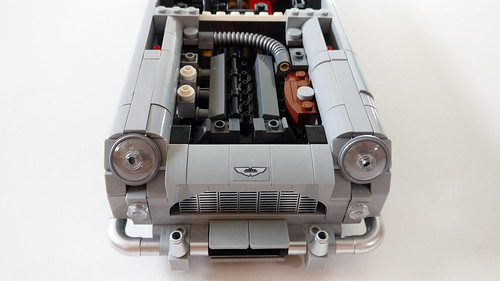 The last set of bags are used for the top part of the Aston Martin DB5. The hood is one whole sectional build and is easily removable to access the engine. 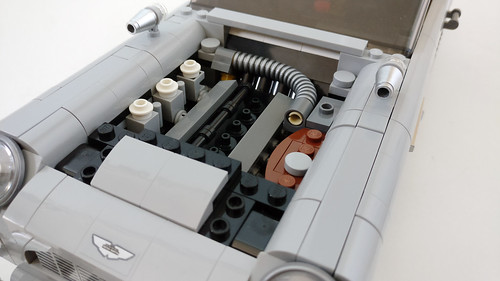 The rear window uses a 2x10x3 trans-black window piece that is attached sideways using some clips. The rear side windows have an even more interesting building technique as they are slightly angled to match up with the rear one. It has to use some small stickers so it can match up with the curve on the back. 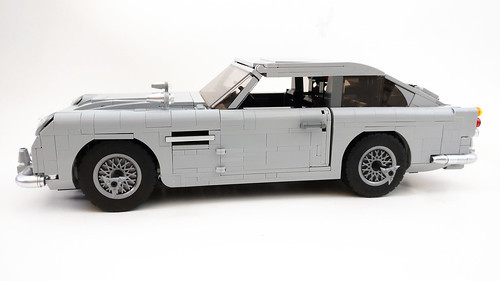 The trunk of the DB5 is simple as it is connected on some hinges however it does incorporate the rotating license plate like with the front. It doesn’t go flush to the rear window as there is also the bulletproof screen that goes between them. 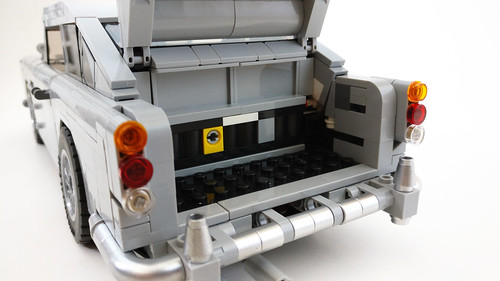 Probably the most fun play feature of the Aston Martin DB5 is the opening roof and passenger ejector seat. The whole roof section is connected by a couple of clips that are on the front windshield. The passenger seat is place on a red Technic axle that goes into a 1×1 yellow brick with hole. 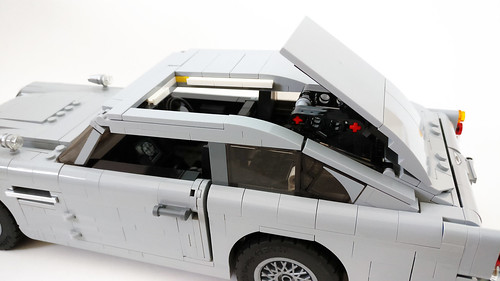 As I been talking about throughout the review, there are a number of play features with the Aston Martin DB5. The revolving licensing plates are a staple in the James Bond movies and they’re implemented in a simple, yet effective way. The numbers “BMT 216A” (UK), “4711-EA-62” (France) and “LU 6789” (Switzerland) are the same ones that were used in the movies. 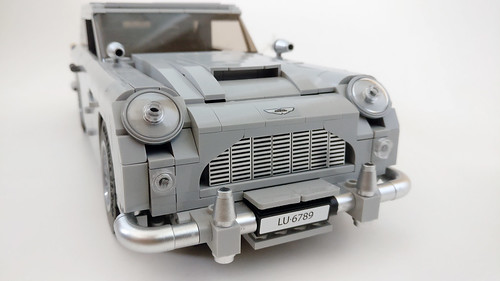 The front machine guns behind the headlights actually work very well as I thought the Technic rod would get stuck when shifting the gear. 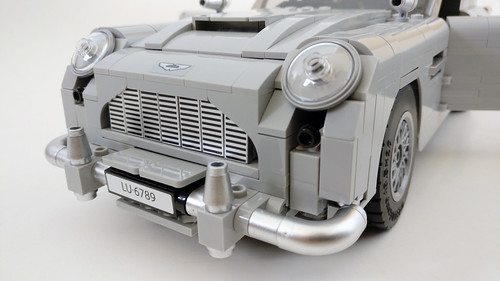 On the wheels are some tire scythes are just some gray shurikens and extend using some black telescopes and attaches onto the wheel. This feature was seen in Goldfinger where it was used to disable Tilly Masterston’s Ford Mustang. 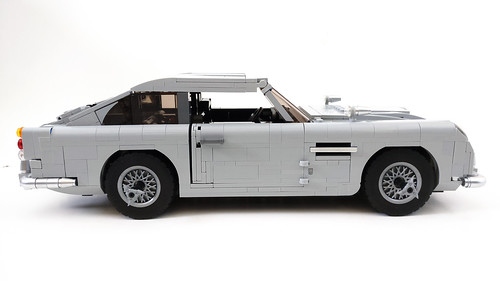 The radar tracker is right underneath the dashboard and it is hidden behind the air conditioner vents which can be accessed by turning the black gear on the passenger side. 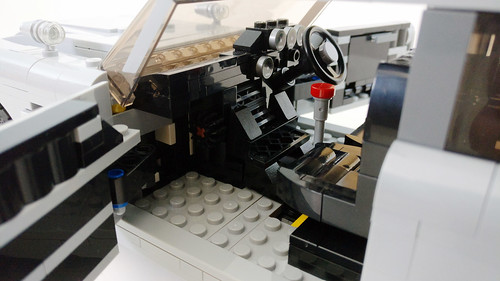 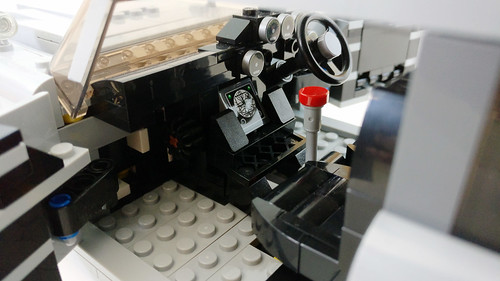 Also inside the car is the hidden telephone behind the driver’s side door. Although it is built in the Aston Martin DB5, it was not actually seen in use James Bond movies. 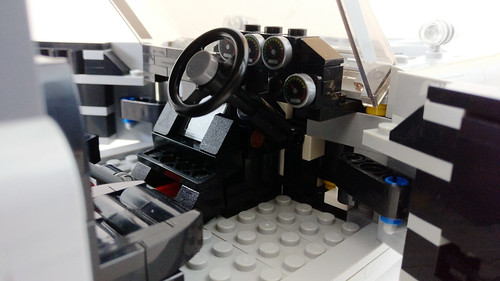 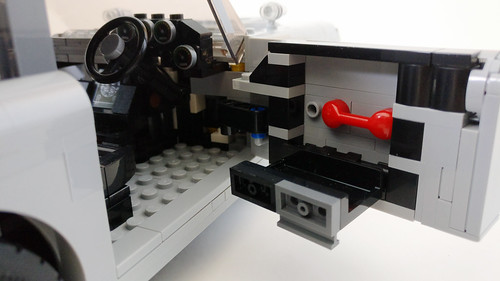 As I mentioned before, the rear bulletproof screen is hidden between the rear window and the trunk and it can be activated by turning the right muffler. This is the one feature on the set that isn’t smooth activating because the screen will tend to get caught and you’ll have to physically wiggle it out. This is unfortunate due to the tight space it has to maneuver in and out. 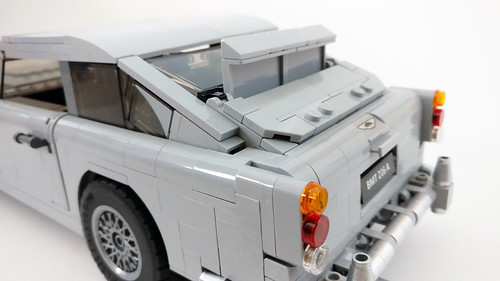 Finally, we have the main play feature and one of the best I’ve seen in a LEGO set with the ejector seat. The seat is on a Technic axle and the whole mechanism is connected to the rear bumper using a number of Technic parts. Pulling on the rear bumper will trigger the roof to retract and pushing back on the bumper launches the seat.

The LEGO Creator James Bond Aston Martin DB5 (10262) is a set that I didn’t expect LEGO to release due to the nature of the subject matter but it seems to be welcomed with open arms. This set is substantially different to previous years’ Creator Expert sets with all the play features it has. I’m not ashamed to say that I spent quite a while playing with the ejector seat after I finished building. 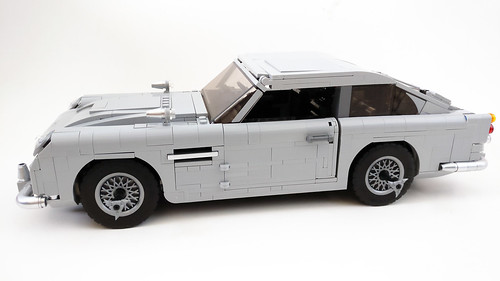 I do also have some gripes about the set as well. The main thing is the blocky look of it. The real Aston Martin DB5 has very distinct curves to it and at certain angles of the set, it doesn’t look as good.

The Aston Martin DB5 may not appeal to some collectors of the Creator Expert line but for those who are also fans of the James Bond 007 franchise, this set may be for you.