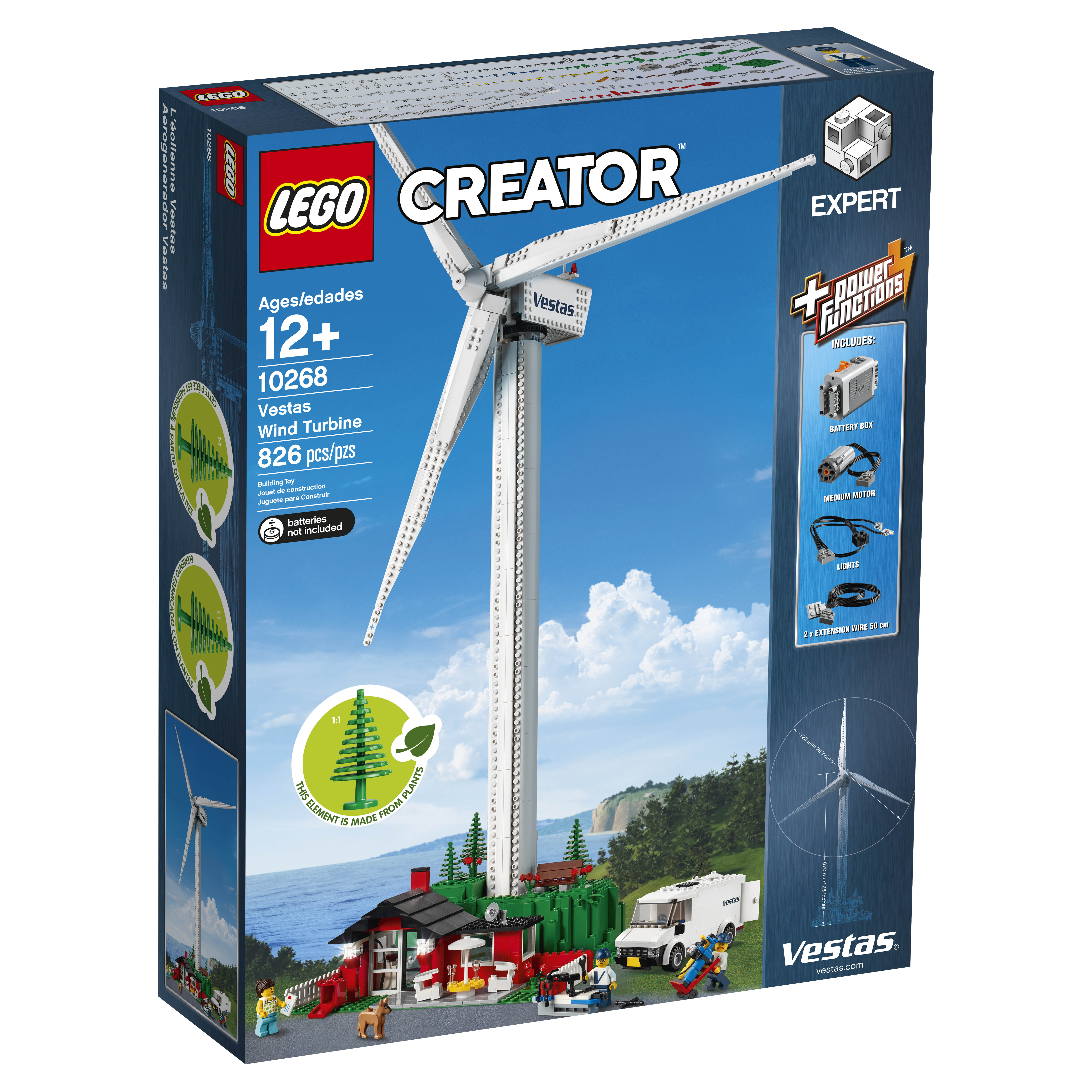 The New York Climate Week is currently going on and to celebrate the event, LEGO has released another set from “Out of the Vault” with the LEGO Creator Vestas Wind Turbine (10268). The set contains 826 pieces which is a bit more than the original 4999 version from 2008 and it retails for $199.99. There will be no VIP early access for the set and it will be available starting on Black Friday, November 23. One thing to note is that the 4999 version was only available to Vestas employees but you can now get your hands on it soon.

The Vestas Wind Turbine uses a couple of the new Plants from Plants trees for part of the set to replace the old tree elements from the original set. Like before, Power Function is included to power the wind turbine as well as the lights.

We’ll have our review of the set when it comes in but feel free to check out the press release and more images of the re-released LEGO Creator Vestas Wind Turbine (10268) below.

• The first-time consumers can purchase a LEGO set featuring new ‘Plants from Plants’ elements – made from plant-based plastic sourced from sugarcane
• A key collaboration between the LEGO Group and Vestas®, the world leader in sustainable energy solutions
• Through investments in wind power the LEGO Group balances 100% of the energy used to make LEGO bricks with energy from renewable sources.
• Available from Black Friday (November 23rd)

[26th September 2018] While the world-renowned New York Climate Week (24 – 30 September) is live, the LEGO Group has today unveiled the latest LEGO Creator Expert set to come ‘Out of the Vault’ – Vestas® Wind Turbine following popular demand of the original and to celebrate play, creativity and imagination whilst also raising awareness about sustainability and renewable energy in partnership with Vestas®. This is the very first set available to purchase that features oneof the all-new sustainably sourced plant-based plastic LEGO elements, Plants from Plants. This renewable energy focused set will be available directly in LEGO Stores and shop.LEGO.com this Black Friday (23rd November 2018).

The LEGO Creator Expert Vestas® Wind Turbinehas been designed in partnership with the sets’ namesake and world’sleading provider of sustainable energy solutions, Vestas®, who have installed 65,000 wind turbinesin around80 countries.

The 826-piece model stands nearly a meter-high towering over a wooded hill, featuring the new ‘Plants from Plants’ spruce tree. Made from plant-based plastic sourced from sugarcane, the inclusion of these elements is part of the first steps in the LEGO Group’s ambition to use sustainable materials in productsby 2030 and packaging by 2025.

This latest installment in the LEGO Creator Expert Series has been designed to provide a challenging and rewarding building experience with a touch of nostalgia, with builders discovering a house complete with a furnished patio and a working porch light and powered wind turbine, as well as three LEGO Vestas® servicemen Minifigures and a LEGO dog.

The set measures 100cm high, 72cm wide and 31cm deep and features adjustable wind blades (not as big as the real thing of course, which measures more than 2m longer than a London double-decker bus, but impressive none the least), detailed tower, movable nacelle with aircraft warning lights and power functions to automate the set.

The LEGO Vestas® Wind Turbine celebrates creativity in addition tothe LEGO Group’s commitment to making a positive impact on the environment. Through investment in wind power the LEGO Group balances 100% of the energy used to make LEGO bricks with energy from renewable sources.

Tim Brooks, Vice President, Environmental Responsibility at LEGO Group commented: “We strive to make a positive impact on the environment and are committed to climate action and to use sustainable materials in products and packaging. This wind turbine celebrates our first steps in bringing these ambitions to life and we hope it will inspire builders to learn about renewable energy. In August we released the first LEGO elements made from plants and now our fans around the world can buy a LEGO set containing these unique elements.”

Morten Dyrholm, Group Senior Vice President of Marketing, Communications and Public Affairs at Vestas® said: “Today, wind energy is the cheapest source of energy in many markets, which have made wind turbines asustainability icon across the globe and we areproud to partner with the LEGO Group on this relaunch. The original Vestas® wind turbine LEGO model was specially created for Vestas® to promote wind energy to a small audiencewithin energy and as such, today’s relaunch to the global LEGO community tells the story of how wind energy have gone from niche to mainstream, not just within energy butthe entire world.”

The LEGO Creator Expert Vestas® Wind Turbineis the latest in the Creator Expert line of products and will be available to buy onBlack Friday (23rd Nov) directly from LEGO Stores and shop.LEGO.com.