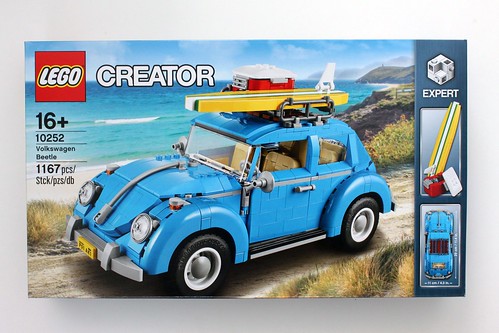 was officially announced last month and is now available for purchase for VIP memebers at LEGO Stores and on [email protected] LEGO has graciously sent a copy of the set for us to review. The set contains 1,167 pieces and retails for $99.99. The Volkswagen Beetle follows along the same scale of some of the other LEGO Creator sets that have been released in the past like the Volkswagen T1 Camper Van (10220) and the Mini Cooper (10242). The contents of the box include eight numbered bags, the instruction booklet, a sticker sheet, and four loose tires. 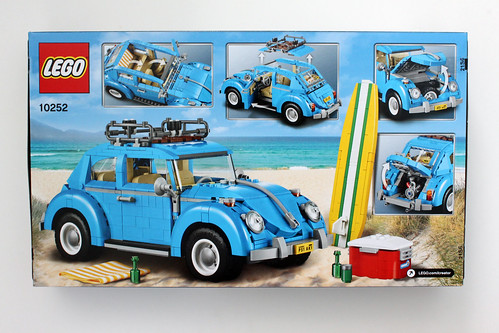 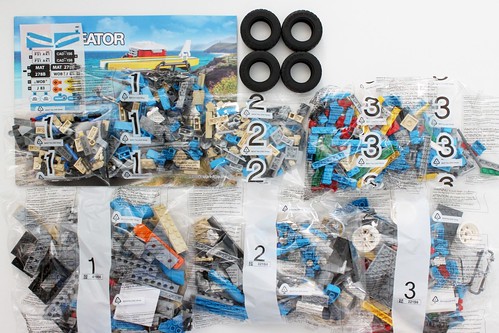 Some notable things on the sticker sheet are the different license plates that you can use including the classic yellow California plates, UK, Germany, and Australia. There are two pairs of each for the front and back plates. 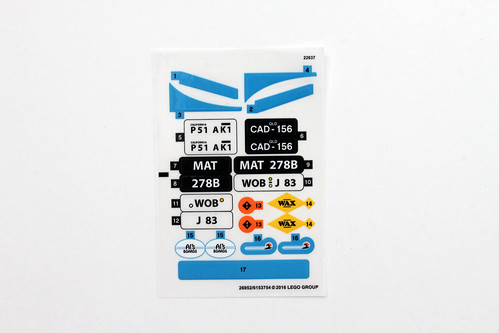 The first set of numbered bags takes you through step 65 and it lets you create the chassis for the Volkswagen Beetle as well as some of the rear of the car. The base of the car is built rather quickly using Technic parts to give it a solid foundation. Immediately after, you build the 4-cylinder air-cooled engine which is located in the back of the Beetle. Additionally, you’ll also be building the back seating area as well as the rear fenders using a couple of the new dark-azure 6x6x2 round bricks. The back seats are able to fold to access the rolled up beach towel that is included. 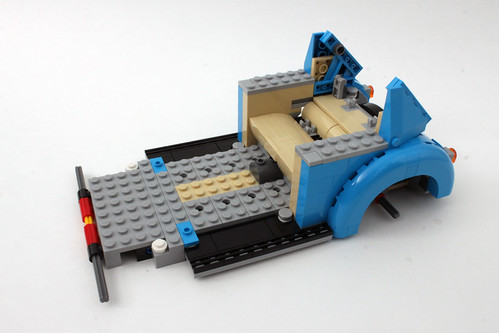 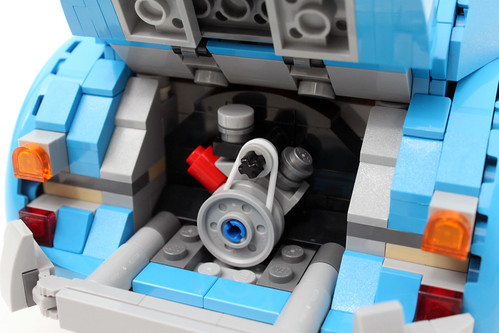 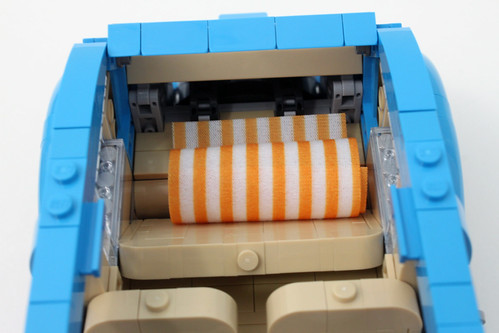 The next set of bags are used to create the front of the Beetle. The rest of the interior is also completed with the front seats as well as the steering wheel, speedometer, gear shifter, and handbrake. One thing that is missing but could have been included were the pedals. In the front of the Beetle, you have an area for the gas tank as well as a printed 1×1 round tile for the Volkswagen gas cap. After the first two set of bags, you can see the Beetle take its iconic shape. 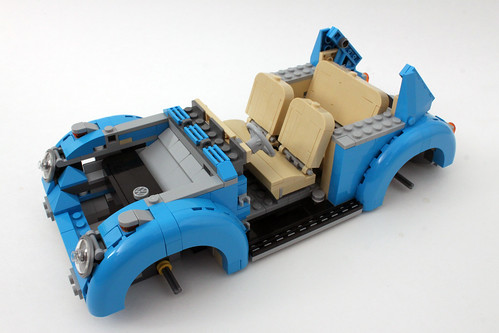 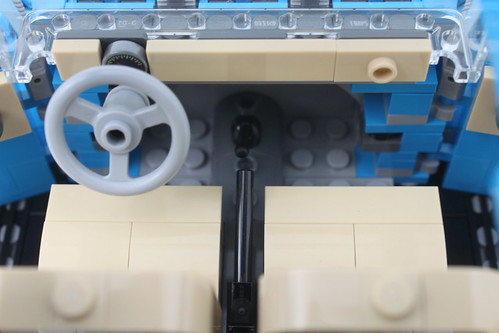 The last set of bags builds up both of the doors which are attached to the car using some clips behind the front fenders. You’ll notice an ingeniuous use of the gray telephone piece as the door handle on the inside. 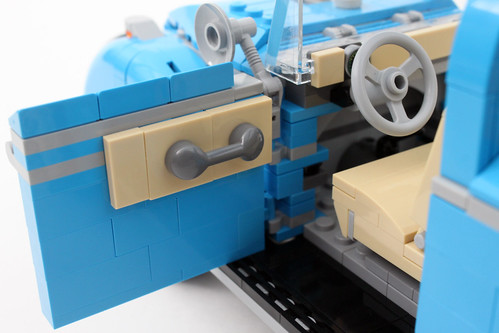 The front and rear windshields do have some stickers to enhance the look of the just a little bit more. The front has some stripes on the sides to represent the Beetle’s pillars. The back has three small stickers that give the car more of a retro feel. There’s a orange and black caution sign, one for Al’s Boards, and another one with the word Wax. 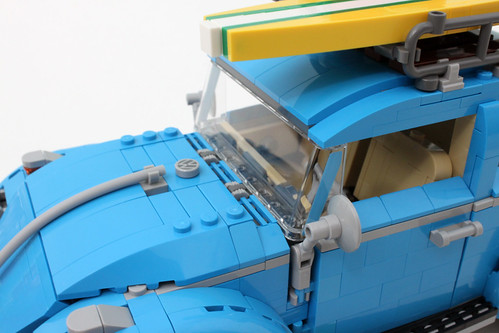 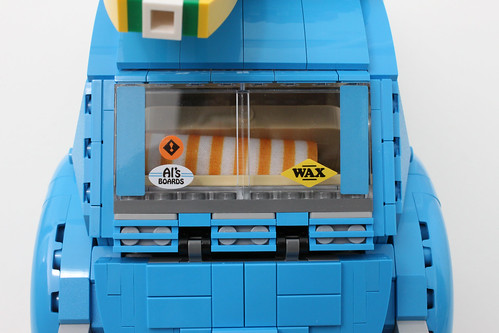 Next up is the roof of the car along with rails which holds a cooler box and a yellow and green surfboard. The cooler is filled with some beverages that includes a printed can 1×1 round tile which you get and extra of. There are also some bottles and 1×1 trans-light blue cheese slope pieces to represent ice. The surfboard is held on by some rubber Technic connector pieces to keep it from moving around too much. 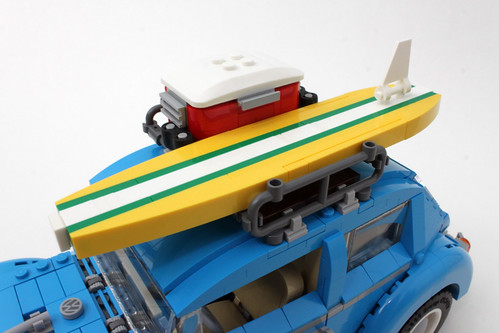 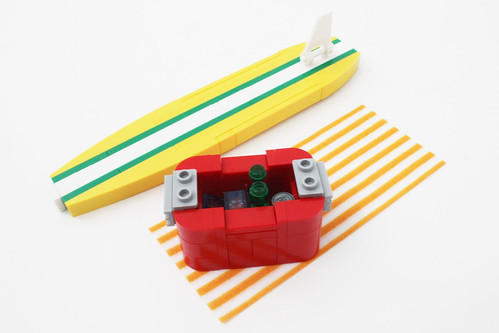 You also build the front and rear bumpers. Again, there are four different types of license plates you can use. I chose to use the yellow California plates since I’m from California but it’s up to you to use whichever plates you desire. 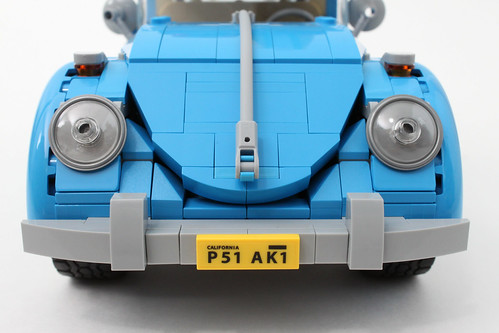 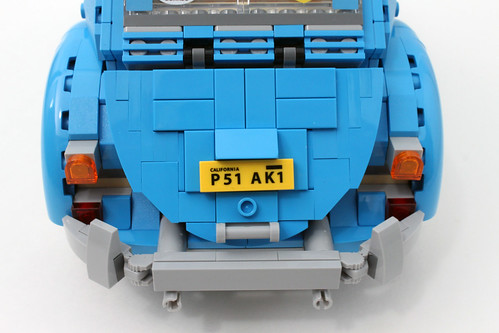 Of course, you also have the wheels with the distinctive round hubcaps. You also get the smaller spare wheel one to put under the hood in front of the gas tank. 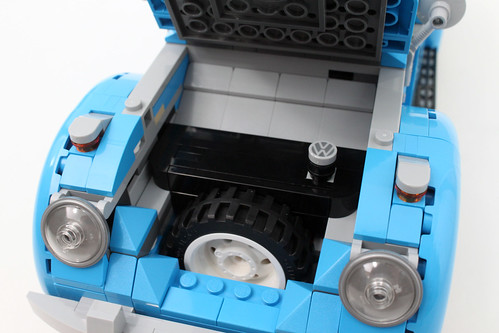 . I was excited to build the set and it was a very fun build throughout. It took me about 3 hours to build although I was doing other things in between. 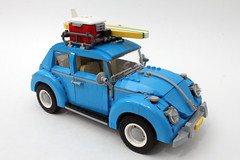 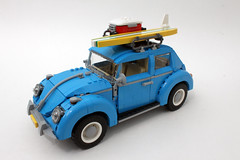 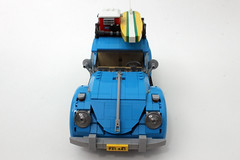 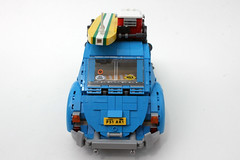 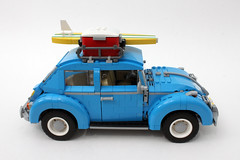 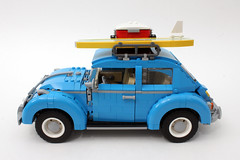 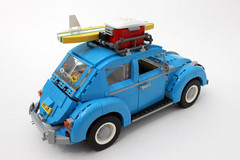 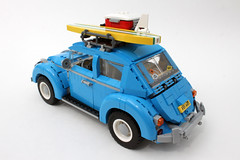 One thing I really like is all of the dark-azure blue parts the Volkwagen Beetle has. I’m pretty sure people will be buy multiple sets to get more of the parts in this color. The car will make a great display piece as it does stand out quite a bit.

Some of the features that were included are pretty neat like the the opening hood and trunk to show off the gas tank/spare wheel and engine, respectively. The addition of the beach items like the towel, surfboard, and cooler were a nice touch as well.

I would definitely recommend the new Volkswagen Beetle (10252) as it is really a fun build and it lives up to the standards of the Creative Expert type of sets. Plus it’ll look great sitting next to the Volkswagen T1 Camper Van (10220) if you have that set as well. The retail price of $99.99 is easily justified by the overall build.

and will be available for the general public on August 1. 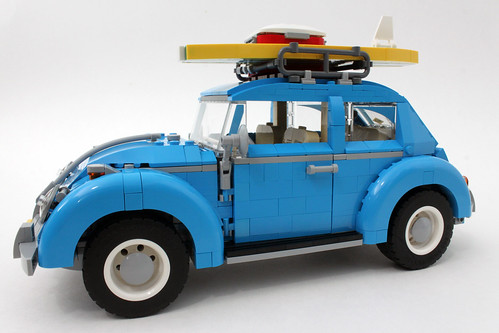