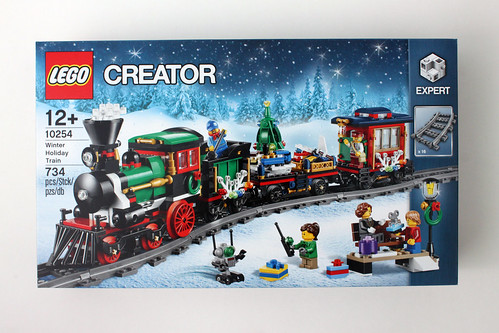 Last month, LEGO officially announced the next set in the Winter Village theme with the LEGO Creator Winter Holiday Train (10254)

. LEGO released another Holiday Train (10173) back in 2006 but this is a completely new train unlike what happened last year with the winter set. If you remember, LEGO released the Winter Toy Shop (10249)

and a lot of people weren’t happy with that since it was just a rehash of the previous toy shop with slight updates. For the Winter Holiday Train, it is slightly different than the previous one and not a total copy. It comes in at 734 pieces and retails for $99.99. The contents of the box include one un-numbered bag, six numbered bags, 16 loose track pieces, and the two instruction booklets that are neatly sealed.

One thing to note is that I do not own 10173 so I have no basis for comparison and will just be reviewing this new set. 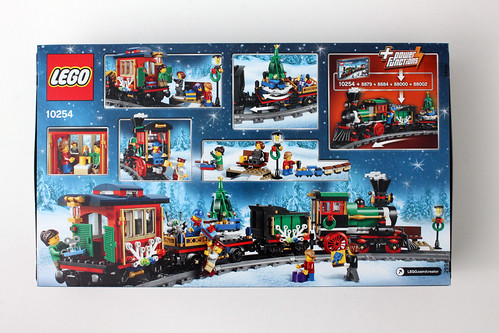 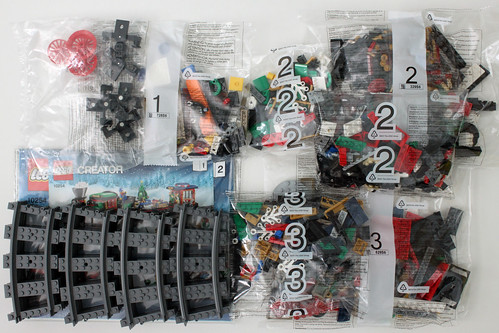 There are five minifigures in this set, a locomotive driver, ticket collector, grandmother, boy, and girl.

The locomotive driver has on some blue overalls with some tools printed on the front pocket. He has a red scarf around his neck and a blue cap to complete his look. His accessory is a shovel. 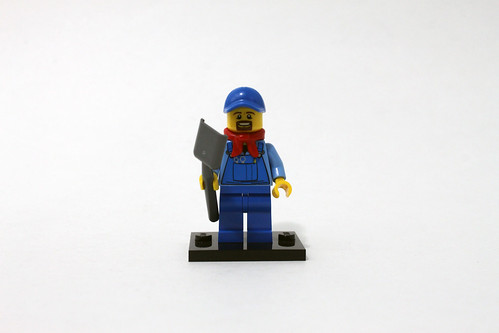 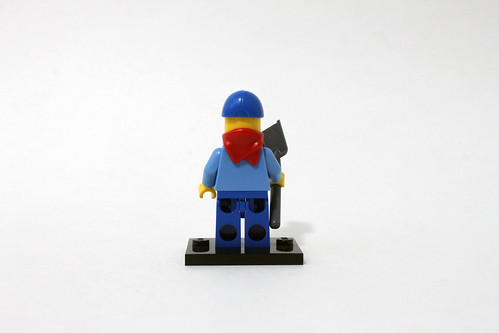 Next up is the ticket collector. He’s an older gentleman with a torso that’s been used many times before but it still works. The face printing is decent with him having sort of a mutton chop style. His accessory is a tan satchel that goes around the torso. It’s a fairly rare piece that has only appeared in nine sets with the last one being in 2014. 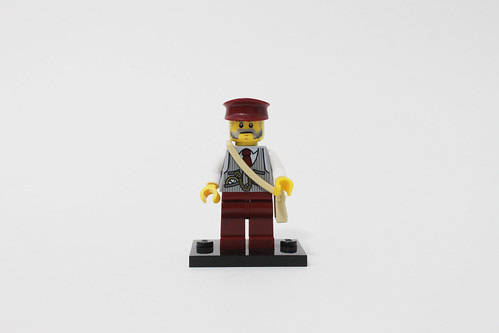 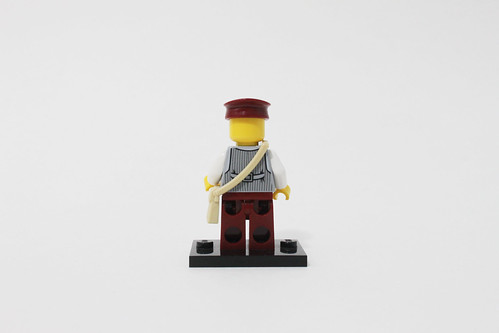 For the grandmother, the black coat she wears has only been in one other set which was for Penguin in the Batman: The Penguin Face off (76010). Her wavy hairpiece is also a very rare piece in the reddish-brown color as it has only appeared in two Friends sets. She does have a double-sided head with a sleepy look on the other side. 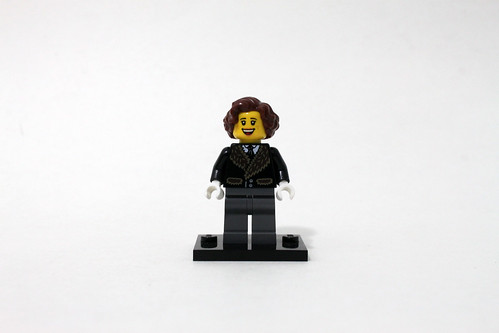 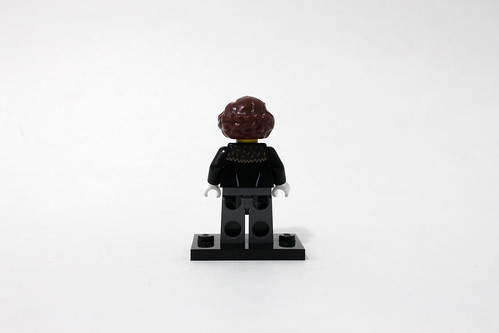 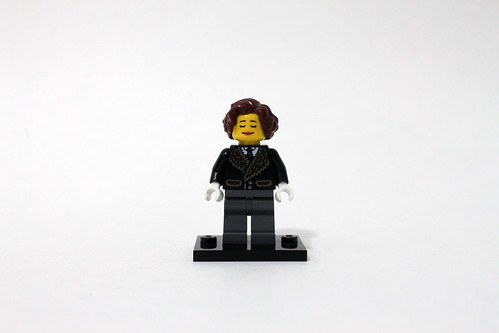 Follow her is a young boy. He has on a red sweater with a red vest over it. There’s some printing of a walkie-talkie in the front pocket and the back has printing of an anchor with an octopus arm. The head piece isn’t too special but he does have Luke Skywalker’s wavy hair. His accessory is a walkie-talkie piece which acts as a remote control for some of the toys that we’ll see later. 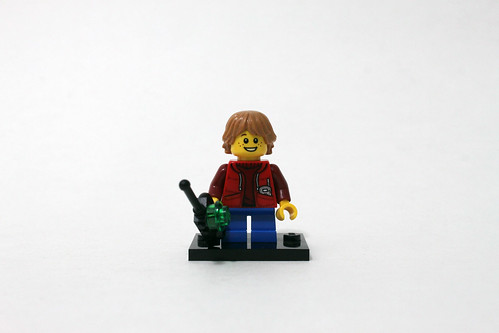 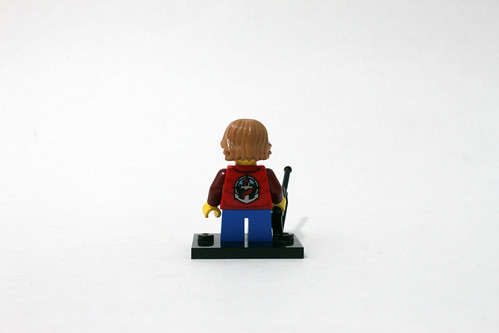 Finally for the girl, there’s nothing too special about her either. She has a heavy green jacket with gray gloves and tan legs. 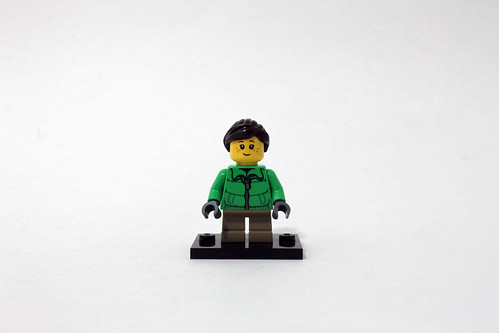 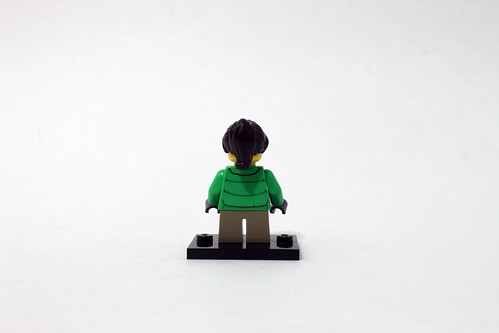 To the more exciting part of the set, the Winter Holiday Train itself but first, you’ll be building the other accessories for the set which is all contained in the first numbered bag. First it lets you create the little boarding platform consisting of a bench and a lamppost. The bench is only six studs long so it’s pretty short. I do like the lamppost that is situated next to the bench. It’s a simple build but very effective and I do like the way the lamp is created with the clear glass dome and a trans-yellow cone. On the front is a wreath made from a green life preserver and a red flower. For the whole boarding platform as a whole, I do wish it was a little bigger. Along with the WInter Holiday Train, you also have 16 curved track pieces to create a whole circle for it to go around. 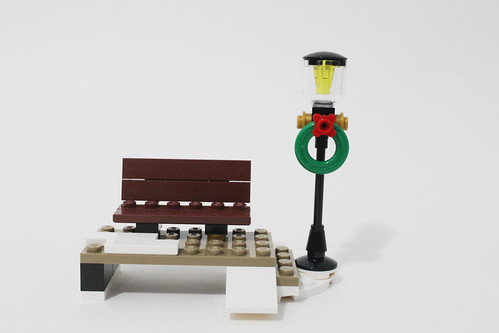 After that, you have some colorful presents like a round purple one, a blue and red one with a bow on top, and a yellow and blue one. There are also a lot of toys such as a wind-up car, fire truck, remote-controlled robot, sailboat, and a spaceship. The spaceship is mentioned to be a reference to the Blacktron theme but I can’t see which set it is. 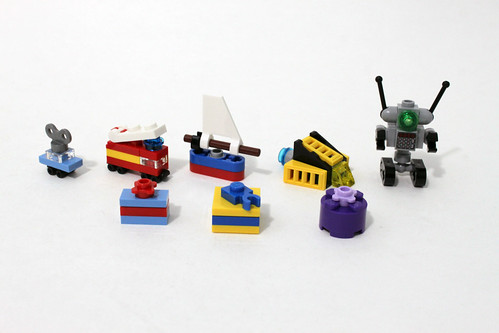 For the next set of bags, you have a majority of the Winter Holiday Train. You first build up the locomotive. Once you start building, you find out that it is actually made up of two part, the chassis and cab of the locomotive and the front wheels.

In the front, there are a couple of R2 astromech heads and bodies used on each side for the piston area which give it more of a classic look. For the rear wheels, I believe the large red wheels have only been in one set with the Toy Story Western Train Chase (7597). 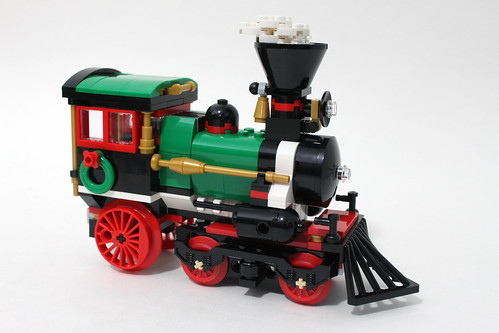 Next up is the section for the front wheels. These wheels are also new but are a smaller size than the rear ones and are covered with some motorbogies. The front of it has a new cow catcher piece that looks excellent and will be highly sought after by train enthusiasts. The top of this section has a new plate with a pin on the top to attach to the chassis.

The smokestack in front of the train looks very nice as it shows it with some white steam coming out from the top. This just uses some 2×2 round plates to simulate the effect. 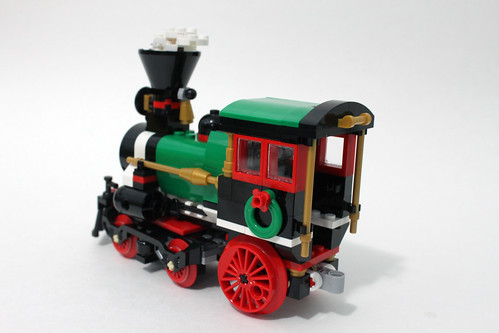 For the cab, it’s actually a fairly small space with just enough space to fit the minifigure inside. This area is also used to hold the wires for the Power Functions if you choose to add it. 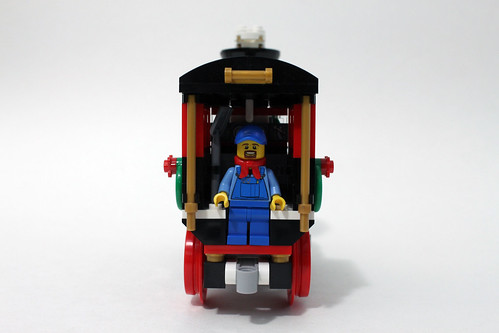 The coal tender is next and it is the smallest car in the Winter Holiday Train however its diminutive stature does not take away from some of the details it has. There are white leaf pieces on either side with some colorful lighting. I do like the choice of colors for the car with the green and black with gold accents. If you’re using Power Functions, this area is also used to hold the battery box. Connecting the coal car to the locomotive doesn’t use the magnets like with the other cars but with a Technic pin which makes it easy to come off. 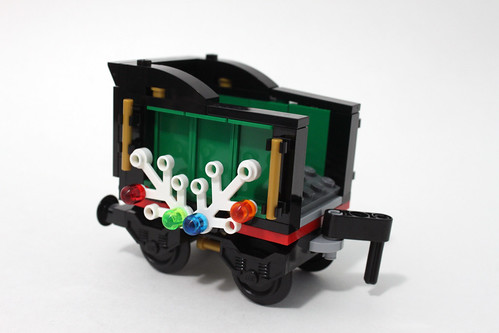 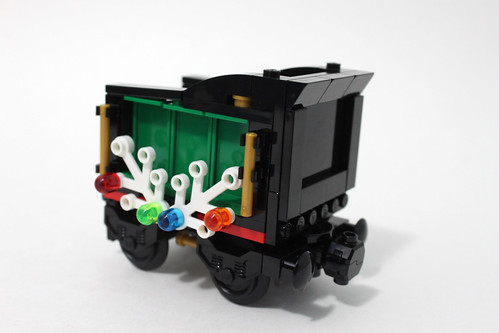 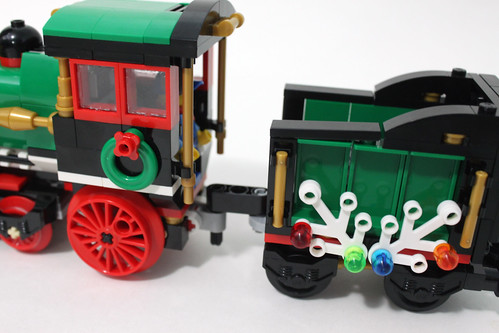 The flatbed wagon is probably my favorite part of the whole Winter Holiday Train. On the front, you have the centerpiece of the car with the Christmas tree and miniature train. This area has a hidden play feature when the train is rolling, it will make the base of the tree rotate. To do that, it uses a worm gear to turn the other gear that is attached to a pin through the turntable piece. Towards the back of the flatbed wagon is a little area for all the little accessory builds. 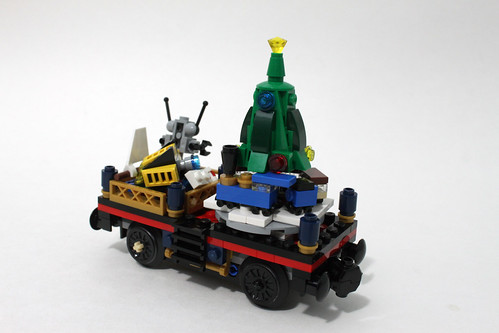 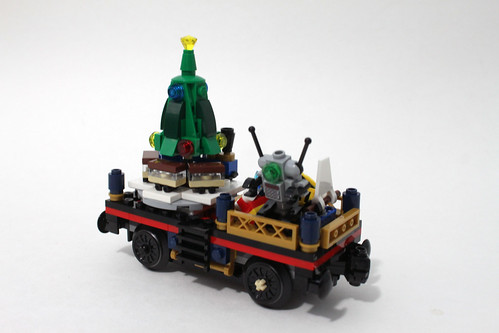 Finally we have the caboose. It is rather small but there nice details throughout. Again, you have the white leaves with colored lights on either side of the car. The color scheme of the car looks great with the red walls with the dark blue roof. The removable roof also has some more of the pearl-gold for the lanterns. 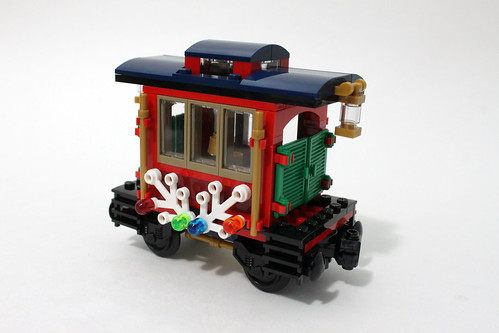 The inside of the passenger car is extremely small with room for only two seats and a table. There’s no legroom for another minifigure to fit in there without forcing it. Maybe one more seat to fit all the passengers would have been nice. 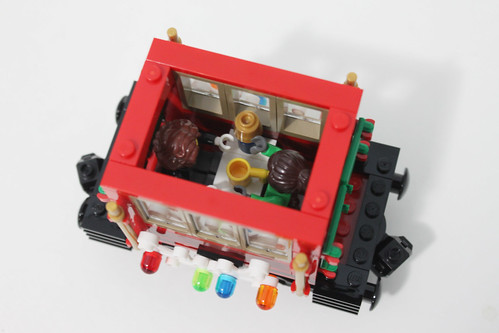 is a decent set that is far superior than the Winter Toy Shop from last year as it is not a duplicate of a previously released set however it doesn’t match up with some of the other Winter Village sets that have been released so far.

My favorite part of the train has to be the flatbed wagon with its rotating tree feature. The locomotive is decent and it looks very festive. I do like the detailing on the smoke coming out from the smokestack as it is simple but effective. The other two cars of the Winter Village Train isn’t as cool in my opinion but they do add to the train as a whole. I do appreciate that you can add Power Functions to it and to not include it with the set brings the price down to what we’re used to seeing for these Winter Village sets. 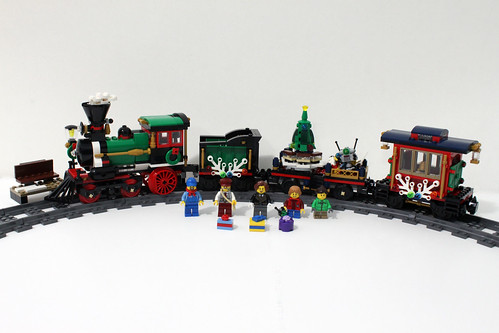