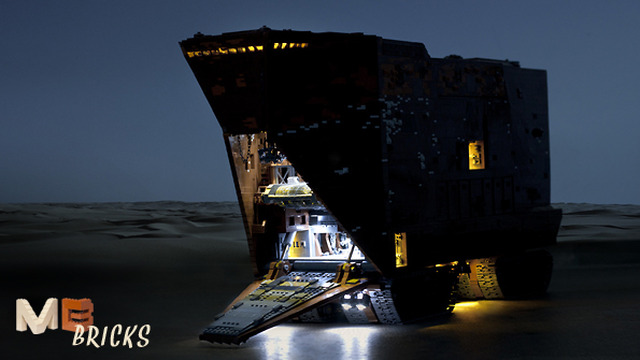 mb_bricks is now two for two in the LEGO CUUSOO community for projects achieving 10000 supporters. If you may remember, the Modular Western Town also accomplished this feat in May 2012. After many months of planning and building and almost a year of being on LEGO CUUSOO, the UCS Sandcrawler is the latest project to hit 10000 supporters. It will now move on to the next stage and the LEGO Jury review it in September. LEGO will now have to create a concept model and hopefully will not change it that much from the original model. One note is that LEGO does already have a licensing agreement with Lucasfilms so that won’t be much of an issue. We’ll have to see how many pieces will be needed to build the Sandcrawler and the cost of it. Maybe it can compete with the Taj Mahal (10189) to see which set can have the most pieces.

Watch the video below to see this behemoth in action and to get a sense of how big it really is. Congratulations again to mb_bricks for this amazing accomplishment on the UCS Sandcrawler.

2012.08.13
Utinni! What a model. It’s huge, incredibly detailed, and it really captures the scale of the Sandcrawler as it was first seen in Episode IV: A New Hope.

What happens now?
This project moves from the Idea stage to the Review stage. A “LEGO Jury” composed of designers, product managers, and other key team members will examine the idea. We’ll build concept models and determine if the concept meets our high standards for what it takes to be a LEGO product. This includes factors such as playability, safety, and fit with the LEGO brand. Every potential LEGO product goes through a process like this and must meet the same standards.

The review is a thorough process and from its start, and can take several months. When finished, we make a “go/no go” decision to develop and sell a product based on the UCS Sandcrawler concept.