LEGO has recently introduced the new Bluetooth enabled Powered Up system which is set to replace the existing Power Functions system. One of the first LEGO sets to use this new system is the LEGO DC Comics Super Heroes App-Controlled Batmobile (76112). The set has 321 pieces and retails for $99.99. The contents of the box include three numbered bags, four loose tires, one Powered Up Hub, two Powered Up motors, and the instructions.

The set comes with an exclusive Batman minifigure which has a very metallic look to him. The front and back of the torso as well as the legs have a lot of armor plating printing. The head has double-sided with one side having a stern expression while the other has an angry expression. His accessories include a Batarang. 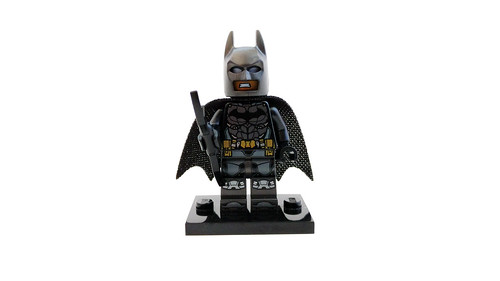 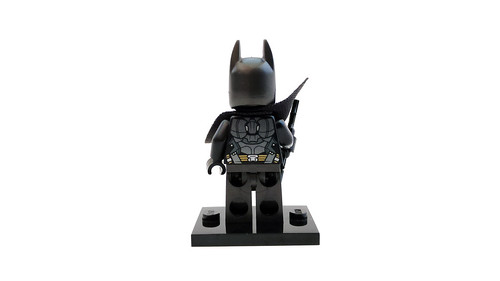 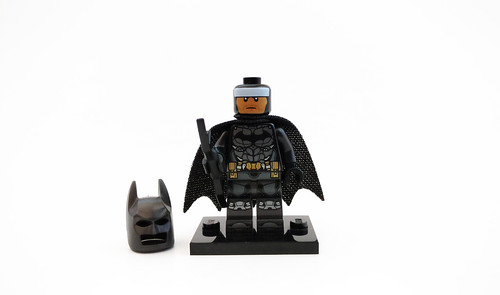 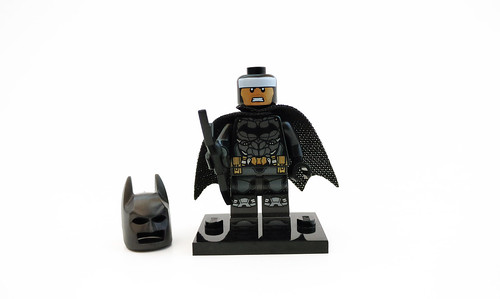 The Batmobile build is very straight-forward. The chassis is Technic-centric with some gears that are connected to the motors for the wheels. Shortly after, a majority of the Technic parts are pretty much covered up with standard bricks. As you’re building, you may think that the motor wires will get in the way but they’re held in place with some brackets. 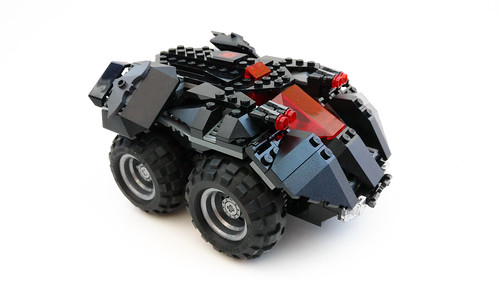 At bag 3, there are some tiles pieces to snugly hold the Powered Up Hub in place. To further hold it in place, there are parts that surround it including a shield piece on the top for the power button. 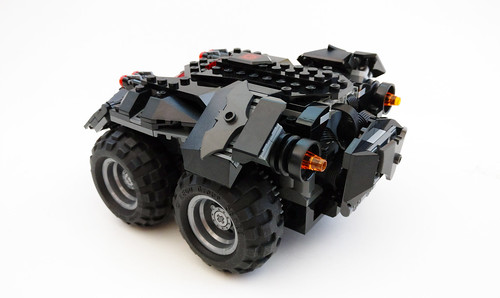 The front cockpit has a very sleek red windshield that is flanked by some stud shooters on either side. That the very front of the Batmobile is a new Batman symbol piece. 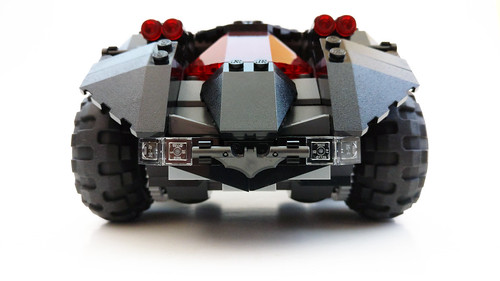 Towards the rear, there are some armor plating for the Batmobile which includes some new Batman symbol pieces. Although it doesn’t say it anywhere but I assume it represents the New 52 version. Below the armor plating are some thrusters on both sides of the vehicle.

On the very back of the Batmobile, there’s a panel that folds down to reveal the cabling for the motors. Although it’s somewhat compact, it’s still somewhat unsightly as the cables bulge out just a bit. 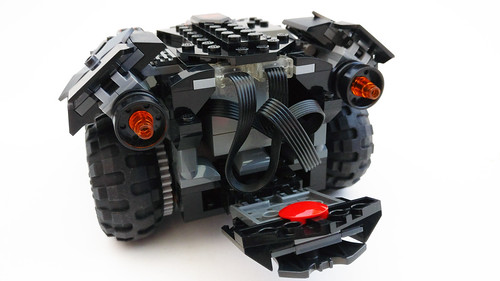 To activate the Batmobile, you’ll have to download the Powered Up app on either Google Play or Apple itunes. When you open the app, you’ll have the option of either choosing the LEGO City Train version or the Batmobile version and that’s what we’ll choose for the purposes of this review. 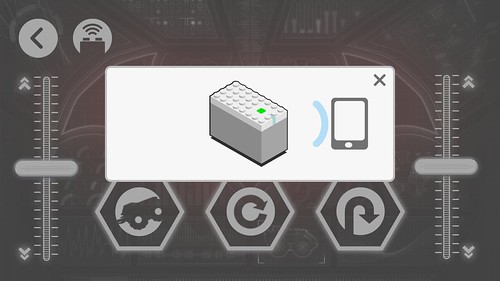 After all of that is done, you’ll have to enable Bluetooth on your smart device to pair up with the Powered Up Hub. You’ll see the lights blink while it takes your device some time to pair up with it. On your screen, you’ll see a percentage bar to track the progress of the pairing. 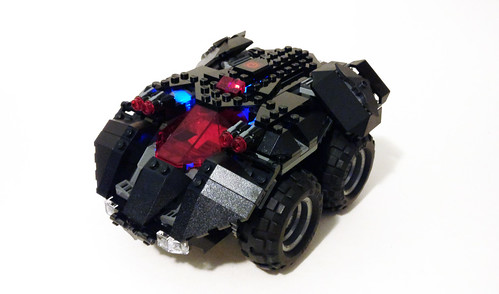 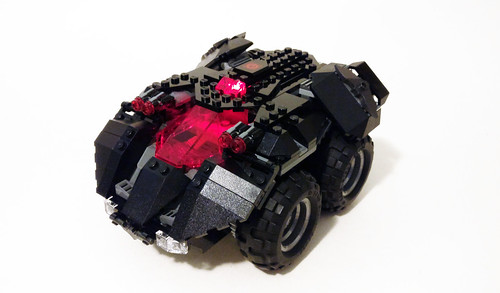 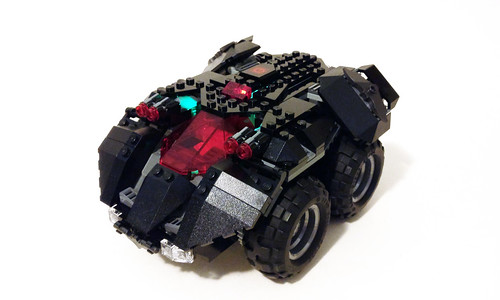 On the main page of the Batmobile side of the app, you’ll have two choice to pick from, red or blue. Each one does the same thing but with some slight differences between the two. The red side has two sliders that powers up the two motors individually. The first option on the bottom of the screen gives the Batmobile a small thrust of speed while the device says “Batman.” The second option turns the Batmobile 90° with a tire peeling off sound. The last option reverses the vehicle with a “Boom” voiceline. 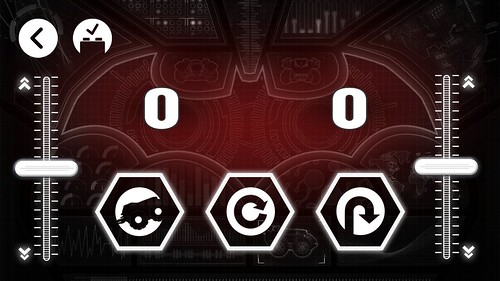 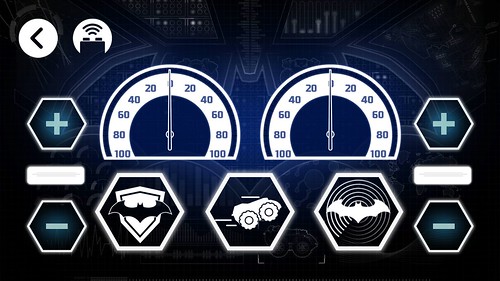 Overall the LEGO DC Comics Super Heroes App-Controlled Batmobile (76112) is an interesting set. The build of it was rather bland but it does have some nice detailing to it. I do like the exclusive Batman minifigure that was included but if you’re a minifigure collector, the price of the set may discourage a purchase just because of the pretty high price point.

The main feature of the Batmobile is when it is paired up with the free app. The Powered Up app connects very fast once it is matched up with the Hub however I’ve had the connection drop a few times while I was playing with it but it only took one press to re-establish the connection. The two version of the Batmobile app gives very distinct play features although I prefer the blue side simply because it gives more power to the vehicle. The Batmobile works on carpet but it works best on smoother surfaces as the rubber tires are pretty grippy and may get caught in the carpet.

The sound effects combined with the various options makes it even more immersive. Hopefully, LEGO updates the Powered Up App regularly to add more options and sounds in the future. 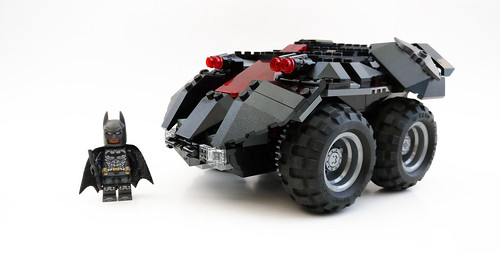