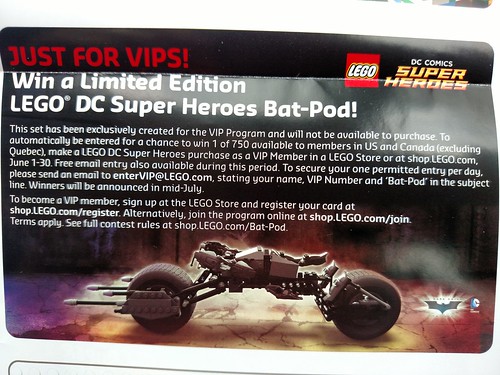 The June 2015 LEGO Store Calendar is already being passed out here and AC Pin over on his Flickr has revealed that there will be a LEGO DC Comics Super Heroes VIP members-only promotion to win 1 of the 750 Limited Edition LEGO DC Super Heroes Bat-Pod (5004590) . The set will not be able to be purchased but you can enter by making a LEGO DC Comics Super Heroes purchase at LEGO Brand Stores and on [email protected] from June 1-30. You can also enter the contest by sending an email to [email protected] and stating your name, VIP Number, and “Bat-Pod” in the subject line. The winners of the 750 Bat-Pod sets will be announced in mid-July.