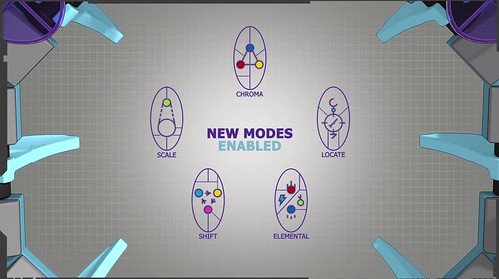 Following the gameplay footage of LEGO Dimensions yesterday at E3, Warner Bros. Interactive Entertainment has released another video today showing off the details of the Toy Pad and how it works in conjunction with the game. The Toy Pad allows a combination of seven different characters, objects, and vehicles to be simultaneously be brought into the game at a single time. It features three distinct areas of RGB light technology that gives a range of colors to provide the players hints and puzzles to solve.

There are five modes available on the Toy Pad: SHIFT, SCALE, CHROMA, ELEMENTAL, and LOCATE. SHIFT mode is activated when characters need to use colored vortexes to move around the area or to avoid danger. The player must physically move the LEGO minifigure to the right colored light section on the Toy Pad which allows them to transport the character to the vortex of their choosing. 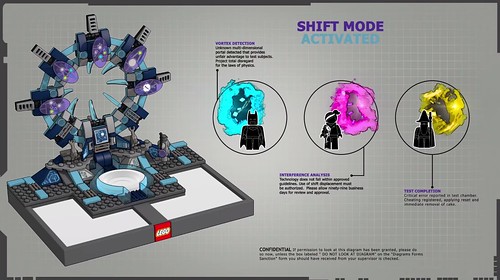 By using SCALE, players can physically place the LEGO minifigure on a distinct colored section of the Toy Pad and they can either grow their character to a larger size or shrink them down to micro-size to be able to compleze puzzles or access new areas. 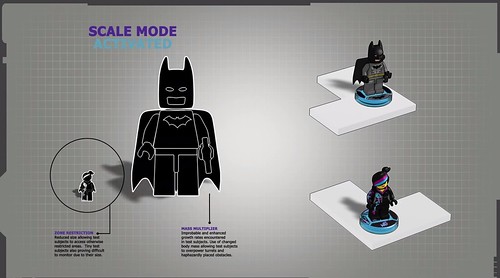 With CHROMA, you change each character into a specific color and you use them at certain points with their respective colors to progress in the puzzle.

For ELEMENTAL, the characters can gain different elemental abilities to use including lightning, fire, water, and wind. You can use those abilities to fight enemies or to use on puzzles.

Finally, LOCATE is seems to be an ability to locate objects in the level.

Warner Bros. has also released official images of various Fun, Level, and Team packs including the Portal Level Pack (71203) which includes the Chell minifigure. Check out the LEGO Dimensions E3 Portal Trailer and the images below.