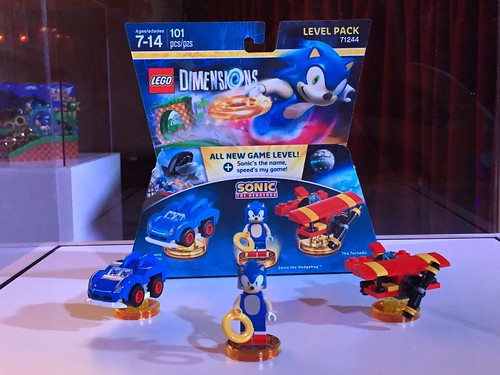 Over at San Diego Comic Con 2016 for Sonic the Hedgehog’s 25th Anniversary Party, TT Games has revealed the new LEGO Dimensions Sonic the Hedgehog Level Pack (71244). The expansion pack includes the Sonic the Hedgehog minifigure, Sonic Speedster, and The Tornado. The level pack will most likely come out in a later wave than the September one and will probably retail for $29.99.

Game Directors Arthur Parsons and James Mcloughlin over on the Twitch stream has teased that more fan favorite characters from the Sonic franchise will be appearing as well but is keeping that a secret for now. There will be a trailer soon so I’ll update this post when it drops.

Update: The official trailer has been released. In the trailer, you can also see Sonic turn into Super Sonic when the seven Chaos Emeralds are collected.