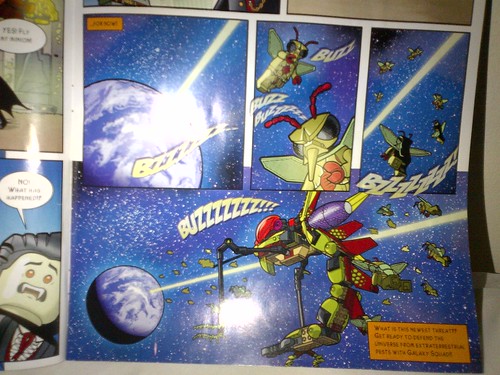 Murphquake has uploaded images from the November-December Club Magazine of what may be the first images of the new highly anticipated LEGO Galaxy Squad sets. What we can see in the comic is Earth shooting a laser into space, probably from the Galaxy Squad, at a giant wasp looking insect as well as many insect figures with the caption:

What is this newest threat?? Get ready to defend the universe from extraterrestrial pests with Galaxy Squad!

vynsane on Eurobricks has found descriptions of the sets and translated them using Google Translator.

70700 Space Swarmer (translation from German: Space Beetles)
The evil alien beetle-like insect buzzing in his space-beetle in the Galaxy! Do not let that captures the robot the Galaxy squad with the mouth parts of the beetle! Help him to escape with his jetpack out of the reach of the sound cannon of the insect! Get yourself to safety, take the space bug to target and turn it off with your blaster! Includes 2 minifigures with weapons: beetle insect-like alien and robot Ages 7 and up.

70701 Swarm Interceptor (translation form German: defensive jet)
A dangerous alien races mosquito zoom on its space plane! Holding that creepy critter on together with the leader of the blue team, Solomon Blaze, and the divisible defense-Jet! If the fight goes out of control, the Abwehrjet the Galaxy squad are divided into 2 machines: an agile flier with removable missiles and a powerful gun turret with camouflaged missiles! Against the divisible Abwehrjet with Solomon Blaze in the cockpit, the alien insects have no chance! Includes 2 minifigures and appropriate weapon: Solomon Blaze and alien mosquito. Ages 7 and up.

70702 Warp Stinger (translation from German: mosquito)
Holding the insect alien on board the Space furchterrregenden mosquitoes! He used the surplus function of the space mosquitoes to attack the heroes of the Galaxy squad. Make the Alien with the leader of the red team, Billy and his Speeder Starbeam harmless! Beware of sticky cocoon-case of space Mosquitoes beware! Exhort from the detachable blaster and try using the robot to free the galaxy from these oversized pests! The space, with its cocoon mosquito trap, the moving wings, the removable bullets and the shooter feature a very dangerous opponent. Includes 3 minifigures and appropriate weapon: Billy Starbeam, robot henchman with Jetpack and alien mosquito with wings. Ages 8 and up.

70703 Space Mantis
The Space Mantis has taken with her nimble grasshopper legs tracking the Galaxy squad teams. Holding onto the space of the Mantis aliens before Solomon Blaze and his blue robots get into his mouth sting! Parts of the vehicle Galaxy squad in an armored car and an agile flier on! Beware of the launcher and the sticky cocoon of space Mantis care! Includes 3 minifigures: Solomon Blaze, blue robot henchman and exclusive red insect Alien From 7 years.

70704 Vermin Vaporizer (translation from German: robot special buggy)
Space Scorpion hastetmit its cocoon behind the green hero of Galaxy Squad! Set to Help the leader of the Green Team, Chuck Stone Breaker and his green robot here, the critter with the ScRobo special laboratory incapacitated! Bring the alien invader in trouble by you split the robot specialized laboratory in a powerful robot and an armored lab! Translate Chuck Stonebreaker in the cockpit of the robot and fire powerful missiles and rockets into the double-Alien! In a special laboratory, you can then examine the alien insect. Includes 3 minifigures: Chuck Stone Breaker, Green Robot and alien insect Í all with matching weapons. Ages 8 and up.

70705 Bug Obliterator (translation from German: Command Shuttle)
Dangerous space dragonfly tries to capture the heroes of the Orange Galaxy squad in a cocoon prison. Fly with the command shuttle and the heroes of the Orange team, Jack and Ashlee StarStrider Fireblade! The vehicle can be a button in a rugged utility vehicle and split a manoeuvrable space ship that brings the insects from the top in distress! Exhort from the camouflaged missiles and laser cannons to repel these alien creatures! Includes 3 minifigures: Jack Fireblade, Ashlee StarStrider and alien insect with wings, weapons and cocoon. Ages 8 and up.

There is an image of a few of the Wave 1 sets but they are stamped “Confidential” so we won’t post them here. You can probably find them floating around online.