Just2Good over on Eurobricks has found out that LEGO will be part of a licensing agreement to produce sets for the upcoming Ghostbusters reboot movie featuring the all-female cast. There was no mentioning on what will be coming out but I assume it be various scenes from the movie like they usually do with movie tie-in sets.

This report was from a few days ago but the whole LEGO Ghostbusters theme is not without controversy. Yesterday, one of the creators of the Ghostbusters Firehouse on LEGO Ideas posted a statement regarding the similarities between their project and the official Ghostbusters Firehouse Headquarters (75827). I shared that post on Facebook and there was mixed reaction.

Anyways, Ghostbusters will be released in July 2016 so we can probably expect sets between May and July. 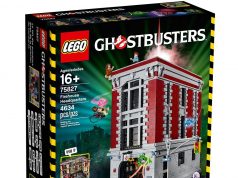