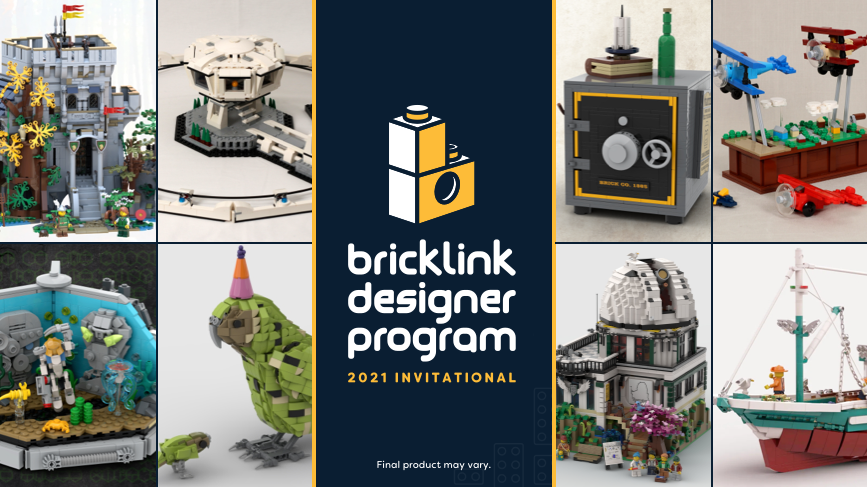 LEGO just finished a roundtable regarding the BrickLink Designer Program regarding some of the concerns from the initial launch last week. There was massive traffic to BrickLink compared to Black Friday shopping. In fact, somehow there were actually 10,000 Castle in the Forest sets sold when there was originally a limit of 5,000 total pre-orders per project. As a result, LEGO/BrickLink will allow the other projects to also reach 10,000 pre-orders as well. The first round of crowdfunding will reopen again on August 3 to allow that to happen. The Castle will not reopen for pre-orders since it already reach 10k pre-orders already. This will in turn push the dates of the next crowdfunding rounds back even further.

There will now be a limit of one pre-order per person to allow more fans to get their hands on the sets. If you saw, resellers were selling the Castle in the Forest for about $800 after it was the first set to sell out. LEGO has also taken action against resellers on eBay to not allow scalpers to profit from it.

As far as designs and pricing for the next projects not mentioned in the press release below, LEGO may reveal them a bit early give buyers details of them before crowdfunding starts.

Read more about LEGO/BrickLink’s response to the feedback regarding the first round of crowdfunding on the BrickLink Designer Program.

Thank you for the incredible interest you showed in the BrickLink Designer Program. We have been blown away by the response. As with any new endeavor, some things went well, and others don’t go to plan.

Based on our first round of crowdfunding, we believe the BrickLink Designer Program has strong potential. Your interest exceeds all our expectations. The portfolio of products is strong, and the designers are a joy to work with. We are looking forward to preparing for rounds 2 and 3.

However, there are a few things we need to address urgently with Round 1.

What needs to be improved

Thank you to everyone who has shared comments and feedback with us over the past week. While we understand many of you are frustrated, we are grateful for your quick and clear input.

There are four areas we want to address:

When the crowdfunding went live on Thursday July 1 traffic to the site overloaded BrickLink’s servers. This meant some users couldn’t place their orders in time and for many, the site ground to a halt. We apologize for any disappointment this caused. We are currently reviewing server capacity.

The limit of 5,000 units per set was based on the AFOL Designer Program run in 2019. For that release, we produced 2,500 sets which didn’t all sell out. We obviously underestimated the appeal of the Bricklink Designer Program sets and because of that, we will double the limit for future releases.

The high level of demand was compounded by the site performance issues. An ordering glitch meant that people were able to pre-order 5,000 additional Castle in the Forest sets, which means we’ve received orders for 10,000 sets.

We have talked to many of you in the community about how to address this and have decided on the following actions:

1. Produce 10,000 of the Castle in the Forest sets so we can deliver to everyone who ordered.

2. Re-opening pre-ordering for round 1 on August 3rd to allow the four projects Kakapo, Great Fishing Boat, Sheriff’s Safe and Pursuit of Flight to also sell up to 10,000 sets.

3. Increase production for Crowdfunding rounds 2 and 3 to 10,000 each to meet demand.

We appreciate that this approach may not satisfy everyone, but we had to balance meeting users’ expectations with offering a fair outcome, so all designers had the chance to sell the same number of sets and the potential to dilute some of the exclusivity that comes with doubling the number of set available. We hope you understand.

Increasing production will delay shipping and future rounds of crowdfunding. Since we are doubling the production run, the additional 5,000 sets for Round 1 will be shipped in June 2022, as opposed to January 2022. This will also delay the release of Rounds 2 & 3. The final plan for this will be communicated at a later stage.

If, because of these changes, you wish to cancel the sets you’ve pre-ordered, please contact LEGO Customer Service.

Order limits of five per customer

We initially set the maximum order quantity at five per customer. Unfortunately, we saw a very small number of opportunistic customers hoarding sets and re-selling them for inflated prices. We’re disappointed by this as it wasn’t our intention to enable such behavior. We want everyone to have an opportunity to get a hold of a set, so going forward, we will set a maximum order limit of 1 set per customer. This will apply from when we re-open Round 1 to additional orders and to future crowdfunding rounds.

It’s important to point out that 75% of orders for Castle in the Forest were for one set– so we’d like to thank you for being considerate of other fans.

We have decided to sell BrickLink Designer Program sets through the LEGO.com shop to give you a smooth shipping and support process. Unfortunately, this also limits the countries to which we can ship. For now, we plan to continue to use LEGO.com and not offer additional shipping destinations.

1. For Round 1, we will increase the number of sets available from 5,000 to 10,000. Castle in the Forest has already reached this amount. The four other sets will re-open to additional pre-ordering on August 3rd, but it will not be possible to pre-order additional Castle in the
Forest sets. The additional production run will delay in shipping and release dates for crowdfunding rounds 2 and 3.

2. All future pre-orders will have a quantity limit of 1.

3. Unfortunately, in the current LEGO.com setup we are not able to ship to additional countries.

Again, we apologize for any disappointment and hope that the steps outlined above go some way to address the concerns raised.

Thank you for your patience, feedback and support for the BrickLink Designer Program. We look forward to building a better experience moving forward.