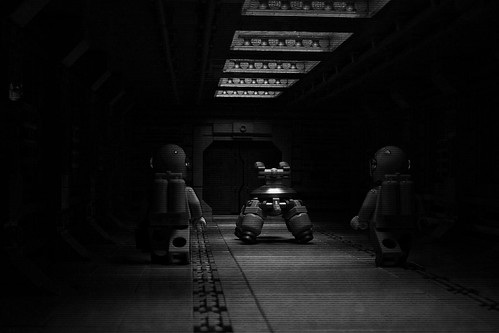 The next part of what appears to be the countdown to revealing the LEGO Ideas Exo Suit (21109) has appeared online and this part even includes a video to go along with it. The image and video shows a couple members of Salvage Team Alpha Zero Nine with a little turtle-looking robot responding to a distress call. The message also mentions of heavily-armed beings outside of where the team is located and they can’t “outrun them on foot.” What if they could outrun them riding the Exo Suit? Hmmmm. As the video fades out, you can also see the LEGO Ideas logo in the static.

From what we’ve seen so far, the Exo Suit (21109) set will have something to do with the Classic Space theme and it may include numerous minifigures. Anticipation is brewing and these short teasers are an awesome marketing tactic by everything that’s involved with the project. I can’t wait to see what’s in store for the Salvage Team behind those doors.