The Particle Accelerator project by JK Brickworks is the latest one to achieve 10,000 supporters on LEGO Ideas. If creator’s name sounds familiar, that’s because his Labyrinth Marble Maze (21305) will be released in April.

The particle accelerator is based on the real life machine that uses electromagnetic fields to propel charged particles to contain them in defined beams. The most well known one is the Large Hadron Collider built by CERN. For the LEGO version, it basically demonstrates the concept by using LEGO balls that spin around the ring. Check out how it works in the video below.

The project now joins the Fossil Museum, the Gingerbread House, the Modular Train Station, the Old Fishing Store, and the Jedi High Council as the ones that qualify for the First 2016 Review Stage. 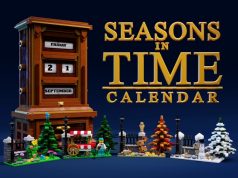