As we get closer to May 1st when all the new LEGO Jurassic World sets will be available, companies are starting to add the products to their websites. Toys R Us is the first US site, that I know of, to do so with the Indominus Rex Breakout (75919). We get some clearer official images of the set as well as the set description for the set.

I’ll keep this post updated with the other sets as soon as they become available online.

Watch out! The mobile vet unit is under attack from Blue and Charlie, two marauding raptors. Drive the powerful vehicle at top speed to evade their charges. Join Owen on the motorbike to distract the dinosaurs and lure them away with the flare. Fire the rotating rooftop shooter to repel the raptors and put them to sleep with the ACU trooper’s tranquilizer gun. Includes 3 minifigures with a weapon and assorted accessories: an ACU trooper, Owen and Claire.

The chase is on! A mighty T. rex has broken loose and it must be captured before it harms anyone. Team up with the ACU troopers in the T. rex Tracker to pursue the ferocious creature. Drive the motorcycle to distract the T. rex, swerving clear of its powerful jaws. Meanwhile, lay out the dino cage as a trap and prepare to fire the mobile research module’s harpoon-style trap shooter. You’ve only got one shot to take down the beast, so make it count! Includes 3 minifigures with assorted weapons and accessories: an ACU trooper, Hoskins and a vet.

Red alert – the huge Indominus rex™ has broken out of the impound! Zach is inside the gyrosphere launched from the pen wall and now he’s under attack. Direct the hunt for the rampaging beast from the impound’s research tower. Set off in hot pursuit in the helicopter, evading the dinosaur’s snapping jaws and swiping claws. You must get that dangerous dino safely back in the pen before it causes serious damage. Includes 4 minifigures with assorted weapons and accessories: Zach, an ACU trooper, Dr Wu and a vet. 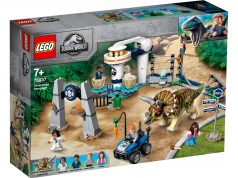 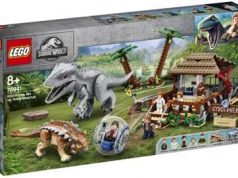 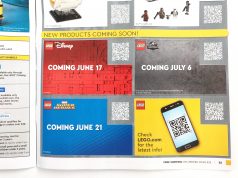