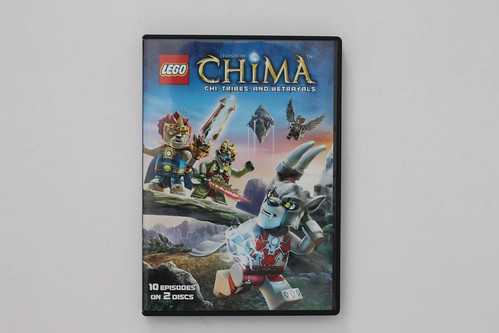 A few days ago, I was contacted by a representative from Warner Bros. Home Entertainment and I was sent a review DVD copy of the upcoming LEGO Legends of Chima: CHI, Tribes, and Betrayals Season 1 Part 2. The DVD includes the second half of Season One of the animated TV show and continues from the first half of season DVD set named The Lion, the Crocodile, and the Power of CHI!

. CHI, Tribes, and Betryals consists of the last 10 episodes of Season One and is also split into two DVDs. The first disc has Lennox printed on the disc while the other has Winzar printed on it. The total runtime of all the episodes is 220 minutes. The languages available are English, French, and Spanish with subtitles in English and French only. 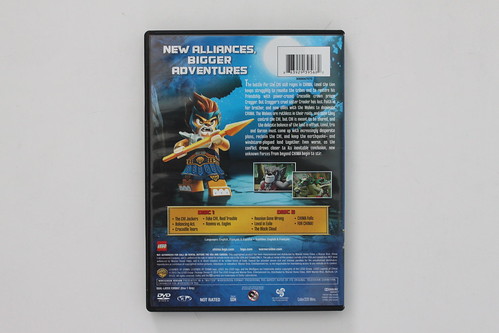 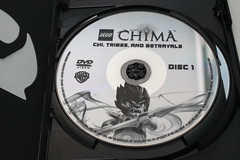 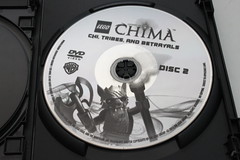 The battle for the Chi still rages in Chima. Laval the Lion keeps struggling to reunite the tribes and to restore his friendship with power-crazed Crocodile crown prince Cragger. But Cragger’s cruel sister Crooler has lost faith in her brother, and now allies with the Wolves to dominate Chima. The Wolves are ruthless in their raids, and soon they control the Chi, but Chis meant to be shared, and the delicate balance of the land is offset. Laval, Eris and Gorzan must come up with increasingly desperate plans, reclaim the Chi, and keep the earthquake – and windstorm-plagued land together. Even worse, as the conflict draws closer to its inevitable conclusion, new unknown forces from beyond Chima begin to stir.

As mentioned earlier, the last 10 episodes of Season 1 are split between the two DVDs each with 5 episodes. The first disc includes: The CHI Jackers, Balancing Act, Crocodile Tears, Fake CHI, Real Trouble, and Ravens vs. Eagles. The second disc has Reunion Gone Wrong, Laval in Exile, The Black Cloud, CHIMA Falls, and FOR CHIMA! There may be some spoilers below for the descriptions of the episodes below.

The Wolf Tribe is “jacking” everyone’s CHI which throws the world of Chima out of balance and causing strange earthquakes.

Members of the Eagle Tribe including, Eris and Eglor are helping the Lion Tribe to deliver CHI to the other tribes but Laval and Eris get into some trouble a short time later.

A few of the Crocs are captured and kept as prisoners by the Wolf Tribe. The tribal elders discuss on whether to rescue the Crocs or not but Laval and Eris divises a way to release the Crocs.

The Wolf Tribe is still stealing CHI. Cragger wants to do something friendly for all the tribes of Chima but Crooler, up to her devious ways, thinks of a plan.

Laval and Cragger are now friends again and Crooler wants to get her Persuader Plants to bloom again. Meanwhile, Razar learns that nobody in the Eagle Tribe has any personal property and raid the Eagle Spire.

All the tribes in Chima are preparing to sign a treaty to never fight again but Crooler creates a Fog of Destiny.

Laval accepts his punishment and has been exiled and Cragger has captured Lagravis.

A strange Black Cloud has appeared around Mount Cavora threatening the source of CHI.

After the battle with the Black Cloud, the CHI Falls now runs dry and the Crocodile Tribe is rallying other tribes to get the last of the CHI.

The Crocodile, Wolf, Raven, and Rhino Tribes are ascending on the Lion Temple and there is a battle and a character makes their return.

You can now now pre-order your own copy of LEGO Legends of Chima: CHI, Tribes, and Betrayals at WBShop.com and on Amazon

and it will be released July 15th. However, Warner Bros. Home Entertainment was kind enough to provide five (5) copies of the DVD for a contest. Like with our previous contests, we’ll be using Rafflecopter as our platform since it’s easy to use. The contest runs through July 15th and is open to the United States only. Winners will be contacted by the email provided.