ToyFair 2012 in London finally reveals the LEGO Lord of the Rings sets coming out Summer 2012. 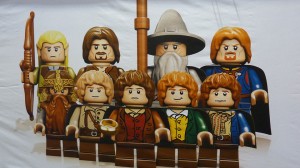 Gandalf Arrives (9469)
The smallest of the Lord of the Rings sets coming in at 83 pieces. It consists of Frodo and of course Gandalf. The set reenacts the scene where Gandalf arrives in Hobbiton. There is a cart and fireworks included.

Shelob Attacks (9470)
This set recreates the scene where Gollum leads Frodo and Sam to Shelob’s lair and where the Hobbits battle the giant spider. Minifigs include all the before mentioned and accessories. “Shelob Attacks” consists of 227 pieces.

Uruk-Hai Army (9471)
This is pretty much like the Star Wars Battle Packs but much larger. This 257 piece set is a great way to build up your orc army. Another feature of the “Uruk-Hai Army” set is that it looks like it will connect to The Battle of Helm’s Deep set. The minifigs included will be 4 Uruk-Hai orcs and 2 Rohirrim soldiers, one of which will probably be Eomer.

Attack on Weathertop (9472)
Attack On Weathertop will be one of the larger sets of the Lord of the Rings series containing 430 pieces and has 5 minifigs, Frodo, Aragorn, Merry, two Nazgul (Ringwraiths). Weathertop is a pretty small structure but looks like the on the one in the movie. It has a neat spiral staircase to runs to the top.

The Mines of Moria (9473)
As we move up to the larger sets of the series, this 776 piece set is minifig heavy. The Mines of Moria comes with many members of the Fellowship including, Pippin, Gimli, Legolas, and Boromir. There will also be two goblins, a cave troll, and two skeletons. This set will depict the scene where the Fellowship enters the Chamber of Mazarbul and are attacked by the cave troll and the goblins.

Battle of Helm’s Deep (9474)
For the Battle of Helm’s Deep, we get a castle! This 1368 piece set is the largest of the Lord of the Rings series coming out this summer. It has a total of 9 minifigs including Aragorn, Gimli, Haldir, Theoden and 5 Uruk-Hai orcs. The castle pieces are great for MOC builders.

The Orc Forge (9476)
There’s not much information about The Orc Forge other than it consists of 5 orcs and various metalworking tools and weapons.