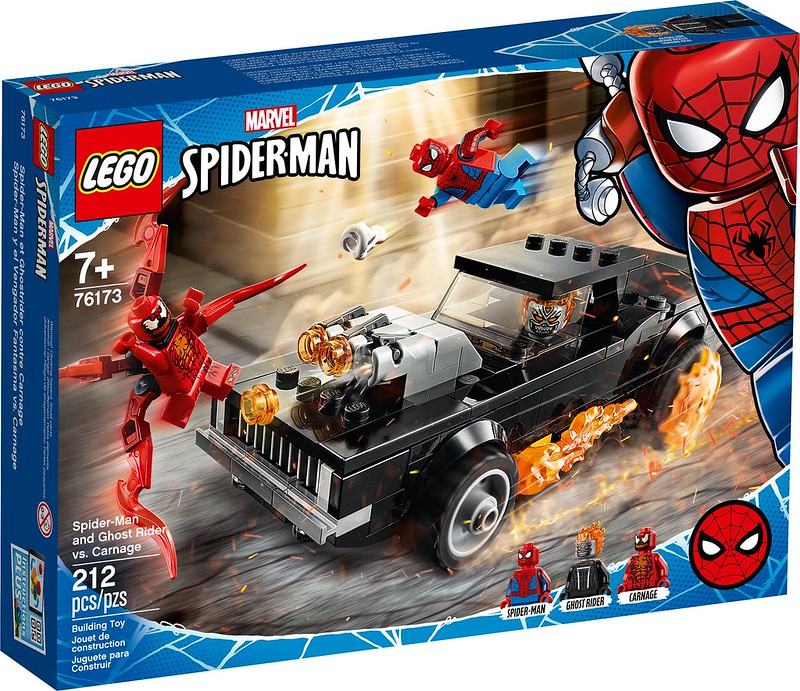 LEGO has revealed some new 2021 LEGO Marvel Super Heroes sets on the LEGO Shop. Continuing for next year are some mech armor sets featuring new Marvel characters. There are also some regular sets which feature Ghost Rider and Carnage.

A hands-on treat for young superheroes

The Captain America minifigure battles enemies with help from his indestructible shield. When extra size and strength are needed, kids can put him into the cockpit of the mighty mech. With movable arms and legs and a giant shield gripped tight in the mech’s powerful hands, budding Marvel Avengers can battle bad guys, relive favorite movie scenes and take on other mechs in the LEGO Marvel collection. 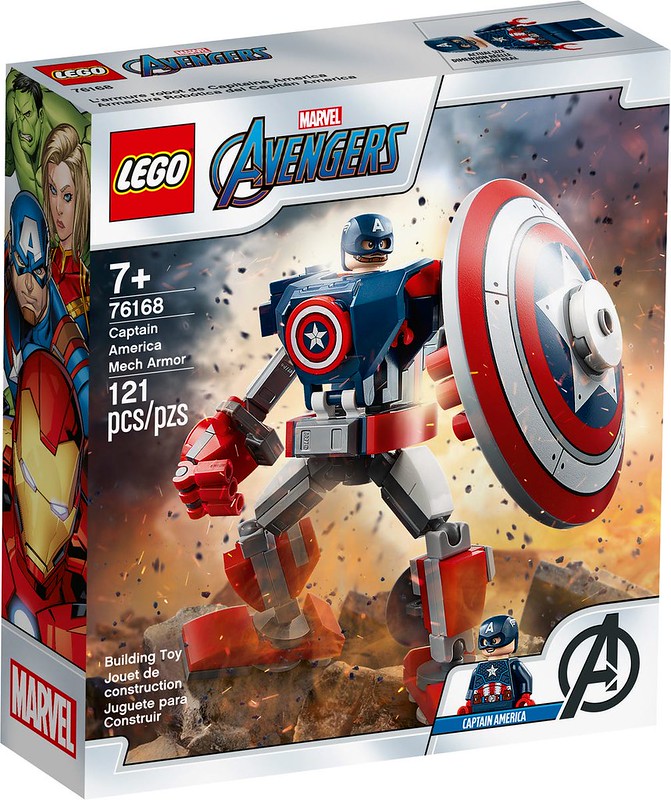 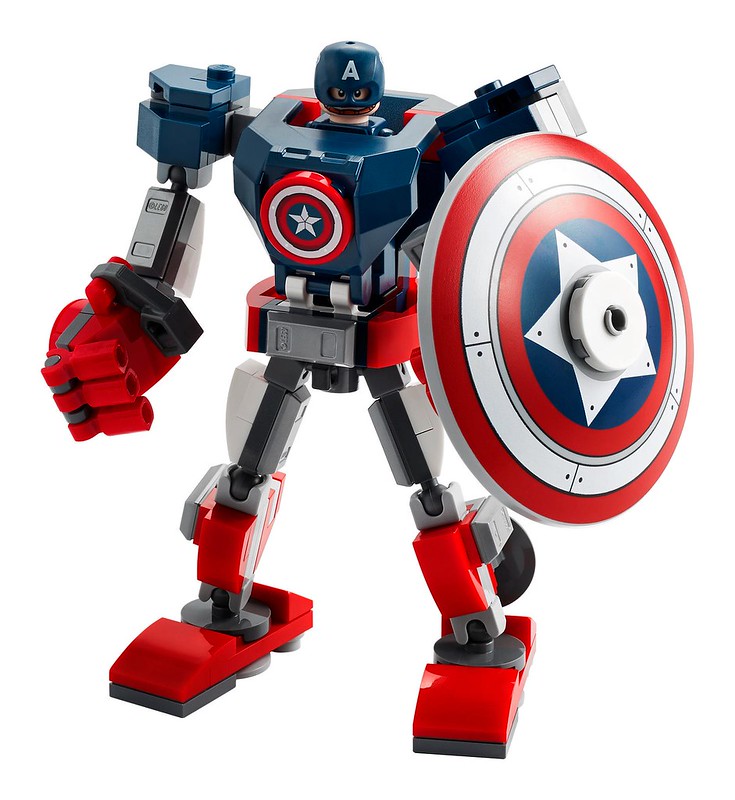 A mega gift for Marvel fans

Kids use the Thor minifigure to take on enemies, with help from his mystical hammer, then supersize the mighty warrior by putting him in the cockpit of the giant mech. The mech has movable arms and legs and a giant hammer gripped tight in its powerful hands, so Marvel Avengers fans can use it to recreate favorite movie scenes and have epic battles with other mechs in their collection.

• Supersize the superhero action with the mighty, LEGO® Marvel Avengers Classic Thor Mech Armor (76169) to give any budding superhero a hands-on treat.
• Includes a Thor minifigure, a buildable mech with a large hammer that fits in its gripping hand, plus a smaller hammer for the minifigure that also attaches to the mech’s leg.
• Kids can put the Thor minifigure into the mech’s opening cockpit, then use the movable mech and its super-sized hammer to role-play epic battles with a whole universe of bad guys. 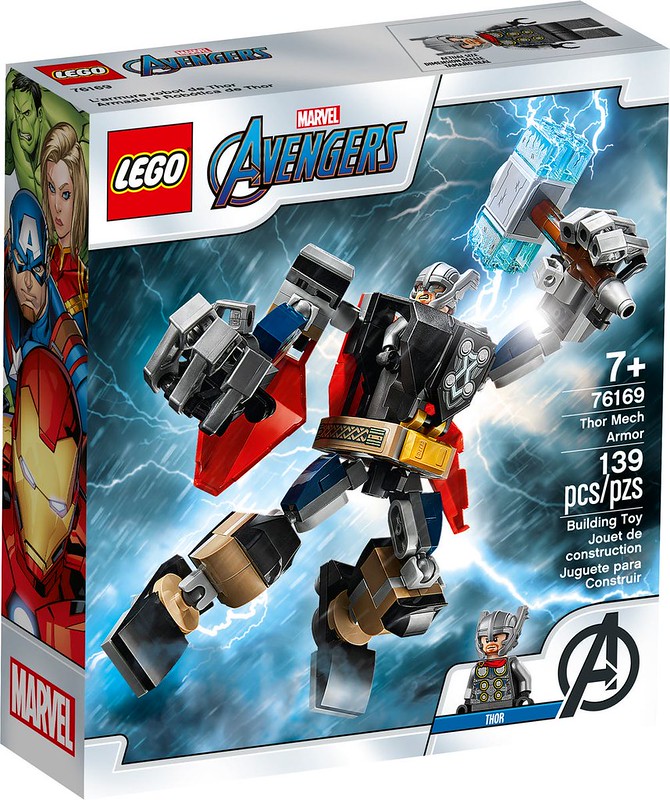 This versatile superhero gift partners kids with Miles Morales – the Spider-Man with the electric-shock webs – for endless adventures battling super villains and saving the world. Whenever more size and power is required, kids place the Miles Morales minifigure into the cockpit of his mighty mech. The movable mech’s super-sized electro-web is the perfect way for kids to zap villains as they relive favorite movie scenes and battle other mechs in their collection. For extra fun, the downloadable LEGO Building Instructions app includes digital Instructions PLUS, which allows kids to zoom, rotate and visualize their playset as they build.

• A hands-on treat for young superheroes, LEGO® Marvel Spider-Man Miles Morales Mech Armor (76171) scales up the superhero adventures with movable limbs and extra-long electro-web to zap the bad guys.
• Includes a Miles Morales minifigure and buildable mech, a large web that fits in the hands of both the mech and the minifigure, plus smaller webs that attach to the mech’s legs and elsewhere.
• When kids place the minifigure into the cockpit of the super-sized, movable mech, they can relive favorite movie scenes, create their own adventures and battle other mechs in their collection. 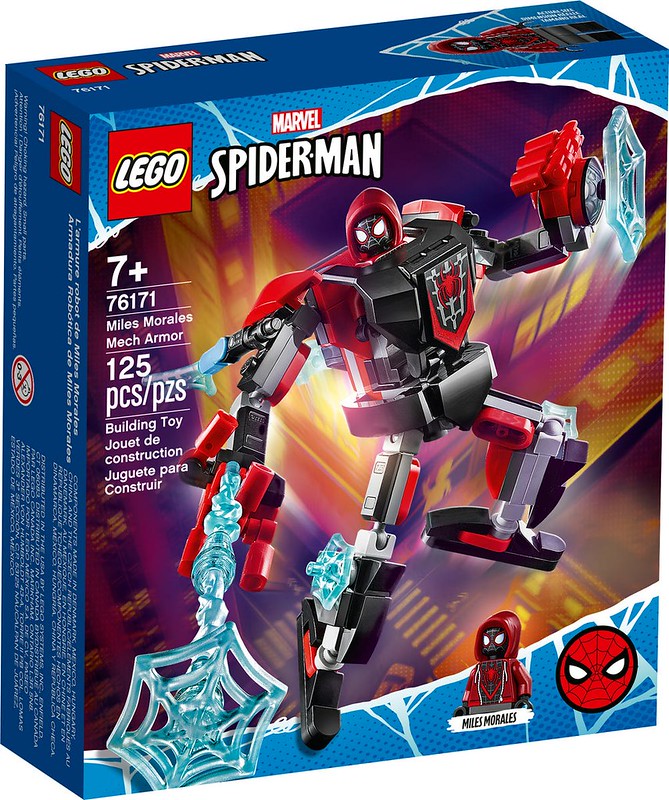 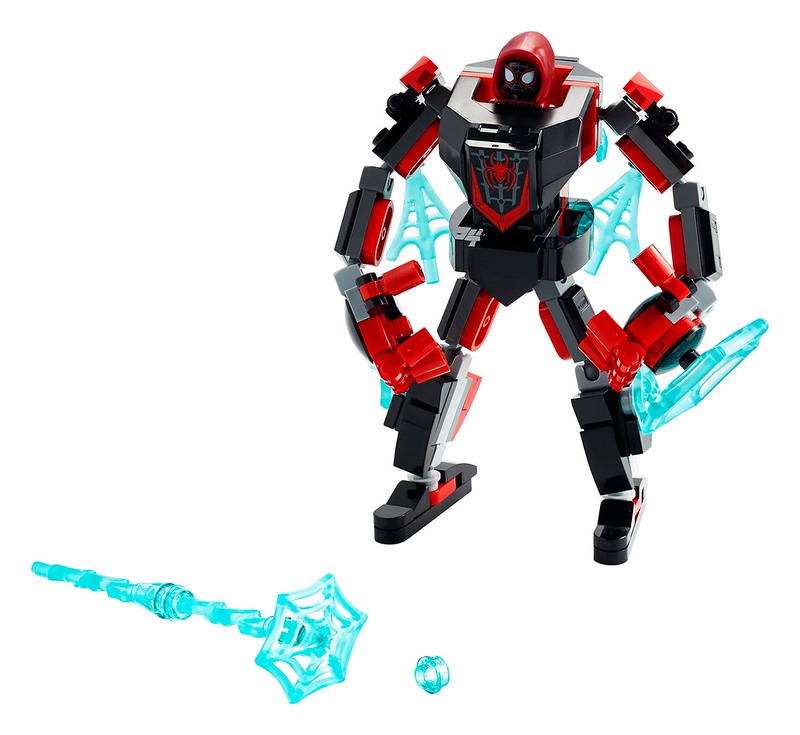 LEGO® Marvel Spider-Man: Spider-Man and Sandman Showdown (76172) is a super-fun, super-quality playset for budding superheroes. Designed especially for ages 4 and up, it encourages shared play and delivers developmental benefits.

The best start for growing minds

Surprise a young superhero with this LEGO 4+ set and introduce them to non-stop imaginative fun. A special Starter Brick chassis helps youngsters get started and discover the joy of constructing something “by myself”. The included simple guide to building and playing helps them (and their grown-up helpers) develop creative construction skills. For more building fun, the downloadable LEGO Building Instructions app includes digital Instructions PLUS, which allows kids to zoom, rotate and visualize their playset as they build.

Fun for all the family

A LEGO 4+ playset is a treat for toddlers and parents alike. While adults pass on their construction skills, they share precious developmental milestones with their budding builder.

• LEGO® Marvel Spider-Man: Spider-Man and Sandman Showdown (76172) is a superhero treat designed to develop the imagination, dexterity and building confidence of youngsters aged 4 and up.
• Includes Spider-Man and Sandman minifigures, a sturdy spider-buggy, a sand catapult for kids to shoot and fun accessories from the superhero movies.
• Kids (and their friends) help Spider-Man stop super villain Sandman stirring up a sand tornado, then go on to recreate movie scenes and dream up endless superhero adventures of their own. 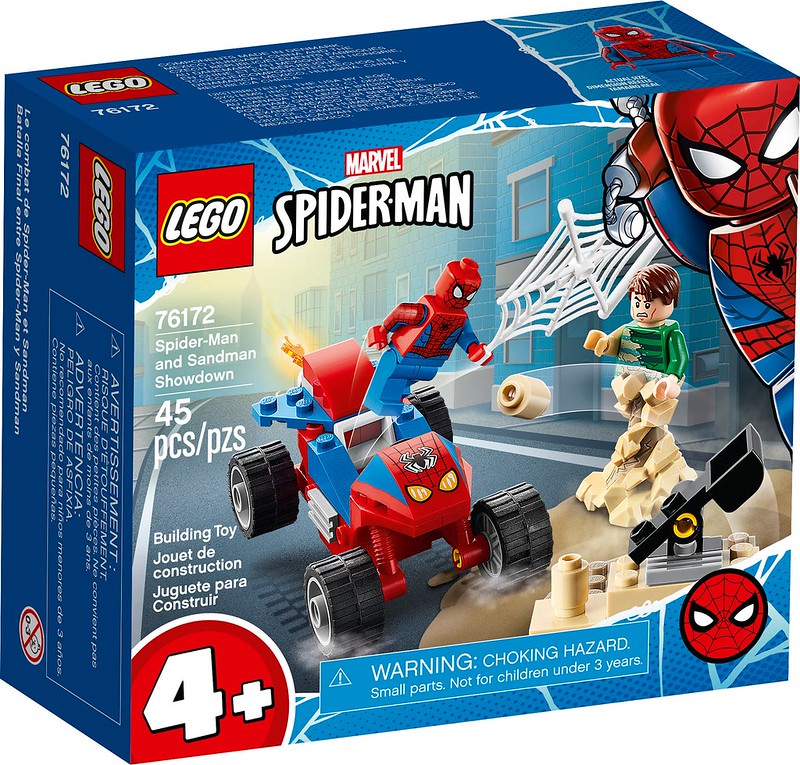 Young superheroes are in for non-stop, red-hot action and adventure when teenage web-slinger Spider-Man and super villain Carnage come together with walking-inferno Ghost Rider and his flame-covered, 3-stud shooter supercharger-equipped car. This fun-packed playset will provide kids with endless excitement and entertainment as they build, play out and display scenes with the thrilling trio. For extra creative fun, the downloadable LEGO Building Instructions app includes digital Instructions PLUS, which allows kids to zoom, rotate and visualize their playset as they build. 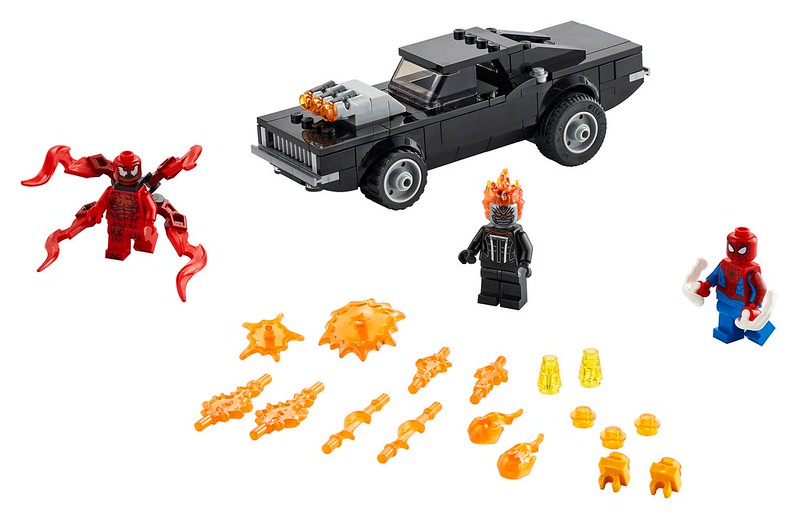 With 4 iconic Marvel characters and an awesome monster truck, LEGO® Marvel Spider-Man: Spider-Man’s Monster Truck vs. Mysterio (76174) is a stand-out gift that will delight any young superhero.

A unique mix of superhero action

Kids who are into superheroes and super-vehicles will love this LEGO Marvel mega-set. With classic characters Spider-Man, Spider-Gwen, Doctor Octopus and Mysterio, and featuring a big, tough monster truck with working suspension and a net launcher, plus 2 armed drones – the scene is set for imaginative adventures that never end. The fun continues even when the action stops, as kids put the cool scenes they’ve created on display in their room. For extra creative fun, the free LEGO Building Instructions app includes digital Instructions PLUS, which allows kids to zoom, rotate and visualize as they build.

• LEGO® Marvel Spider-Man: Spider-Man’s Monster Truck vs. Mysterio (76174) brings together 4 favorite characters from the Spider-Man movies and an almighty monster truck for spectacular superhero action and adventures.
• Includes Spider-Man, Doctor Octopus, Mysterio and Spider-Gwen minifigures, a monster truck with super-suspension and roof-top net launcher, plus 2 buildable drones, each with 2 shooters. 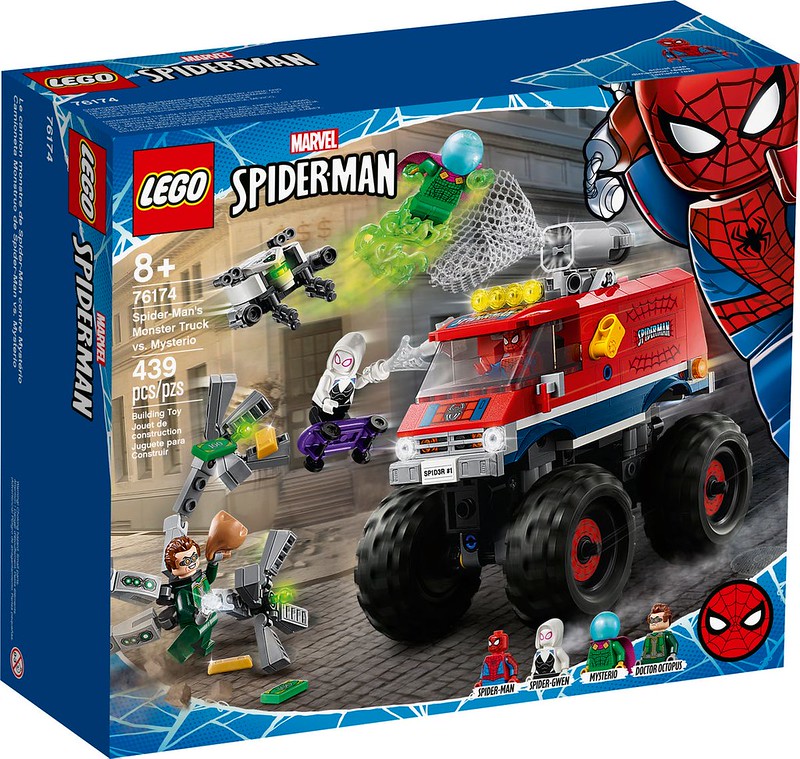 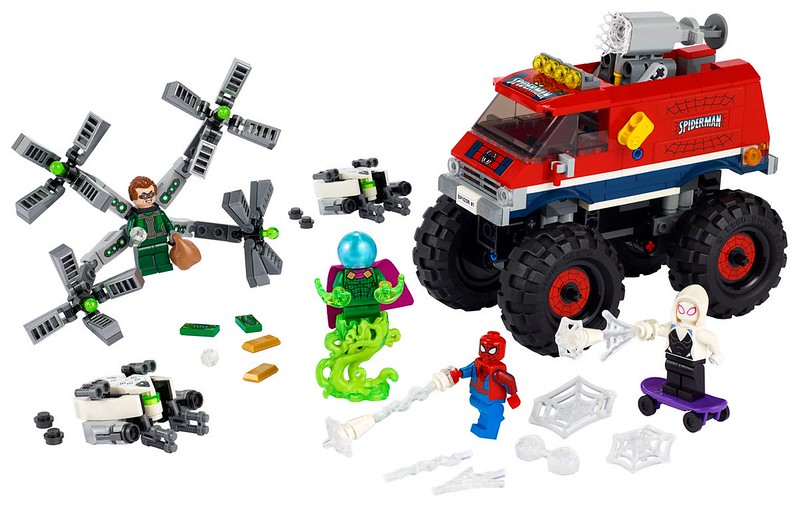