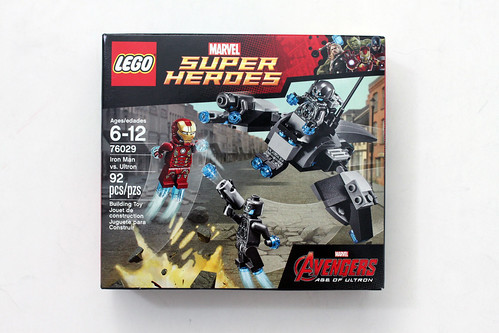 Today we have a review of one of the new LEGO Marvel Super Heroes Avengers: Age of Ultron sets, Iron Man vs. Ultron (76029). The set contains 90 pieces and retails for $12.99 which is about $0.14/piece. The contents of the box include two polybags and a small instructions booklet. 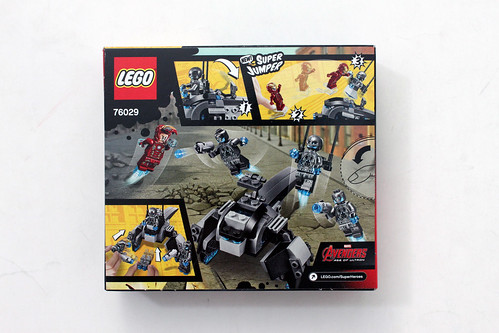 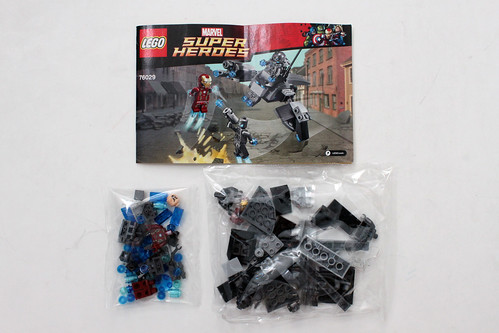 The first minifigure in the set is, of course, Iron Man himself. LEGO lists Tony Stark wearing the MK 45 “Bleeding Edge” suit which is exclusive to this set. The new torso is mainly a slightly darker red than the previous Iron Man minifigures that have been released before. There is also a lighter shade of red with some gold printing throughout the torso and legs. The helmet is also similar to previous ones except for the slight coloring difference. The Tony Stark head is the same double-sided one that’s been used before. His accessories include some trans-light blue studs and and round bricks to simulate the suit’s thrusters. 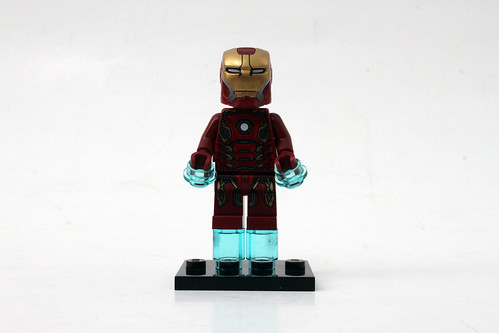 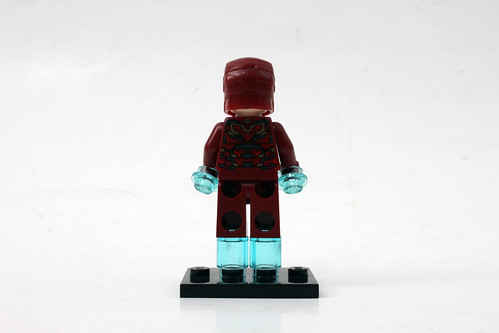 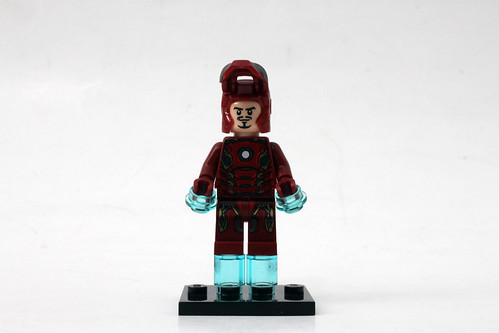 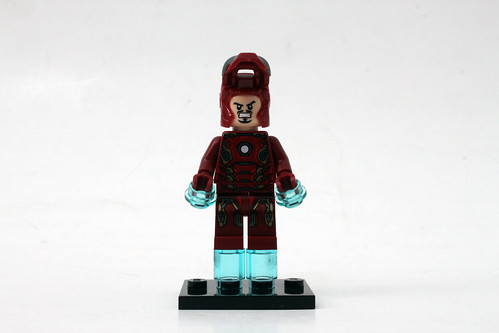 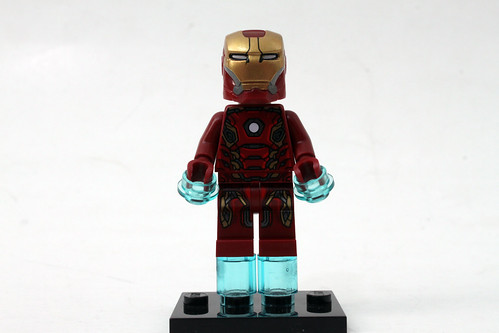 The next minifigure is the Ultron Sentry Officer. The main coloring on the minifigure is dark gray with some very nice robotic detailing on both the front and back of the torso as well as on the front of the legs. The head also has some great printing but you can’t really see it because of the helmet piece that it wears which is also new. Its accessories include trans-dark blue studs for the thrusters as well as some sort of attachment on the back. It’s connected by the new clear neck brace piece. 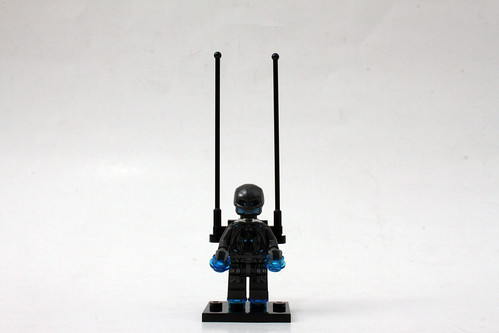 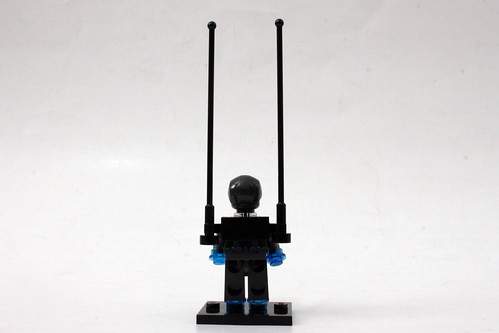 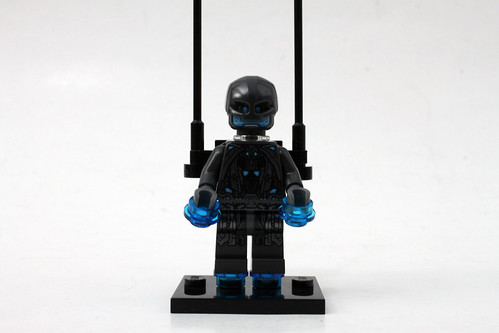 The last minifigures are the regular Ultron Sentry units. Like the other minifigures in this set, these are also exclusive. They’re basically the exact same minifigure as the Sentry Officer minus the back attachment and helmet. However these two have stud shooters as their accessory. 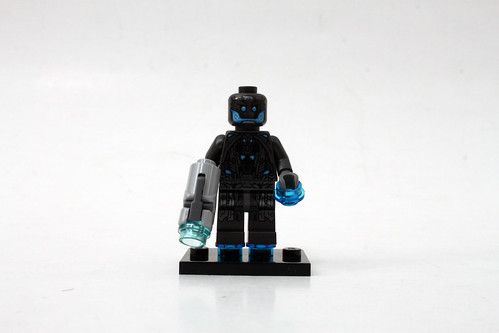 The build itself is some sort of glider that we might be seeing in the movie. I say that because of the Iron Man vs. The Mandarin Ultimate Showdown (76008)

from Iron Man 3 which never happened in the movie so it’s hard to say whether this aircraft will be in Age of Ultron or not.

What’s interesting about it is that it incorporates the Ultron Sentry Officer and the two Sentry drones into the build. The torso of the Officer is attached to a slope piece and held down with a hinged modified plate piece. The legs for it are attached to the front part of the vehicle. The torso for the two Sentry drones are attached to the wing pieces while the legs are on the back side to resemble some sort of engines. The long tail pieces are somewhat awkward as well well.

The play feature of the set is to use the included Super Jumper piece to launch Iron Man at the Sentry Officer to knock him off. As a warning, there have been reports that the Super Jumpers in the 2015 Super Heroes sets are getting stuck to the minifigure legs and damaging them. 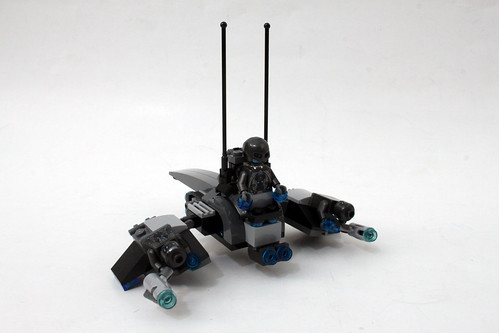 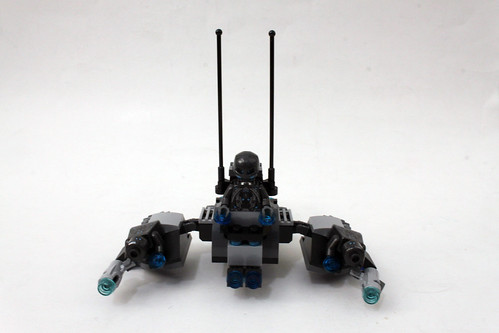 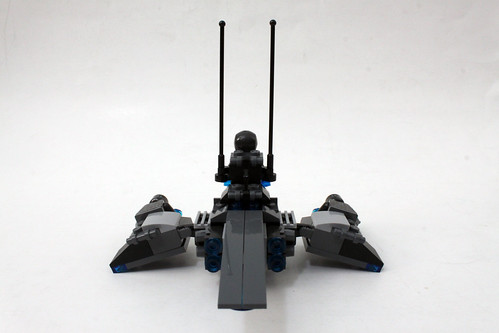 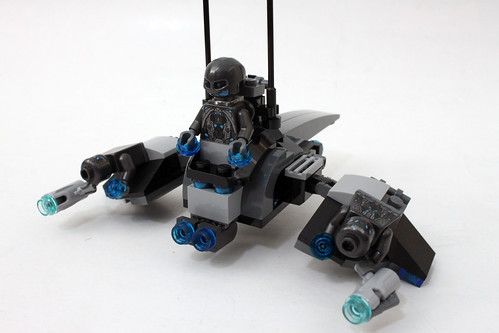 Overall, I feel this set is rather weak mainly because of the actual vehicle build. The main draw are actually the minifigures and as stated before, all four minifigurs are exclusive to this set. I’m not sure why the set is called Iron Man vs. Ultron (76029) because with a set name like that, you would think that the actual Ultron minifigure would be included instead of his minions.

The build itself is very lackluster and it may seem that this is one of those throw-in sets that doesn’t actually appear in the actual movie, similar to the Iron Man 3. This set would actually make a great army builder of Ultron drones to replicate what was shown in the trailer. The grading scale below is kind of skewed mainly because of how great the minifigures are which brought up the overall score. 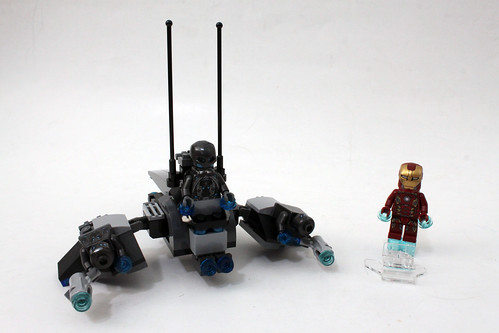