The official images of the LEGO Marvel Super Heroes Avengers: Infinity War sets are now available for our eyes to gaze upon. There are six sets in the wave and we’ve already seen a few of them already but we now get clearer detailed images of the sets. They are slated for release in March. Warning: There might be some spoilers for the movie in these sets.

Update: I’ve been told that some of the sets have started to show up at Target way ahead of the March release. 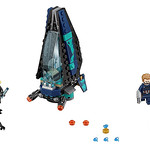 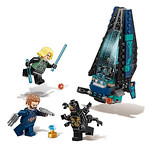